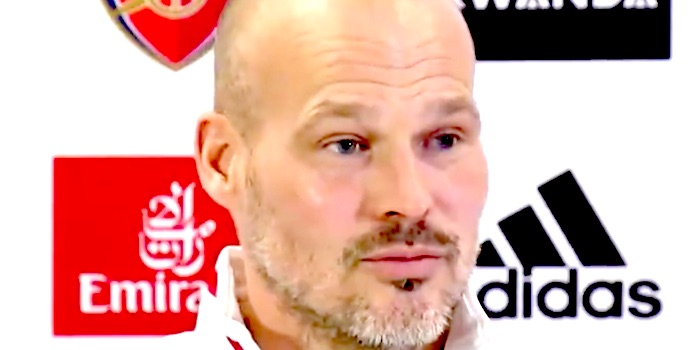 After Sunday’s 2-2 draw with Norwich at Carrow Road, Freddie Ljungberg pointed to the fact his team was caught out in transition more than once.

“The problem I think is that everyone can see that we had problems in transitions while we had possession, so that’s something that’s easy for a coach because we know what we need to work on.” he said.

“That’s to lock and not get countered on in those ways.”

Now, having watched the game again and studied the data from the performance, it seems clear he views this as something he can focus on and fix in the short-term.

Speaking the press ahead of the visit of Brighton to the Emirates, he again focused on that area of our game, saying, “Of course there’s a lot of reflection after a game, I’ve watched it twice now.

“The general feeling is probably the same as I had after the match, we started extremely well, played very well offensively but had a problem transition-wise so they got shots on target and chances just from the transition of an eight-yard sprint, which we need to stop.

“The main thing I saw in the game is that we let them get into situations where it was just a sprint. It was not about football or technical stuff, they just went in a competitive sprint with our player.

“We want to stop that, so that’s something we will focus on.”

He also touched on the attacking areas, looking for his side to continue to find spaces in front of the opposition defence.

“Other things is that my feeling that we got in behind their midfield and behind their backline a lot,” he said.

“That has been backed up by data within the club, which we have been sky rocketed up to be one of the top teams in the league to get into the pockets and behind them.

“That feels very good that it has been backed up by the data and the feeling I had after the game, and of course we will try to keep on doing that.”

Anyone else super excited for Thursday?

I would actually like to see the P A L frontline supplied by Ozil. With the rest of the team selection giving us the defensive balance and being able to get ball to that front 4.

May not be this Thursday but hopefully soon enough on a regular basis.

Assuming health of players, how about 4-2-3-1 with Tierney, Chambers, Holding, Bellerin, Torreira (DCM), Willock (box to box), Ozil (ACM), Pepe and Auba on the wings and Laca up top? If Holding is not ready or if Chambers is not deemed good enough to play center back (and as much as I never thought I would say this) I’d probably go with Mustafi over Luiz (switches off too often) or Papa (not comfortable with the ball at his feet and too rash in the challenge on too many occasions). If it is Mustafi and Holding, perhaps Holding’s better positional sense… Read more »

How about Mavrapanos? he is a decent defender and calm at the back, unlike some of our experienced defenders

We have no idea if Mavro is a decent defender. Hope he is but he’s always injured.

So far as I know, Mavro has not been impressing with the U23s lately.

Totally disagree. Pépé has the same level of confidence as I had the first time I found myself in front of a woman, you know what I mean?

Possibly a fair point.
However, keeping him on the bench in favor of a 18 year old, cobbler like Saka ain’t much helping Pepe’s confidence, either.

No I don’t what you mean. The fact is that like many players such as Henry he needs time. He was beginning to show form and then he was dropped and hardly played since and now Freddie shames him openly. Of course he should start.

He’s certainly talking the right way. The team has had issues with the opposition counter attack for over a decade. It wont be a quick fix, but at last we have a straight talking coach, who can see what (and admit to) what we see. My hope levels are rising.

Step 1: Admit that you have a problem.

Step 2: Don’t play Chambers at RB and Guendouzi in deep midfield.
-or something like that.

I don’t think openly criticising a plAyer is a great start. In 22 years I cannot remember Arsène Wenger doing it once which is the way it should be.

A P
Reply to  Martin

Yeah, even when it was indefensible, AW would just not see it.

Pretty sure Emery knew about these issues as well, but I’m very happy that someone at the club acknowledges in a clear & honest way that they too obviously see the problems we fans see. It’s a little yet very important touch at these times.

Yep, agree. And sometimes it helps to dumb it down a little bit for the players too 😉

It’s encouraging to hear the coach see’s the same problems as we do. He’s absolutely spot on, it only takes a sprint, a tiny bit of conviction from the opposition and we’re lost defensively. And it’s so frustrating and annoying to watch

Indeed. AFC is easier to expose on the break than ever. There appears to be no shape at all to the midfield, or the back line, and the players appear not to know what they’re supposed to be doing or where they’re supposed to be. Saw more of this (more of same) against Norwich. However, until the true utility of the players is assessed, it’ll still be a shamble. This whole nonsense about Pepe and training. FL needs to be smarter than that. Geundouzi, for example (and AFC’s poor form not all his fault), though exciting with his flying hair… Read more »

Guendouzi can’t tackle either. I rate him, I’m not slating him here (and he is young, of course), but he needs to work on the defensive side of the game if he wants to play in CM. Because he’s not the most creative of players.

He’s a prospect at this point nothing more. He’s a squad player at the moment, shouldn’t be in an Arsenal starting 11 at this point, just not at the level we need to be in the top 4. Hopefully he improves over time but his lack of speed defensively is worrying.

For me the problem was the position of Joe Willock in the starting line- up. He played in a very offensive position as a no. 10 and even sprinting into the no 9 position where he clashed with Auba that caused a missed opportunity. in transition, he is always out of position to affect the defensive side of the game. especially considering we also played Ozil in the game. the Boss needs to change this reckless attacking formation.

Emery over complicated things…not just for the players but also for himself. The fact that Freddie can eloquently put into words what needs to be done and Unai couldn’t doesn’t make me think any less of Unai. Both of them have to work with players that may not even be suited to the way they want to play. Freddie needs to be given time just as Emery was given time…I think that Freddie may turn out to be pragmatic, but in the real sense of the word and not they way it turned out with Unai.

Staying positive about Freddie and I’m hoping more time in charge of the practices will be better. Key area is to improve the lineup. Really hope to see Torreira starting as DM

A coach who respects fans enough to let them know what the fuck is going on. I like he is really explaining it to us, which makes me much more assured and feeling positive about the next match.

Easy to coach? How must we interpret this being that Emery couldn’t do it in 18 months? Is this a dig at our previous manager?

Not many people would think so. Only possession dominating teams get exposed on counter-attack. Since scared Emery’s Arsenal were themselves cowering in their shell, deep inside their box, we didn’t get counter-attacked. We got bombarded with shots while we had none.

Our deficiencies are of course quite obvious. I noticed that sprint Norwich were doing which got the better of Mustafi and Luiz a number of times so much so I felt they were reluctant to step up and commit for fear the attacker will run in behind them (neither being terribly quick and with only Kolasinac in backline with any semblance of pace…he recovered one ball very well) BUT if we are more compact and back each other up (basics) we will minimize this. We saw this with Granit in one instance tracking back and clearing when Mustafi got beat.… Read more »

Hmm, if only we had a CDM who could break down attacks. Apparently, we have an extra number 10 lately…

I’d like to see Auba, Pepe, Martinelli and Ozil.
Personally I’d go with holding, Chambers at the back with Tierney and Bellerin. At the risk of many down votes, maybe Torreria and Luiz as holding midfielders. Luiz pinging passed to the front 4. Mix it up, what’s the worse that can happen!

BleedRed
Reply to  The Spoon

Lacazette is too key to drop though :/ we started this whole terrible streak when he was injured

Play Laca at home but not away

He’s right about the lack of sprinting part. Some of our players are just slow, but some of them are just lazy, I’m afraid. I think what Freddie is saying is that he wants more effort when we are tracking back or chasing a 50/50 ball. He’s spot on here.

Our midfield is just poor. Poor defensively and offensively.

Brighton played with lot of confidence at Anfield esp that connoly guy ,the will give us some headache

We don’t really have a CM who can successfully burst forward (Ramsey), play a killer pass (Cazorla) or carry the ball (Wilshere) anymore so wide forwards are key to us creating space AND chances.

The best way to fix our transition defense issue is to get Xhaka out of there (and even possibly Guendouzi) and get Torreira in and even Willock in the Guendouzi role. Guendouzi and Xhaka both lay off way too far of players in the middle 3rd allowing them to receive with no pressure and then find the perfect pass in the counter attack.