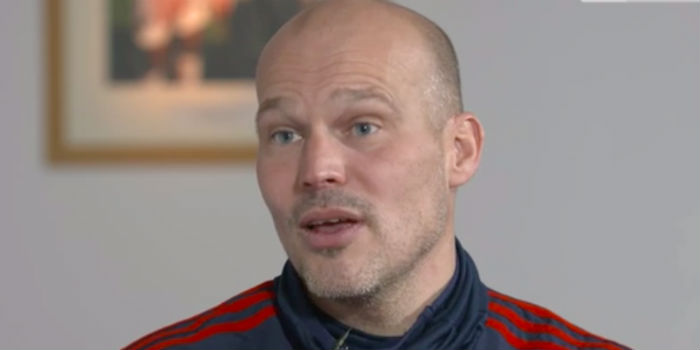 Freddie Ljungberg says he’s very impressed by the energy and willingness of Arsenal’s youngsters and revealed he’s equally pleased with the way his squad’s experienced heads are trying to help them improve.

The Swede hasn’t been afraid to throw the club’s teenagers into the fray despite our poor form with Joe Willock, Gabriel Martinelli, Bukayo Saka, Reiss Nelson, Emile Smith Rowe all making appearances during his four games in charge. A host of other Academy prospects also made the bench for last night’s 2-2 draw with Standard Liege.

While Freddie doesn’t mind giving them the first team minutes they need to develop as players, he has warned that people need to keep their expectations in check.

“They’re young kids, I try to remind people they are young,” he told Sky Sports ahead of Sunday’s match with Manchester City at the Emirates.

“We should not put the hope of our club on the young ones. That’s too much pressure.

“For me, if they’d have been out on loan before or had a 50 to 100 professional games in men’s football then they would have made their mistakes in those clubs.

“Yesterday, we played and sometimes there will be mistakes. People talk about them making a mistake and yeah [they do], but that’s normal with a young player. They will learn from it. It’s the only way they will get better, they need to play.

“I’ve been very impressed with them and especially the energy they give. They are not scared, they make mistakes, they go again, it’s a pleasure to see.

“At the same time, we can’t forget the older players that give them a framework, talk to them all the time, try to give them advice. That’s something, I’m proud of the old guys, they are really trying to help them.”

Freddie was also quizzed on whether he might want to take the head coach position on a full-time basis. Since being made caretaker a couple of weeks ago, a host of names have been linked with the role. Ljungberg obviously has a hands-on opportunity to stake his claim, but he maintains he’s solely focused on the day-to-day.

“It doesn’t really matter [whether I want the job],” he said. “I’m here to be here day-to-day and I try not to think any other thoughts because it’s irrelevant really. I’ve been given a task and a job and I try to concentrate on that as much as I can.

“There’s been no discussions with me about transfers or anything like that. All I’ve been told is that I’m to do this day-to-day and they’ll let me know what they do. I respect that and I just try to do my job as well as I can.”

Which “experienced stars” is Freddie referring to?

Aubameyang, Leno, Luiz who, even if his performances have been bad, seems to be quite the nice guy?

Cannot disagree about Leno who along with Martinelli are the best duo of goalkeepers I consider we have ever had at the club during my 65 years of support. But in all honesty, it’s the youngsters like Martinelli, Torreira & Saka that have often been the backbone with high workmates that their more experienced colleagues seem to be unwilling or unable to emulate.

I like Freddie. Like the way he talks and the sensible things he says. It’s been said he’s a good coach but it takes far more than that to be a top level manager. I like the way after two games he tried something that seemed glaringly obvious to most fans in his selection of a front three. Making decisions based on what he is seeing. There’s a lot of unknown with him but more than any other candidate i find he’s the one I naturally feel is made of the right stuff for us. I have the sense that… Read more »

I was thinking today – why is Arteta considered such an improvement on Freddie?

If it’s just the Pep thing I can think of a lot of assistants for big managers who were shit themselves. I just think that bringing in Arteta would a) be a massive snub for Freddie and b) would not necessarily be an upgrade.

I like Freddie but we need to be careful to avoid the Man U mistake of appointing someone (ole Gunnar) primarily based on the feel good factor it brought to the fans. This is a massive job right now trying to turn this ship around. If Freddie holds it until year end and manages to make a proper run then he can move into the discussing. But as of now he really hasn’t done anything to argue he should be given the job full time. He simply hasn’t been in the job long enough – most of the sentiment of… Read more »

I agree mostly. But by that rationale it puts Arteta out of the running too.

Arteta is very highly thought of & has spent several years as the number two to arguably the top manager of the past decade. He’s still a major risk though. I prefer we do anything we can to get Pochettino

I love the idea of signing Pochettino. But i highly doubt that the sh*tty board does want to have him. I mean 3 rounds of interviewing??? This is madness! Look at Spuds! Daniel Levy and bang! They signed Mourinho. Arsene Wenger has just said how Arsenal slowly slipped away from his hand. There are many people in this club who are responsible for appointing anyone. This shouldn’t happen. In my opinion appointing a head coach should be the matter of Edu-Technical director and Raul Sanllehi – Director of football. There is no need for Vinai and Huss Fahmy to take… Read more »

Kanu Believe It
Reply to  JamesGodwinson

Tbf, you can bet your hole Levy had been in touch with him for months before.

I agree, no point replacing my dear and fellow country man Freddie with someone unproven. If we get a top top manager, on par with allegri, It makes sense. But I am also hesitant on Arteta. He would be a massive assistant to Freddie, as I think Freddie is more a people and individual coach than he Is a tactician. Arteta seems more the opposite = great combo

Would love it too but can’t see Arteta leaving his place under Pep to come serve under Freddie, that would look like a step back. The other way around – Freddie under Arteta – should be considered too, but I don’t see that happening either. Agree that Arteta might be a greater risk compared to Freddie, who had a special bond with players and fans. But at the same time I feel Arteta’s potential is also bigger, when I hear Pep speaking about him, our even Gabriel Jesus lately. So for me, based on his debut, Freddie has earned the… Read more »

Love Freddie, doing the best he can and making a difference. The youngsters are performing well, amazing even considering some of their experience levels. The issue is more with some of the experienced players making rookie mistakes. Xhaka has to go and be replaced. A centre back is essential and really a left back. Not going to happen but I hope we do something in January to help the squad. Arteta for me, has the special city sauce, knows the club, rated as a top coach and eager to prove himself. Him, Freddie and another invincible and we could be… Read more »

Also as another point, I dont for the life of me understand why we dont ask Keown to help coach our defence. He’s done it before, did a great job and reckon he would be happy to. No-brainer surely?

We’re too good to go down (or there’s a lot worse teams than us) so let him have it until end of season as we’re unlikely to win anything anyway, at least we can marvel at his handsome face and galvanise behind his sensible interviews.

There should be discussions re: transfers even with a tempirary Manager. Scouting etc shoukd be a continual process so if a auslity centre back bdcomes available we shoukd swoop

There is another can of worms. Why wouldn’t the club ask him, since he is the one looking at what the players are capable of, where he thinks we need immediate improvement? (He is a candidate for the permanent job. Right?) It is already mid December. I would be surprised if Freddie was not our manager at the end of May. Have a feeling that KSE has no intentions of hitting the transfer market in January, and has implicitly told Freddie to do what you can with what you have.

You can bet Freddie is on a fraction of what Emery was on, and then all his staff. Freddie doesn’t even have any staff and it’s quite remiss for Edu & Co not to arrange for some temp staff to help him out….and I’m not talking about Per and Sal. There’s been talk about the candidates having to undergo some Apprentice type interviews, but it seems to me as if Freddie is the one being made to carry out difficult and sometimes impossible tasks week on week. If Raul tells him he’s fired at the end of it I’m going… Read more »