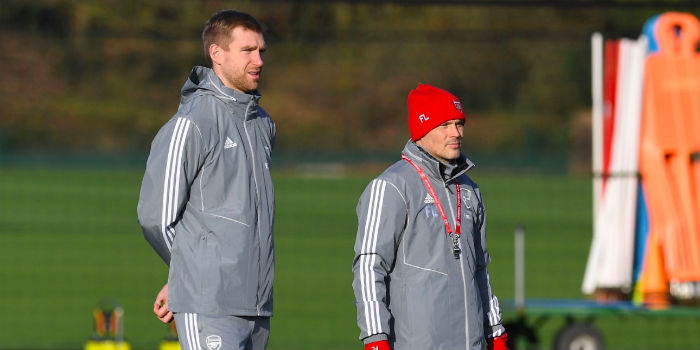 Freddie Ljungberg says his squad selection for tomorrow’s game with Standard Liege has been influenced by injuries and the fixture schedule but he maintains Arsenal have enough firepower to get a result in Belgium.

The Gunners must avoid a defeat by five goals to secure safe passage to the knockout stages but will have to complete the group stage without a litany of first team regulars following a deluge of injuries.

On the eve of Monday’s win against West Ham, the only players sidelined were Rob Holding and Dani Ceballos. Since then, Hector Bellerin, Kieran Tierney, Granit Xhaka and Pepe have all picked up problems. Shkodran Mustafi, a regular in Europe this season, is also suspended. In their place, a number of Academy starlets made the plane this afternoon.

“We have a few injuries,” the Swede told his pre-game press conference. “We’ve played a lot of games lately, we have another game on Sunday.

“We brought a lot of firepower here. We have younger players that played in the group stages, it’s a big game and we’re here to get a result. We have a lot of respect for the opponents.”

The Gunners cruised to a 4-0 win against Standard Liege in October and have recorded wins in two previous encounters at the Stade Maurice Dufrasne; 7-0 in 1993 and 3-2 in 2009.

“It’s a very important game for us, we know what’s at stake,” said Ljungberg. “They probably need to win the game.

“We play a lot of games. Sometimes we have to change. We have a lot of respect for the game. We don’t take it lightly. We want to win and get a result.”

Quizzed on the pedigree of his next opponents, he added: “They’re well known in Europe.  Of course, I knew about them beforehand. You could see that they try to play football. I like how they play.

“I’ll try to come up with a gameplan that doesn’t suit them. I have a lot of respect for them. They have a great coach.”

“A game plan that doesn’t suit them”. Make life difficult for them on their home turf. That will be classic with a table topping win.

I haven’t watched the interview but in my mind I’m hoping…
– all those injuries aren’t too serious
– we used the chance to get youth to Belgium
– Freddie is lying his arse off (to aid our focus/pressure; for our team morale; not disrespecting opposition)

I love Freddie’s clarity and honesty, but basically I’m also hoping Freddie is learning the delicate art of lying your arse off in interviews.

In a nice way.

I fucking well hope so. And I hope we do not take Liege too lightly. We look precarious in Europa and as much as some would argue to focus everything on league, we should not be putting all our eggs in one basket either. The right balance of youth and experience necessary. BUT above all, I should be looking for work ethic off ball if I were Llungberg. You look at Pepe, scores a great goal and assist and all of a sudeen some foolish voices singing his praise like he was MOTM. Sure he makes a difference for us… Read more »

Mate this isn’t your blog, it’s arseblog. No one minds you posting a comment but your three huge anecdotes are really pushing the button ya know? Maybe consider toning it back.

As for manager potential.

a) Arteta will play the same tactics as Pep and Unai. Not what we need certainly for this team. PLUS he doesn’t want to come to Arsenal.

b) Viera has struggled at much lower level Ligue One.

Get it wrong, have to revisit the whole thing again in 3 to 6 months, with impact to our key players,,,even more complicated summer rebuild.

you’re having a laugh.

…and if anything, I’d keep my eye out on developments on the continent rather than setting my sights low on Arteta and Viera alone. 1) Bayern are OK in CL not particularly convincing in Domestic form. The club may pull the trigger in Jan. 2) Barca’s Valverde isn’t entirely popular. He’s doing decent at the moment but things can turn very quickly (ditto Zidane to a lesser extent) 3) Ancelott just got the boot in Italy. Not entirely great to take on someone recenty fired but he had a difficult task turning around AC Milan in current incarnation even with… Read more »

The Voice of the Noise
Reply to  Santori

Ancelotti got fired in Napoli, nothing to do with AC Milan or Gazidis.
Have no idea who this “Ponchentinno” is…
Also, what has all of this got to do with the actual article?! Just make your own blog, if you want to continue to write all this on totally unrelated articles ffs.