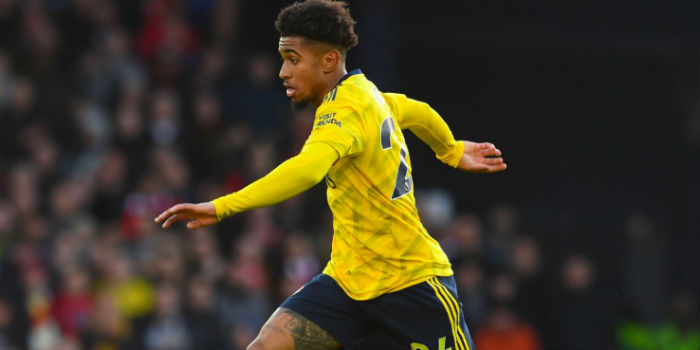 Reiss Nelson says Arsenal’s youngsters did their best to show new coach Mikel Arteta what they were made of after Freddie Ljungberg fielded five Academy graduates for his final game in charge at Everton.

Emile Smith Rowe, Ainsley Maitland-Niles and Bukayo Saka joined Nelson in the starting lineup at Goodison Park with Joe Willock coming on in the second half. Another teenager, Gabriel Martinelli, played the full 90 minutes of the 0-0 draw.

While the game struggled to spark into life (it was probably the most boring game we’ve played *checks notes* since last month’s 1-1 with Vitoria) you couldn’t fault the effort of the players.

“All the boys wanted to show him what we could do because it was his first time seeing us live,” said Nelson.

“He [Arteta] watched us and we need to take that into our next games. We need to be confident in ourselves.

“He was just there for support, to give us a pat on the back and some inspiration. I think that helped a lot.

He added: “We played with an urgency, with pace and a big confidence. That started this afternoon so now we’re ready to go.”

Nelson also bigged up the fact that the Gunners kept a clean sheet; the first time we’ve done that in 15 games.

“We wanted to do that,” said Nelson. “It was one of our main targets. We wanted to win or keep a clean sheet away from home and we were able to keep the clean sheet. The young boys were excellent and it was a good achievement for us.”

Surprised Nelson started really. I was hoping that loan spell would bring him back a confident attacking player but it’s been disappointing really but he did start showing flashes of skill in the 2nd half. Hoping he can develop further though otherwise we may have to make a decision in the next 6months or so

I don’t think Nelson will make it as a winger. He’s got good dribbling but not enough drive or hunger right now.

He’s just turned 20….. He’s a big talent, with a big future. We probably should have kept Mkhitaryan and Elneny, and loaned out Nelson, and one of Willock/Smith-Rowe, to get them 40+ games, and also keep a bit of experience in the squad. But writing off 20year olds, off the back of a few lacklustre performances, is plain ridiculous. Even players like Messi, Ronaldo didn’t come through and become regular scorers until they were 22-23 Look at the stick Sterling was taking just over 2 years ago We’ve got a talented group of young players, we need to get behind… Read more »

Tbf almost everyone in the team looks shite atm. Let’s hope they all pick up otherwise we’ve got a helluva lot of decisions coming up!

A bit sad really to hear a player say keeping a clean sheet is ‘a good achievement’ . I would say it was a good first step…of many.

We have a manager with such great potential. I hope he is ruthless, these players have let the club down so badly for a significant part of this year.

I liked how Freddie in some ways hung Ozil out to dry by saying he wasn’t going to be picked no matter what. This team needs discipline so good to see Freddie and Arteta stressing accountability

Either the decision has already been made on Ozil or he is going to hopefully get a real quick hard dose of Moderately Good Copper v Bad Copper. I would say to Ozil…you need to run into these pads for 2 hours at full pace. Head it, the pad a few times. Then you can practice with the team.

Given the young players that we were playing, a clean sheet is a good result for an away match where the opposition has had decent results in the last three matches.

On the bigger scale of things not a good match, but expectations are very low this season.

The celebration of a 0-0 draw while Spurs are getting close to top four after being 12 points below, gets me really mad.

Which also says fortunes change fast. So lets not weep in dispair just yet.

No manager could change anything with these defenders. We need a major overhaul, and then things can get better.

Bloody awful game yesterday, but a decent result. A point and a clean sheet at Goodison Park can’t be sniffed at. The lack of quality in both teams was stark. At least we had an excuse as we were playing so many kids. I bet Arteta was secretly crapping himself thinking: “How am I going to turn this lot into a winning team?” With a lot of money is the answer. No Ozil was no surprise. Hopefully this farce will come to an end next month. It wouldn’t surprise me if he and an irate Josh have had a few… Read more »

I think we’ll be struggling for a while, regardless of who the manager is. My worry is we’ll lose Xhaka in January, I think he’s our most important central midfielder, that might say more about our options, than it does about Xhaka…. But…. he’s still our most experienced central midfielder, and currently our best option IMO We know it takes players a while to settle into the intensity of the league, and It’s unlikely we’d be able to convince a PL team to do business in Jan. We’d be gambling that Edu will identify an upgrade, and not a downgrade,… Read more »

“What, you egg!”
That was simply a clean shit!

The headline here typefaces it as it seems. What a joke? Pont’s before clean sheets. Thank that Arteta has already acknowledged these kinds of wrong mentality and has vowed to work on them. Right thinking/thoughts, right products/produces.

im sure the teams everton beat recently would of liked a clean sheet/a point at least.

Come on, Everton has become Barcelona with a very short run of a couple of victories and draws against good teams?
Aren’t you disturbed even our young boys got contaminated and have no confidence?
I want kids to come out and say: We should have won the game.
Not one who was so satisfied and sort of said : We showed the new boss what we are made off.

Nelson had a good game after not receiving a lot of help from Emery’s chaotic reign. He worked hard and kept position quite well. Hopefully Arteta will finally bring structure and organisation to support the players.

The defensive shutout was important and Leno finally got out of the firing line!

I find the tone of comments across the site a little disturbing. Everyone seems to agree that we are in the early stages of a more extended project, the current team is unbalanced and ill-disciplined for top-level competition, and that young players need time and experience to develop. Yet at the same time, the majority of posters seem to be quite eager to be dismissive of any positives, seeking to make hot-takes and take extremist stances on everything and everyone. Gross examples of entitlement are rampant. For example, posters complaining that the team celebrate a clean sheet away from home… Read more »

Wish I could thumb you up a million times.

Watch what happens in short order. Chambers and Holden will be used as the balance to Papa, Luiz and possibly Mustafi. Arteta will become a fav if he gets the midfield to function as a balanced attacking unit with defensive stability. We have the players to be top 6 and fight for top 4. Hopefully the fans will relish and embrace that fight for 1.5 years. I am most interested in what happens with Auba, luckily I think that either leaving or staying can be a massive positive going forward. Leaving might just take an extra 6 months to realize… Read more »

I’m sorry but “win or keep a clean sheet”?
Thats a pretty low bar to set against a team whom we would never have worried about.
Whats wrong with building the players up to win AND keep a clean sheet? I believe we have done that many many times in the past with accompanying derisions of “Boring Boring Arsenal” and the ever so famous “One nil to the Arsenal”……

Oh the halcyon days of yore….

“… for a team we would never have worried about”,