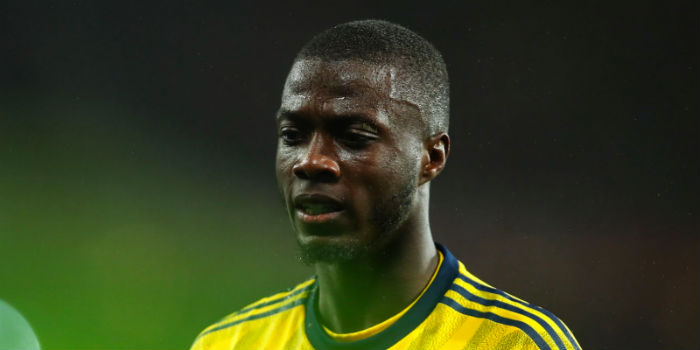 Nicolas Pepe has admitted life at Arsenal has gone well for him since his £72m arrival from Lille in the summer, and that the departure of Unai Emery was ‘painful’ for him.

However, he insists it’s in his own hands and that he has to work hard to earn a place in the side under interim head coach Freddie Ljungberg.

The club record signing hasn’t had the impact we all hoped he would, and although he’s well aware of it, his attitude is promising – determined to make things better.

“Losing Emery was painful for me,” he said.

“He’s the coach who brought me here. It’s painful. Freddie? He used to play so he understands me. It’s up to me to win my place.

“My first four months have been negative overall. I’m not at all satisfied with my stats. I was signed to make the difference and I’ve not done that.

“I need to adapt, especially to the box to box element of Premier League.

“I Need to finish my chances.”

Arsenal are only six points from a relegation dog fight.
They need to wake up and start winning games…

Just put him on the pitch. This is madness.

Ljungberg is turning out to be as bad as Emery himself.
Or perhaps Arsenal are just a very very poor side…

When other players are not performing well around him, how can we expect him to stand out? Pepe hasn’t been excellent, but the service around him has been awful.

Bar leno we are shit overall. Complacency has crept into every corner of this team. Only player with fight is Gabi

I am not buying this Pepe nonsense, the formation is dead, we need winger on the wing not ozil and auba. Freddie should better stop this rubbish, its clear for everyone to see, Ozil and willock are not producing, auba has not turned playmaker on the wings. Why can’t this club put people were they can excel for once. How many years do we need to wait to see martinelli start when we are yet to win in eight. Get players that can run at fullbacks in there, the whole left wing is just nonexistent am so done! If freddie… Read more »

Well done Freddie.
Lets get a REAL manager in…
And end this fucking shambles as soon as possible before we are relegated…
Ljungberg is WANK

As a club from top to bottom we’re in trouble and it’s going to be difficult to get out of .

someone
Reply to  Snagger

And why would that be , Freddie has done nothing to suggest he is capable of managing at this level , we need an experienced manager fast.

You earned your place baw. Our coaches are effing the lineup. No reason to start Ozil out wide and Willock behind. No reason at all. Freddie made a change at half because he got it wrong like Emery did countless times. And we looked better to start the half with you.

He made a big difference to the pace of the attack when he came on last night. Just play the guy. He’s never going to adapt on the bloody bench, and at least he can take people on and get the defence running backwards towards their own goal. Saka, for all his ability is too young to be being asked to turn games around in this terribly fragile team.