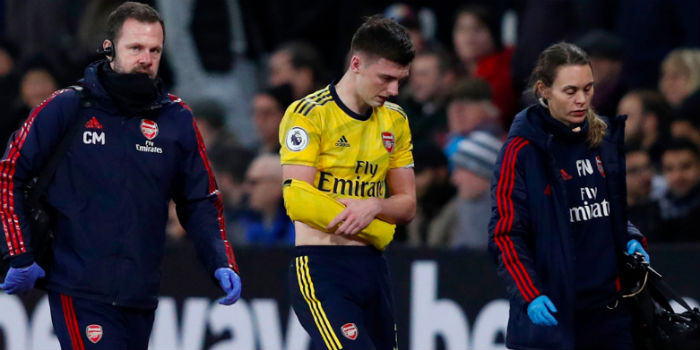 Kieran Tierney has had successful surgery on his dislocated shoulder, and now begins his rehabilitation.

The 22 year old has had a difficult start to life in North London. A £25m deadline day signing, he arrived with a pelvic/hip injury which delayed his debut until the end of September when he played in a 5-0 win over Nottingham Forest in the Carabao Cup.

Since then he’s started eight times, and come off the bench twice for a total of eleven appearances.

It’s unfortunate for him on a personal level, but also for Arsenal. There are fitness concerns over Sead Kolasinac who appeared to suffer a sprained ankle in the 3-0 defeat to Man City on Sunday.

It’s yet to be revealed how serious that problem might be for the Bosnian international, but without an obvious candidate coming through the youth system, we may have to ask Ainsley-Maitland Niles to fill in there if he’s out for any prolonged period of time.

It’s not ideal at the most hectic point in the fixture schedule, and it’ll be a challenge for the club – and the the imminent new head coach to deal with.

Wish you a speedy recovery lad – we already miss you

Injury prone alarm bells ringing. We might aswell buy ankther left back in January aswell as a right back and centre back

Yeah, injury prone players just pop their arms out of the sockets left and right… Give the guy a break.

for all the attacking talent that is progressing up from the academy… why are we so bereft of defenders and DMs ready to fill the gaps and challenge for spots?

Because nobody wants to defend? I can see some of our first team players don’t.

why oh why oh why did we sign him in first place. what a disaster

Maybe because he’s rated as one of the best right backs in the country. Dislocating his shoulder could not be forecast.

I meant left back

You mean the other right 🙂

It is desperately unlucky for both the club and Kieran. I hope he makes a speedy recovery. With regards to solutions at left-back, I’m not sure why our youth team keeps getting overlooked. We have a very capable young left-back in Tolaji Bola who has been with us for a number of years and a lifelong Arsenal fan to boot. He has represented England at U16, U17 and U18 level. Rather than playing our first team members out of position, surely times like these call giving our academy graduates a chance to prove themselves. Why else keep them on the… Read more »

I’ve watched Bols a couple of times. I very much doubt he can deal with the pace and power of the PL yet.

We need to add a fullback in January. Tierney is out till March, Bellerin is still recovering and will probably continue to miss time, Kolasinac is injured now too. Ideally we’d find a solid defensive fullback who can do a job on either side. Don’t need a star, just an affordable, versatile guy who knows how to defend and who has awareness and will put in the effort. I’d hope we’d add someone like Connor Roberts at Swansea and the Welsh national team: 24 years old, shouldn’t cost much, has played both sides, not a world beater but could do… Read more »

The glass was barely half full but City just drain it.

I hope Kolasinac recovers quickly. It may have been a wise thing that he had the sense to signal to be taken off to prevent worse damage. I have not seen a “Tierney masterclass” this season. He’s been decent but no better than Kolasinac has. As mentioned always we need BOTH to be performing at high level. Saka has come in to put in an admirable shift imo, a good if risky call by Llungberg he got right. BUT we will need Sead to come back in sooner than later with again some very big fixtures through the new year.… Read more »

the whole situation reminds me of another full-back we’ve signed a couple of years ago from Newcastle. Let’s hope it doesn’t wnd the same way!?