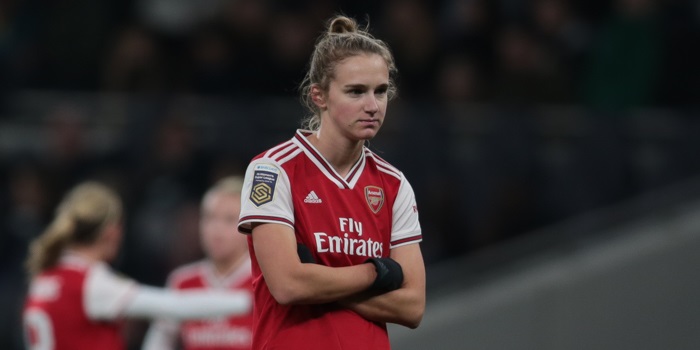 On the team’s performance…

We played really good football today, it was a great team performance. We maybe expected Bristol to do a bit better after we beat them last week (in the Conti Cup), but we made it hard for them and this time we didn’t stop playing, we kept going and had a great performance for 90 minutes. We wanted more goals and that says a lot about the team today.

On sending a message to the rest of the league…

We want to win the league again and we want to win the Champions League. We know the last couple of games have been a bit [makes noise to indicate ‘mehness’]. We won our last two league games 1-0 and 2-0 and we know that might not be enough at the end of the season. We improved our goal difference today and that might make a difference in May.

On whether she feels close to full sharpness yet…

I feel a bit closer but I also can’t wait until the Christmas break! It’s three more games so we need to focus and win our league games and win the League Cup game, that’s our main focus and then we can rest and go again in the New Year.

On playing with 3 at the back today…

We have a lot of options going forward and what you saw today was us creating more space for ourselves, we played Bristol last week and we knew the areas where we could hurt them. We have the players to play 3 at the back or 4 and that really helps us.

On whether the team discussed improving their goal difference…

We didn’t before the game, but at half-time we did say among ourselves that this game is one where we can work on our goal difference and we did that in the second half. It would have been easy to play a good first half and then drop off in the second, but we kept the level up this week.

On a tough away game against Reading next week…

We just need to be confident, we know Reading is always a tough place to go, we need to be ready again. We have the full week to prepare, we need to train as well as we did this week.

On the team playing with fluidity in attack…

We have lots of players that can get into the area, Lisa, Beth, Jill, DvD, we have a lot of power going forward and that’s the good thing about playing in this team, we don’t have to stand in our positions and we can mix it up. I am really happy with that, that suits me and I think it suits this team.

On her Ballon D’Or nomination…

*shrugs* I don’t know, fine, I am not going to the ceremony, I am staying home and preparing for the Reading game. Obviously it is an honour when people are voting for you, but it doesn’t really do much for me.

Viv coming off. Not sure I’ll ever see a performance like this from an individual player again. Truly special. pic.twitter.com/XDcUqmCnXu

A truly breathtaking performance. She is the ?

Way to go ladies, credit to the club. And 6 for Viv, can she do a shift in the mens team as well 😉

She’s better than half of our mens first team

Get her in the mens team now!

6 goals and 4 assists!? That is some Captain Tsubasa stuff.

And not fully fit supposedly!!!

Hopefully she will do better once she is fully fit…

It did wonders for the goal difference as well !

Her mentality is scary. No interest in individual awards and thinks she can get fitter. Wow what a footballer. A lot can be learned from Viv and her attitude.

Her continued emphasis on being a team player is wonderful. Obviously involved everywhere today but those games where she drops and looks for the runners show her as equally influential.
So happy she’s a gunner

A privilege to be present at the game today. Alright, Bristol were poor but no matter what opposition are put in front of this team they give them respect. Before thrashing them. The whole team were outstanding and Viv is….Viv.
Footnote:- Q. Who amongst the squad has an even better ratio of goals to minutes played than Viv since May? A. She is Scottish and has a wicked left foot (not Kim!)

Correct! I nerdishly calculated that since the last game of the season v MankC Mitch had a cumulative 130 minutes of action and had scored 3 goals. Quite a feat for a left back???