THE LOWDOWN
Arsenal take on Chelsea at Meadow Park on Sunday for a huge game that will go a long way to deciding the destination of the WSL title. The Gunners lead the visitors in the WSL table by 4 points currently, though Chelsea have a game in hand. A victory for either side would see them instantly installed as title favourites.

The Gunners have won every single game at Boreham Wood for a year now- the last team to take points from them on their Hertfordshire patch? Chelsea, a year ago this weekend. The Blues were 2-1 winners on that occasion and as an additional curiosity, Arsenal haven’t beaten Chelsea at Meadow Park since a Conti Cup encounter in July 2014. They haven’t beaten them at home in the league since 2013.

The match will be billed as a shootout between Vivianne Miedema and Sam Kerr, but that is reductive, both teams are packed with attacking and creative talent and carry threat from all areas of the pitch. Chelsea beat Arsenal 2-1 in the reverse fixture thanks to a long-range goal from a defender, while Danielle van de Donk was Arsenal’s scorer.

Our @BarclaysFAWSL clash with Chelsea has now SOLD OUT ?

Thank you for your incredible support – and we'll see you all on Sunday! ?

The game sold out days before kickoff which is virtually unprecedented at Meadow Park. Arsenal have turned away scores of press accreditation requests due to the level of interest in the fixture. The reality is that Arsenal, Chelsea and Manchester City are locked in a three-way wrestle for the title and each team is beating everyone they ought to.

That means the games between the teams themselves have outsized importance. This is a proper 6-pointer of a contest. After this match, Arsenal’s next WSL game is away at Manchester City. It is no exaggeration to say that the next two games will go a very long way to deciding whether Arsenal retain their title. Strap yourselves in; it’s going to be an anxious afternoon.

TEAM NEWS
Jen Beattie is expected to be available after a calf injury, but may not start having not played for just over a month and with Louise Quinn and Viki Schnaderbeck both available. Lia Wälti, Viki Schnaderbeck and Vivianne Miedema were rested to the bench for Wednesday night’s victory over Reading, which suggests they are in line to start. Katrine Veje (foot) is unlikely to be available, but not far away from inclusion. Danielle Carter (knee) is out.

LAST TIME OUT
Arsenal took an early lead in the reverse fixture in October thanks to Danielle van de Donk, but Chelsea took all three points with second half goals from Beth England and Maria Thorisdottir. In this fixture last season, the Blues were also 2-1 winners thanks to a brace from Erin Cuthbert, Vivianne Miedema’s late consolation wasn’t quite enough to claw back the deficit.

THE OPPOSITION
After a difficult season by their standards in 2018-19, Chelsea are once again fighting for the league title that they won in 2017-18. Emma Hayes’ team are looking to challenge Lyon’s hegemony in Europe and Arsenal’s in England and the signing of Sam Kerr this January is a receipt to that effect. They pushed Lyon all the way in last year’s Champions League semi-final too.

Manager Emma Hayes was part of the coaching staff when the Gunners won the quadruple in 2006-07, but recently celebrated 200 games in charge of Chelsea. She warmed up for this fixture with some mind games too, questioning whether Arsenal are overly reliant on striker Vivianne Miedema. “If you took Miedema out of their team, how many goals would they have?

“She has been the difference. Fair play, she is an unbelievable player, but we have got to make our multiple players count. It’s not just about ‘a Miedema.” Emma is a smart coach and knows well that Arsenal offer a variety of goal threat, but she has always been outspoken and unafraid to ruffle feathers.

Putting her head in where it hurts! ?

PLAYER TO WATCH
With goals in her last two WSL games, Jordan Nobbs is close to getting back to her best after returning from an ACL injury in September. Joe Montemurro always said it would be after Christmas before we saw Jordan back at her best and the signs are there that Jordan’s athleticism is returning and she is getting into good positions in front of goal again. 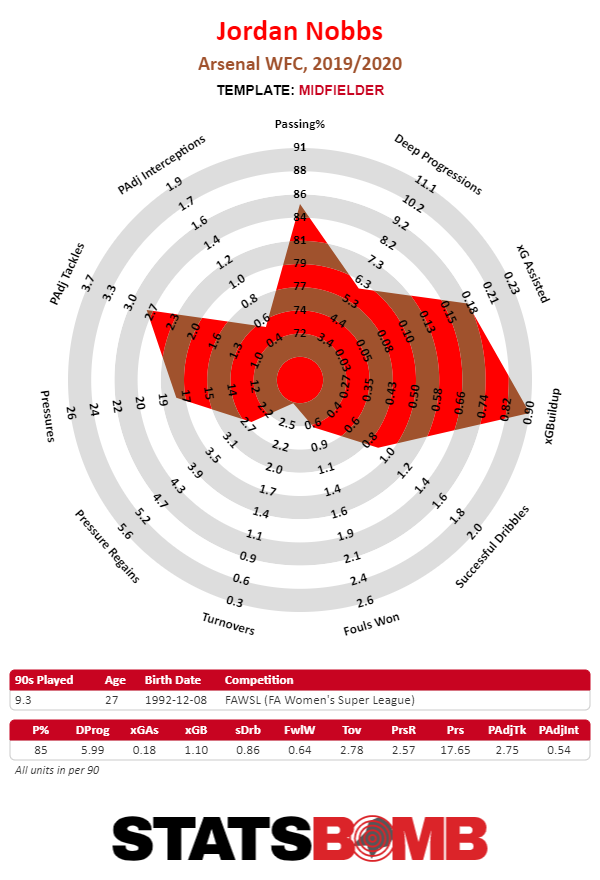 After last weekend’s win over Brighton, Joe Montemurro told me, “She is getting into very good positions. What I need from her now is just a little bit more with the ball, just finding the pass or preparing the play or to play forward and hurt teams. Jordan is so good because she’s always proactive and always trying to play forward, sometimes it’s a matter of preparing the play and going the other way.

“Now she’ll find her decision making rhythm and she’s now getting into the areas we want to get her into.” Both teams are jam-packed with potential match winners, but at full tilt, it was Jordan who tore Emma Hayes’ side apart last season in a 5-0 win for the Gunners, due to her tireless running from midfield. Jordan has the ability to lift the tempo of a game and sprint away from a marker in the blink of an eye.

THE DATA [POWERED BY STATSBOMB]
Arsenal have a non-penalty XG of 2.11 per game, Chelsea have 2.51

Arsenal have a non-penalty XG conceded of 0.59 per game, Chelsea have 0.51

Despite having 66% possession v Brighton, Arsenal had more pressure regains [39] and won more tackles [18] than their opponents

Arsenal haven’t beaten Chelsea at home in the WSL since 2013 and have lost their last three games against Chelsea in all competitions. Chelsea are also unbeaten in 26 WSL away games

The Gunners have won all of their home games since losing to Chelsea at Meadow Park a year ago this weekend.

HOW TO CATCH THE GAME
The match kicks off at 2pm on Sunday at Meadow Park, tickets are completely sold out. However, you can watch the game live on BT Sport in the UK, or else you can watch it for free on the FA Player app wherever you are in the world.

COMING UP
We’ll have exclusive player reaction from the game on the site on Sunday evening, as well as all the usual coverage of the FA Cup game at West Ham next weekend. If you haven’t read already, why not take a look at our exclusive feature interview with Jordan Nobbs, Kim Little and Joe Montemurro on the Little Nobbs midfield partnership, after both players hit the 200 appearance mark for Arsenal this week.

Two games against Chelsea in 3 days, I can’t wait! COYG ?⚪

Not having Beattie will hurt, I think–and Arsenal’s centerbacks will need to be alert and good in this game as Kerr thrives on counter-attacks, and England can certainly score as well. Midfield play, as always, will be key. A bit surprised that Mead may not start. Big game–need a win.

Thought Meado looked a bit off the pace on Wednesday and she got cramp, but she might yet play. Agree Beats is a loss, I’d play Quinn myself because she’s good in the air and Beth England scores a lot of headers.

Surprises to predicted selections have been one of Joe’s ploys. Emma Hayes has her little tricks and head games. All this adds to the theatre of the occassion. My own feeling is a stalemate which would probably be a better result for us than Chelski. If we still head the table on 3rd February the title is ours for the keeping.

Games in hand are all very well but points on the board are preferable.

especially when it’s a decent enough Everton team you have to go and play.

What is the problem with playing against Chelsea? I have watched every game for the last four years and apart from one game against Chelsea at their place when the girls played their normal game and beat Chelsea by five goals, every time they play Chelsea they look a totally different team. In fact I’d go so far as to say they look beat before they even start. Today was no different 4-1 to Chelsea, the team do very well against every other team in the league but something has got to change if we are to win the WSL… Read more »

Have you not noticed we are still second in the WSL only on goal difference, above Chelsea, and we could get another 27 points yet?
I am glad that the team do not share your defeatist attitude otherwise they would not win anything.