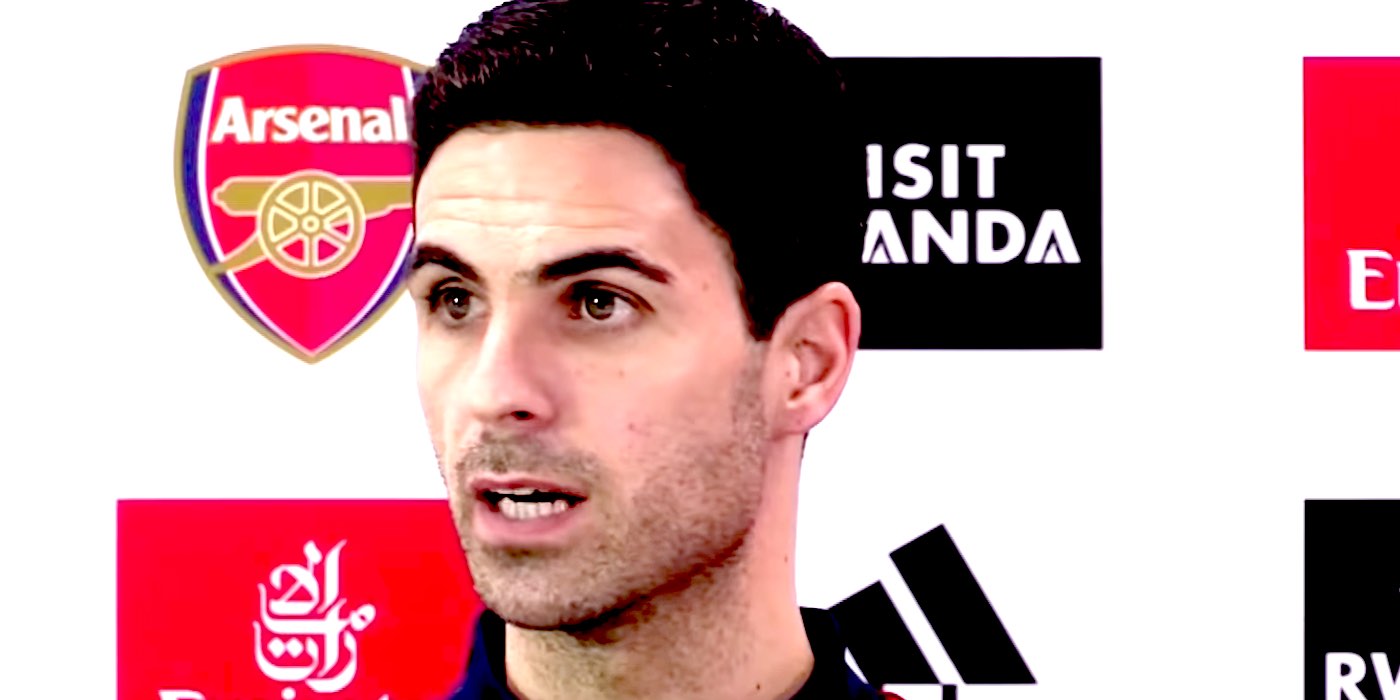 Mikel Arteta say it’s possible that Arsenal may not do any transfer business in January, despite the fact that the squad is thin and does require an injection of quality.

The new manager might have expected some backing from the Football Executive Committee, led by Head of Football Raul Sanllehi, but thus far there have been few signs that any incoming business is imminent.

The Gunners did bring back Eddie Nketiah from his loan spell at Leeds, and have sent the likes of Emile Smith Rowe, Dinos Mavropano and Tyreece John-Jules out on loan, but fans looking for a new arrival or two to help the Europa League push may well be disappointed.

Asked today if the club might not make a signing this month, Arteta said, “It’s a possibility, yes.

“There is nothing new to say on any individual players. When we have more info, we’ll let you know.”

And on how he feels about that, the manager sounded fairly sanguine.

“I would not be unhappy without anyone in because we couldn’t, it’s because the players have to be players who can really help us and make a difference in the squad, not just for the sake of bringing in players.”

It’s hard not to think he wouldn’t want at least one player in to boost his squad, but the decision making lies above.

Let’s see what they can come up with, if anything.

Hints of Le Prof in those responses. If I had to guess, we’re about to announce Messi.

Would be silly to say much, until a transfer is done.

Peter Crouch’s book is interesting on transfers, how little most people in a club know about them.

All that summertime goodwill generated by the fec is evaporating pretty rapidly.

Leeds. Ffs. Typing on a bus

The Spoon
Reply to  NoNeck

Not driving the bus I hope…

Sonaldo14
Reply to  The Spoon

Or parking it at Stamford Bridge.

A CB for the sake of it is exactly what’s gotten us into this mess. We really need reinforcements at the back but we don’t need an ageing stopgap on high wages. Makeshift defenders who were managed well even got us to the Champions League final… It’s not ideal but it’s better than a PSG reject on high wages or Bayern’s answer to Mustafi. This window could end up with a loan signing (but we know from experience they rarely make an impact for us), but if it’s not a meaningful signing, I’d rather Arteta gets to really put this… Read more »

we should be strengthening. Results are way too poor and we should be fighting for 4th place which is possible. Look at what signing Arshavin did for us!

Couldn’t agree more, so many teams improve in and around the January window because of a new addition that gets the fans cheering in the stands (something that’s importance should never be underestimated), and also it gives a few players a kick up the arse to give 100% or risk losing their place. Just because we’ve had a couple of iffy goes in recent years doesn’t mean the club should overlook the potential positives. I, for once, actually believe the current rumours that we’re looking for a short-term option at CB, on loan, until we try again for Upamecano in… Read more »

I’m actually ok with this given Arteta/ Edu are likely still figuring out where they need to upgrade this summer / who will be moved on. Add in that it’s extremely difficult to find quality players available at non-crazy prices & the fact that we’re realistically out of the top 4 race anyways. It’s painful in the moment but I really think appointing Arteta was the club recognizing there are no quick & easy fixes to get where we want to be (challenging for titles & not just scrapping for 4th every year). He looks to me like he has… Read more »

A high energy, powerful, direct, goal scoring No10, who can get beyond the strikers.

More dynamism, quality, and athleticism in the middle of the park.

We’re not short numerically in any area, it’s quality and anything resembling dynamism through the centre of the pitch, we’re currently lacking in.

Wow. If only the club had the insight you do.

The problem with this attitude regarding the January market is that it validates the lack of spending when we need to strengthen the squad NOW in order to achieve anything for the season. If we don’t finish higher in the league, we won’t even be in Europe next season, further reducing our attractiveness to new players and further reducing the spending power of the ‘self sustaining’ model that KSE have forced on the club.

@badaab This is going to get a lot of downvotes but a huge reason we’re in this mess right now is we’ve spent a ton of money the past few years chasing the top 4, but the players we’ve spent it on haven’t produced anywhere near the levels we need them to (Auba excepted). Mustafi & Xhaka were 35m gbp each – Ozil has the 2nd largest contract in the entire PL, Miki, Luiz is on huge wages etc. We currently have the 5th highest wage bill in the entire PL (4m ish behind Chelsea) despite not having played CL… Read more »

Haaland 20mil shows that quality players are available. The problem is as the 10th richest club in football we apparently have no money

Haaland was a bit of a one off as he had a release clause = you didn’t have to negotiate with his club. United however leaked the details of the deal once he turned them down & it sounds like 20m really meant
20m to RB (his club)
12m to Raoila
10m to Haaland’s dad
50% of any sell on fees going to Raola & Haaland’s dad

Mind games. We’re trying to convince Fat Frank that he’s got no bloody idea who’s in his squad and ruin his planning.

I think there’s a lot of unanswered questions about individual squad members, both in terms of aptitude and application, as well as uncertainty about the collective make up of this squad. There’s no doubt that the scale of the job this summer will be huge (presumably with a relatively small budget to boot) so I’m not surprised by this.

Well we are in dire need of assistance. If we were injury free or near injury free ( Ha ! Ha !) we could soldier on.There are always un cut diamonds in the lower leagues if you look. Robertson at Liverpool looks a world beater. Eighteen moths ago he was at Hull – wasn’t he ? Vardy came from the lower Leagues. I just doubt if we have any scouts even looking there. One thing we don’t need is a repeat of last years fiasco with Suarez. All of which leaves Sanhelli standing in the spot light and looking less… Read more »

Ceballos seems to be a repeat of the Sanchez signing. Hopefully he can prove otherwise in the second half of the season.

Eh. Sanchez did pretty well for us

I can live with waiting for the summer if we bring in a quality central defender and midfielder. I just don’t want a dozy left-back looking for a payday with a dodgy agent in tow. We already have enough passengers on high wages in the squad.

*Better having, damned be my english

Jerome Boateng played the full 90 for Munich and kept a clean sheet yesterday so I can’t see that rumored loan deal happening anymore. We do appear to have Holding, Bellerin, and Ceballos ready to play again though, good timing with the Europa League starting again in a few weeks.

I agree with Arteta. The last 5 years of Arsene Wenger’s reign the club has recruited an imbalance squad. With the arrival of Emery they started to balance it a little bit but they still fail to address major areas such as the defense. The club is clearly working on building a balanced team due to the past bad recruitments. And if they are going to achieve that they will have to make well checked and calculated signings. We can’t just bring in players because we have to, they need to be of a certain quality that the manager require… Read more »

at the beginning of the season the squad was definitely capable of top 3, if not 4. In hindsight, we could not have predicted the injuries and underwhelming performance of pepe, laca, luiz, ceballos

If true this is the clearest indication yet that we’re writing off the league season completely. We will have to accept that, despite the talent in the team, we will be a mid table club this season and are going to put all our eggs in the EL, and to a lesser extent the FA Cup, baskets.

Looking at Saturdays game for the second time trying to be objective, it became clear to me that we simply do not have the talent in our squad to meet our objectives if they are to finish in the top four or qualify for the EL. Playing Sheffield Utd was at one time 3 points in the bag. Not anymore. With our current squad we can’t take any game for granted. Our movement is slow, we seem to lack a plan of attack, (at least one they can execute). The lack of movement leaves the players bringing the ball out… Read more »

We don’t expect to beat anyone anymore. That’s the pain of it.

I think Mikel will bring improvements but it’s a long project.

Again those who prefer to believe in Arteta and denigrate Emery should do well to remember that Unai was pretty much working with same assets and thus far, Arteta has not managed to punch any higher even with ‘improvements’. That’s not to say he won’t, I hope he will but squad capability shortfalls have been around even after Wenger handed over recruitment over to first Mslintat and then Sanlehi. If anything we worse off. Where we demurred in buying enough previously with Wenger and Law, we spent more (way more) with Mslintat and Sanlehi and still had capability gaps in… Read more »

How many goals and assists does Fekir have in Betis? Are his stats better than Pepe’s?

The fact that no-one commenting has managed to name a realistic target for centre back, central midfield or attacking midfield creator shows the dearth of available players who (a) want to move in Jan, (b) want to move to the PL, (c) want to move to Arsenal and (d) would improve the team short term and long term.

I think it’s totally sensible to wait another 4-5 months, plan for the summer window, work out who is being sold by us and expected income, and then spend accordingly.

Less of the scattergun approach to transfers would be most welcome.

Yeah, it’s sort of a frustrating reality, but maybe it could actually be for the best. This way, too, you can allow Arteta more time to evaluate the players in the squad to truly figure out what he has and where he really feels a need for improvement. (This, of course, presumes that Raul will actually be taking Arteta’s opinion into account regarding transfers–we can only hope.)