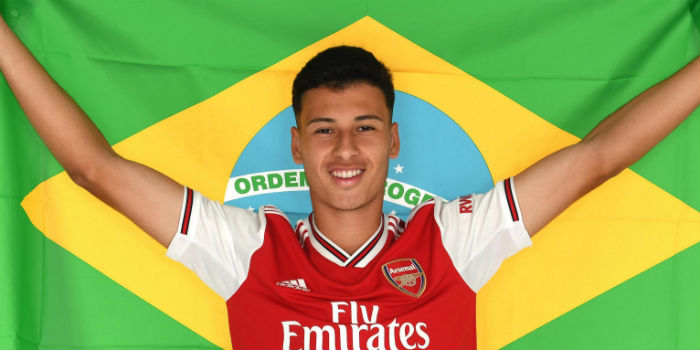 Mikel Arteta says Arsenal have not yet make a final decision on whether to release Gabriel Martinelli for the CONMEBOL Pre-Olympic Tournament in Colombia which runs from 18 January to 9 February.

Martinelli was selected to represent his country’s under-23s for the first time during the October Interlull and is wanted for the upcoming games. However, with the fixtures falling outside the usual international window, it’s thought the club are under no obligation to let him go.

Asked about the situation in his weekly press conference, Arteta said: “In the middle of the season it’s never ideal for players to go to that type of tournament.

“We’ll discuss with the club whether there’s an obligation, whether that’s something that the player really wants to go to and we’ll make a decision on that.”

On Tuesday, the Brazil Football Federation shared images of the under-23 squad in training. Martinelli was still in London having featured for the Gunners against Leeds United in the FA Cup 3rd round the night before.

We’d be surprised if he pushed to be involved this month. That said, he could be a doubt for the start of next season if his country qualifies for the Tokyo Olympics and he’s selected. The Games last from 24 July to 9 August.

Martinelli: When Mikel needs me, I’ll always be there

Keep him, great young player that we need!

Well at least we’ll have him after the Olympics rather than losing him for a pittance.

He had 1 year left

That’s an unnecessary distraction and he’s just coming out of injury and should be carefully managed to avoid further escalation of the injury or a new one. Bottomline is that we need him more in this second phase where every matters and every point crucial. That can not be overemphasized.

Too right. He’s an important asset for us. Fortunately Nelson looks to be finding his feet. Pepe still incredibly sporadic in output considering price paid and needs to be better still. So Nelson and Martinelli if they can continue to improve will be critical for rotation on the flanks along with Auba (Saka if need be too) I see good work rate from BOTH Nelson and Martinelli. Auba has also taken on instructions and improved in tracking back. Pepe not so much. If Pepe can work harder off ball, it will improve his on ball performance. Thus far, he has… Read more »

Pepe is the best player in the squad surprised he took do long 2 adapt as we had a fool of a coach who knew nothing about managing players. We now seeing a player ready 2 explode he will bring home the Europa Cup for us.

not just us but the senior brazil team in future tourneys

I get that there’s a general desire for him not to leave us for any portion of the season, but on the flip side, consider the impact of snubbing your first call-up. While the tournament is a distraction, it seems logical to think it’s a requirement to be named to the Olympic side, which would be tough to deny the player that opportunity.

Having Edu around will help in this situation, sure he can smooth things over with his former colleagues if he stays

Edu is certainly is a useful connection here and hope you’re right.

If he played for Arsenal U23, it would be a no brainer, but if we convince them that we need him for the first team in Jan / Feb, I hope there would be understanding for us and the player and no negative consequences for him in the future with his association.
And obviously enable him to go to the Olympics.

Martinelli when fit, is closer to starting than Saka, Nelson and probably even Pepe at the minute.

He started 3 PL games in a row before his injury, West Ham, City, Everton.

Will be interesting to see if Arteta throws him straight back in against Palace on Sat.

this craze with former players coming back to work with the club. I am sure if we had Vito Mannone around the club in some role, we wouldn’t be worried at all

I think Frimpong gets first dibs on that role

I say let him play in the tournament. He will gain confidence by regularly playing and scoring goals. So when he comes back he will be strong

I dont see his participation in the summer competition as being an obstacle necessarily to the start of next season. Most players are back at the beginning of July, he would be with us for 3 weeks, leave to play in the tournament and be back for the first / second week of the season having had the same break as everyone else and probably done the same amount of travelling as everyone else in the squad.