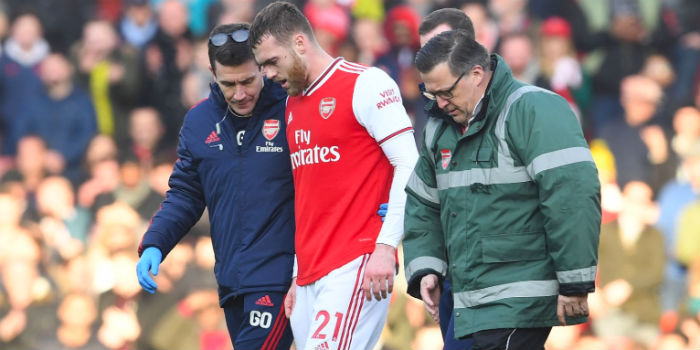 Mikel Arteta has confirmed that Calum Chambers has undergone surgery on what is thought to be an ACL injury.

The centre-back went down during the first half of the 2-1 defeat to Chelsea on Boxing Day and was sent for tests on Monday.

As feared, it appears to be a serious injury and he’ll likely miss the rest of the season. The loss of one of our centre-backs and doubts over the quality of some of the others could spark Arsenal into action now that the transfer window is open.

There has been talk of recalling summer signing William Saliba from his loan at St Etienne and RB Leipzig’s Dayot Upamecano, a reported summer target, is said to be back on our radar.

Asked about Chambers and his plans for the coming month, Arteta said: “We’re going to try to be in the market to see options that can strengthen the team.

“That’s for sure and that’s our obligation, and we’re going to be working on that. My obligation is to give my opinion on the things we can improve.

“Obviously we have some bad injuries, like Calum a few days ago. That’s obviously going to change our plans at the back, but the reality at the moment is that we’re not going to be able to do much.

“I’m more concerned at the moment about getting people back from injuries than I am the signings.

“I want to improve the players I here, get everybody on board and understanding what we’re trying to do. If something extra comes up and we think it’s the right opportunity to improve what we have, let’s do it.”

We wish Calum all the best with his recovery. If it’s confirmed that he’s suffered an ACL injury he’ll at least be able to lean on the experiences of Hector Bellerin and close pal Rob Holding who are both on the mend after suffering the same problem last season.

Whatever happens I really think we will finish top four this year. The players will be working their socks off. The manager will motivate to do their best. I land we as fans will roar them on. All round positivity guys COYg

It’s not going to be that easy.

There will be bumps along the way; fans really need to know and prepare for that. But then, we have to trust in the process and back the team to finish as high as they can. Get them to preseason early, strengthen sensibly with the players Arteta wants, and do some serious damage next season.

The reassuring difference here is that even the inevitable bumps we’ll run into won’t change my belief in Arteta – and this seems to be the feeling amongst the fans and the players. I genuinely have trust in the man and the process, for the first time in a long while.

Not having much luck with these knees. Not good.

On the bright side the players we already have aren’t looking too bad now.

I’d have thought I’d be shitting myself having to rely on Sokratis and Luiz a few months back, but such is the change that I’m actually okay with it. Do we have any idea when Holding is back?

Holding was about to come on against Manure mate.

Terrible luck. Similar to Rob, he was looking to begin to take his chance and then, bam, there goes the knee. Recover quickly, Calum!

That’s terribly unfortunate for Chambers. He had done his time on loan, as RB for us and finally earned his shot at his favoured CB and did better than the more experienced players there. Hope Holding and Bellerin make strong comebacks soon. We need them to help rotate and help with the push up the table.

Just as he was establishing himself as a starter at CB as well, really really unlucky. Hope he recovers quickly.

Kroenke needs to put his hand in his pocket.

Whoever we think is the best young defender we can sign? Just go out and get him, then just take a hit on Mustafi.

Athletico Madrid apparently want to sell Lemar, so they can sign a striker.

I love Lacazette’s energy and work ethic, but at 28, and earning big money……

Didn’t realise we had the option of bringing Saliba back early. Might be worth it given our current lack of depth at CB.

No one seems to be 100% sure if we have that option – there’s been speculation but as far as I can tell that’s all is. Think he’s also recovering from an injury of his own so it might not be an option we take even if we have it. After the past few performances I think it shows there’s more to come from this team – if we can strengthen that with what little funds we supposedly have that’d be great but if not Arteta is showing signs of making the best of the situation he is all we… Read more »

I would honestly prefer the young man to finish up his loan season in France and come back next season when we start from scratch again. The expectations placed on his young shoulders are already too much. And bringing him now would add so much pressure on him.

I mentioned some time back we may need to explore the potential of bringing in Saliba early. Caveat – he’s also not been heavily involved this season and has not had much senior competition under his belt last season either frankly. But we have paid 27m for him committed to 6 odd million per year potentially so we may as well pay whatever extra and get use of him now rather than as an existential asset to year end. At very least it will give Arteta more choice at Cback with Sokratis, Luiz, Holding (I expect we will move Mustafi… Read more »

Just a thought regarding injuries and our grass/synthetic pitch , it seems to me that when the players football boots studs dig into the surface of the pitch the foot doesn’t move , so if in a challenge the body weight goes the wrong direction the next thing that can move is the ankle or knee .
So is it the plastic weave/strands within the grass on the pitch which holds the foot steady not allowing it to slide when challenged so a bad ankle/knee injury can occur