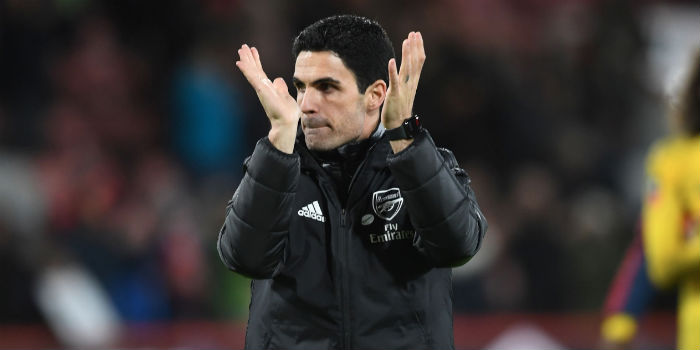 Mikel Arteta says he’s keen to taste success in the FA Cup as a coach having experienced it as a player.

The Spaniard played the full 120 minutes of the final against Hull City in 2014 as he captained the Gunners to a first trophy in nine years in 2014.

An injury meant he had to watch from the sidelines when we secured a second successive trophy a year later but he knows full well how enjoyable a trip to Wembley can be.

Speaking after his side secured safe passage to the competition’s last-16 with a 2-1 win over Bournemouth, the boss played up the importance of a cup run.

“It gives you a lift,” he told his post-game press conference.

“You go an extra round and look at the next opponent. You are closer to Wembley which is a magnificent day, let’s go step by step but they are really willing.

“I had that experience as a player, and I want to experience it as a manager now.”

On his side’s performance at the Vitality Stadium, he added: “I am very pleased. I knew it was going to be tough here.

“We played a really young squad today and I wanted to see the reaction. I’m very pleased because I saw a lot of things that I really liked.”

Arsenal are the most successful club in FA Cup history with 13 wins in total. Seven of those were secured during Arsene Wenger’s 22-year tenure. A tall order for Arteta to emulate.

Asked how he was finding life in the dugout compared to as a player, Arteta joked: “You sleep worse, for sure, before the games. It’s a completely different life you know.

“I’m pleased with today’s performance, but let’s go step by step and see where we get.”

I hate those who undermine this great trophy and competition. The OLDEST knockout competition in men’s football history and horrible clubs like Liverpool doing their best to reduce its significance. Imagine any other country where the national cup was undermined this much?

Fuck them, if nobody else wants it, Arsenal certainly do.

It’s too early, but…….. I am enjoying this run of ours and have always enjoyed the FA Cup.

Well I can’t say I’ve always enjoyed the FA cup but it certainly holds the key to my fused Arsenal existence. I don’t self identify as 78/79/80 for no reason.

I love this man

He needs it. League and CL qualification at the moment and “IF”. As much as many see improvements, we are yet to climb past 10th. Europa cup as well not a given by any means. It would not make ANY sense to simply dismiss FA cup (Granted League cup a complete waste of time) An FA cup win at very least will restore some belief in the club and make summer recruitment/retention slightly easier. BUT a 4th place finish will be better otherwise at minimum 5th or 6th in europa spots. It will likely not prevent loss of certain key… Read more »