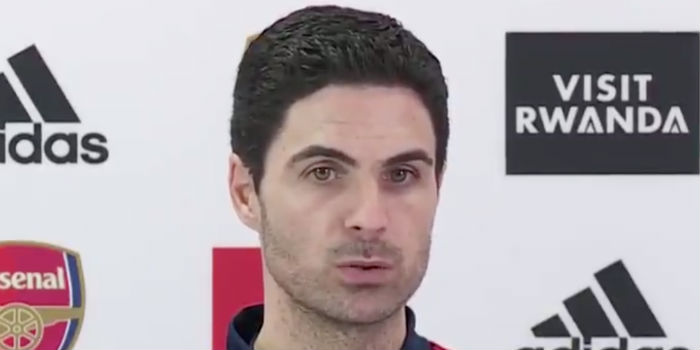 Mikel Arteta says the conditions were right to recruit Cedric Soares from Southampton and he’s backed the new boy to make an impact.

The boss has stressed throughout January that the club will only make purchases that improve the squad.

With that in mind, it’s a little surprising that we committed ourselves to the recruitment of a back-up right-back but Arteta seems pleased.

At his weekly press conference, he explained: “The player has big experience, he’s played in different countries, he’s played in this league. He know what it means. He’s been very willing to go to another top club.

“He has the desire and the commitment. I followed him a few seasons ago and I really like what he can bring.

“They were the right conditions for us to try and improve the squad.”

Earlier in the day, Edu said: “Cedric is a defender with good experience of the Premier League, and of course at international level.

“He is another strong addition to our defensive unit who will provide our squad with quality.

“I know he is a player who plays with absolute full commitment and energy. We are all looking forward to going into the last stages of the season with Cedric as part of the club.”

We’ll be curious to see how many games Cedric gets between now and the end of the season. It sounds like he’ll have to wait for a debut though due to an injury. We love signing injured players in January, don’t we?

“They were assessing him yesterday and we will have more results today, but he’s got a little issue,” confirmed Arteta.  “I don’t think he will be available to play [on Sunday].”

The sky is the limit with this lad. ﻿

I bet this guy is closer to the sky as much as kante is to the ground.

As it was for Debuchy or Andre Santos.

Possession, no cap. He can be better than Robertson, will be less exposed and pick less injuries in Mikels units and by nurture Mikel probably knows football more than Klopp. I agree with you

Looks like Arteta has some trick up his sleeve. I am expecting to see a lot of wing play.

Not necessarily a ‘back up’ if he looks better than Bellerin. But he’a got a month out injured anyway.

He can certainly tackle and puts serious whip on his crosses. Hector might have a job holding onto the starting spot.

One week ago, he was reported to be out for 3 weeks.
If that proves accurate, he could be available for the Newcastle match on February 16, which means he’ll miss one match for us (Burnley this weekend.)

Pablo Mari and Cedric are not exciting signings but they are effective signings for a team that is short on the defensive side. Fingers are crossed but I am optimistic that with good tactics and attitude, it will turn out well. I am predicting that both players will become permanent signings because they will surprise us. If Pablo Mari achieved what he achieved in Flamengo, we might have stolen one from the football market. COYG!

Samu
Reply to  Me from Here

Out for a couple of weeks so there is no comparison

He spoke in length but revealed very little about how he will use him.

Yup.
MA, not only is he the handsomest manager, he’s also the Wengerian gift of saying much while revealing little. And that is for the best.
Big timer.

Unai Emery: am I a joke to you?

Surely there is some sort of permanent guarantee or something (beyond the summer) along with this deal otherwise it’s very suspect. Close to a month out (knee ligament damage…yikes), going to then take a while to bed into the a squad so really 1.5-2 months before he might be bringing something to the team and that takes us to mid-march (maybe later) 6 weeks of the season left. If there is an agreement beyond the season this makes sense, if not it’s really bizarre

Apparently we have first option on him when he becomes a free agent in the summer, crafty Arteta

Classic Arsenal to cover a player recovering from injury with an injured player!

pretty sure he is a free agent in the summer, may have a bearing

He’s out of contract at the end of the season.

From mid march and on then. So the season now ends in late april?
Did I miss something?
Anyway, I think he will be available in a couple of weeks already.

Cheap cover in an area of need for the second half of the season, how bizarre

He will be available after winter break, so he’s only going to miss trip to Burnley.

He could turn out to be a real good
signing

Looks like we will push Saka back to his wing role.

Pepe has been unconvincing so it will mean we have options as well on the right with Nelson back but also potentially ability to switch Martinelli right.

Kolasinac hopefully returns otherwise Cedric will deputise for him with Tierney out.

Oh look – Santa’s reminded us that Pepe is ‘disappointing’ (again!). And in a forum about completely different players (again!)

He’s a right back why are you talking about all of our left backs?

Would Cedric bring the goblet of fire?

On topic tho, he seems like a good deal to me, not too expensive, knows the league, and we will be in pole position to sign him permanently if he works for us, and if he doesn’t, we could just not sign him at all. He also offers cover for all the back four, which is only a good thing in my view.

A team wanting to challenge for every trophy must, really must have quality competition for starting places in all positions. We’re on the right path.

A certain resemblence to Hector maybe? His Portuguese 2nd cousin or
something? Both sympathetic dudes..Come on lads..

Good thing its only a loan.

The other issue on the right side is productivity. LWing has been for a long while now where most of our threat come in from. From Alexis previously to Kolasinac, Auba now, and Martineli/Saka, it is disproportionately where all the chances are created off. For some time, we have been unbalanced. And it has made us somewhat predictable in attack to defend against. Shut our left down and the threat from us is easily negated…side to side passing. This has not been helped in recent years with Bellerin injury issues. Which is why last summer there was a chance to… Read more »

I get this deal is confusing to a lot of people especially since he is out for a few weeks already. However, I think Arteta has good reason have a decent backup FB. The fitness of the current fullbacks are not reliable. Tierney probably won’t be at full capacity this season. Kolasinac seems to need some rest to heal his muscle problems and injury properly. As good as Saka is in the leftback he is only 18 can’t play that many matches full 90. Plus a single big mistake can destroy his confidence.