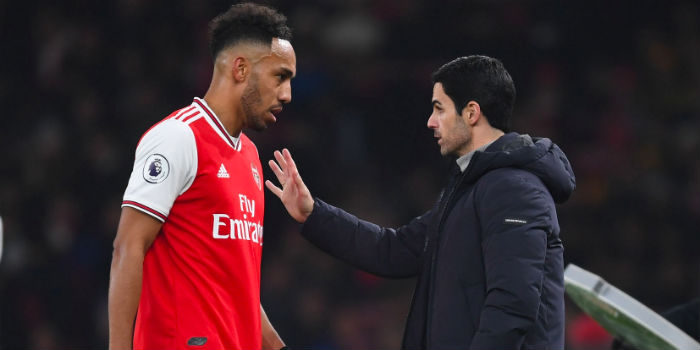 Mikel Arteta says he wants Arsenal captain Pierre-Emerick Aubameyang to stay at the club this season despite rumours linking him with a move to Spain and Italy.

Real Madrid and Inter Milan are said to have been sniffing around the Gabon international who has 18 months left on his current contract.

With negotiations on a new deal stalling, it’s more than possible that we could cash in on the striker in the summer, however, for the sake of club stability, it looks like we’ll fend off any approaches this month.

Facing the press ahead of Arsenal’s FA Cup third round game with Leeds United, Arteta was asked about the situation.

He replied bluntly: “I do not even want to think about that possibility, I want him to stay here.”

Aubameyang has scored 15 goals in 25 appearances this season and has a total of 56 goals in 90 appearances for Arsenal since signing from Borussia Dortmund two years ago.

For the moment, he seems happy enough. After yesterday’s win over Manchester United he told RMC Sport: “The English press likes to talk a lot. For now, I’m here. I’m 100 per cent here.”

Just hope he can get the various players to stick with him.

Trouble is that moves are already being made to attract players away.

We’re in a tough spot in that we’re going to have a very tough time replacing players in January so it appears the plan is to just hang onto to everyone until summer and hopefully add a defender now given the injury crisis. The squad is looking like a team under Arteta and as a result there is a lot of deserved positivity. However this squad is likely to see a lot of turnover this summer as we target players who want to fit the way we want to play. Hopefully we have enough to make a real run at… Read more »

We need to hold on to Auba thru the end of the season. But if we get a massive offer for him at that point then maybe we should take it considering his age. Or
Maybe not? This is a tough one.

You can make an argument either way. If you sell him, you would have to bring in another experienced striker (Eddie not ready yet for the starter role) and the club fee we would have to pay you could justify putting a lessor amount into wages a la Kola, to keep Auba for another 3 years. I’d be happy either way, just make decisions and move on to the next.

The media hates us, they thrive off the negative and in Arsenals light at the end of the tunnel they cant sit idly by….scumbags

He replied bluntly: “I do not even want to think about that possibility, I want him to stay here.”

Definitely media stirring but arsenal news sells that’s a fact so they will spread or create anything they can.

Watched Upamecano for little I have seen of him he’s like a Sol x Kolo love child.
Raw power and pace.

Ake is classy but too much of Luiz mould perhaps.

I simply can’t see him sign a new contract when he’s can pick from the top shelf. So either sell him and reinvest or let him bang goals in for us until the end of his contract.

At his age, I do not think teams like Real will give him a contract that is longer that two years. We may keep him with a well-framed contract of three or 3 1/2 years. Knowing that he squandered lot of money on cars, we have to accept he needs the last big pay to prepare for his retirement from football.

He’s a speed guy into his early 30s. We need to learn from the Ozil mess and cash in a little too early rather than too late.

Come on lets not start that. Lets behind Arsenal football club COYG

Having discussions about the squad doesn’t mean we don’t support Arsenal. If management doesn’t learn from past mistakes it will just keep repeating them

Why the thumbs down? It was what arsenal use to do during the early Wenger years.

I feel like he is the kind of player who, if he joins a team like Real Madrid, will play a few games, not do much and be relegated to the bench to regret his decisions.

Too many Arsenal players have had big moves bite them in the ass. I feel like his would be another.

We can all see you’re here 100% right now Auba, but what about next year?

I’m a massive Auba fan and this made me chuckle.

(Though I doubt many here remember such things, or just choose not to.)

It would be a real shame but I would not begrudge Auba if he wants to leave this summer for a final big contract on the Continent before he goes to the MLS or China retirement home. He’s performed everything asked for the club and we’d be relegation fodder if not for his goals this season.

Buy Ceballos, sell Ozil to a club in Qatar. The build-up to the world cup will help sell him. Take the extra money to offer a big contract to Auba.

I take it you missed the last 3 matches!?! … Oh, and the bit where Ceballos flopped and got crocked!!!

Honestly I think we will at least get six in the league and win Europa – the latter will get us CL football and help convince Auba to stay put and help us wrestle with the big guns again!!! COYG

I don’t want to see him go, but he is probably our most valuable asset and we should make sure that it is not squandered like with Ramsey and Sanchez.

Personally don’t think selling Aubameyang in the summer would be the end of the world, especially for a huge fee. In truth we haven’t found a way to play him and Lacazette together and to the best of their abilities at the same time. Auba is slightly miscast on the left, deeper and wider than where he’s most effective. Add in his age and I don’t think it’ll be impossible to find a better wide left option.

I agree that it won’t be the end of the world if we sold him. But the broader issue here is that good players want at least the chance of winner major trophies. The task for Arteta is to convince them that while we are not there yet, his project will soon see the team challenging for top honours.

I get that, we want a situation where Aubameyang doesn’t even think he has to leave here to win big trophies. But I also see what Liverpool did with Coutinho, selling one of their best players for the short and long term benefit of the team. We won’t get as much for Auba as they did for Coutinho but the principle is the same. Not only did selling him allow them to upgrade their spine, it also solved a structural problem in their team, namely how to accommodate all of those attackers and stay defensively solid. It allowed them to… Read more »

The problem is he will only have a year left on the contract. There will be no huge fee in the summer.

With his goal scoring record and the teams rumored to be interested, a fee of at least 50m gbp seems pretty doable – Wenger turned down 60m for Sanchez in a similar situation. 50m would get is a couple of young promising players if we’re smart about it

Maybe he didn’t want one? Wanted to have options left open

This is a tough one. I’m sure Arsenal do not want another Ramsey situation where Auba could leave on a free transfer in 18 months. If we sell this month, we’ll get the greatest return, maybe £30 – £40m? If we sell in the summer probably £20m+. Or we could just keep him for the rest of this season and all of next season letting him bang as many goals for the Red & White as possible, but we would get no money to reinvest. He may re-sign in those 18 months as well though. But those are essentially the… Read more »

If we were offered stupid money for him then we should let him go – but only in the summer. His goals have kept us out of the relegation zone this season. I don’t blame Auba for wanting to go: he’s 30 and there’s no realistic prospect of the club challenging for major honours any time soon. If a big Spanish club want him and are prepared to hand him a massive contract then it’s a no-brainer that he should go for it. The problem will be in finding a top striker as a replacement – especially as our owner… Read more »

Kronkbastard being reportedly 1 billion in debt could perhaps be good news for Arsenal. Let’s hope it forces him to sell to someone with a genuine taste for trophies.

Lol we are 3 points off 6th with a new coach that actually has the team clicking. Relax mate

I think Mikel has found a way to blend all the current players together.

Going to be hard to keep him if there is a team still in the champions league wanting him.

This is going to be an issue regardless IMO even if we were not in such dire circumstances. We have 2 senior strikers. Auba is 30+ and Laca not far. one likely will be in danger of being poached considering our recent failings. Even if we snuck into Cl this season, I don’t think it may be enough to convince them. I suspect had we not gotten the win against United, confidence and goodwill to Arteta would start to evaporate very quickly. At the moment, its likely a wait and see. We are 4 points off of United and then… Read more »

Whoever has the fans has the power at the club. Right now, Arteta has the fans so I expect him to be able to negotiate the halls of power with us in his pocket to bring the players in he needs for his system. The change has just begun, and Arteta is the right man at the right time.