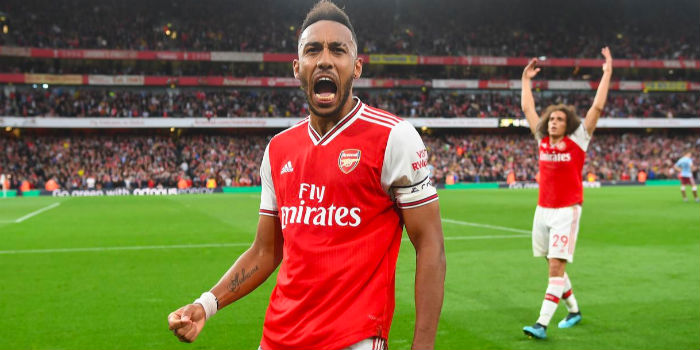 The likelihood of Pierre-Emerick Aubameyang leaving Arsenal in January has been well and truly put to bed over the last week after the captain’s assertions that transfer rumours ‘do his head in’.

The striker is a key player for the Gunners, a team not blessed with a variety of goalscorers right now, so his importance is obvious.

His longer-term future is less clear though, as this summer he’ll have just 12 months left on his contract – leaving the club with a big decision to make. Do they cash in? Can they offer a player over 30 big wages and a longer deal? We surely can’t just let him leave on a free.

Nevertheless, Mikel Arteta seems keen to keep the Gabon international, very simply stating we have better chances of winning games if he remains in red and white.

Speaking ahead of our trip to Crystal Palace on Saturday, the manager said, “I was very pleased to read those comments. He knows exactly what I think about him and obviously he’s a massive player for us.

“But at the moment we’re in the middle of the season and we haven’t discussed anything further on that at the club.

“My intention is to keep Auba obviously because I know that if we keep him with us, we’re going to be stronger and closer to winning football matches. That’s the only thing.”

Pressed on how confident he was this would happen, he continued, “I don’t know, we haven’t discussed that.

“But I’m confident that he’s very happy here because that’s what he said in the media.”

I hate to say it but Aubameyang deserves champions league football and belongs at that standard. If we miss out I won’t begrudge him having one last roll of the dice next season. Here’s hoping he plays at that level with us.

I’m not sure he deserves it that much, barely showed up in the europa final.

When your only service is a ball into feet with your back to goal every 30 mins, it’s hard to make a real statement of intent.

Auba would score goals for literally any club in the world. It’s a bit of a tragedy he never played at Madrid or Barca. He would’ve been epic.

I’d think it’s a triumph of good over evil that he never played for either of those bastard clubs.

What are you smoking over there, Samgunz?

Messi barely shows up in worldcup games with Argentina.

Not true at all. When Argentina reached the World Cup Final in 2014, Messi was voted player of the tournament. He is also the all time top scorer for his country

No one did. But as a striker whose game is based on movement and quality service, and seeing as he (and Laca and Ramsey) were essential in even getting us that far, he can at least be excused.

I’m sure you blamed ozil’s body language and anything but emery for arsenal losing to Chelsea last season’s finals eh?

I would like to see him scoring goals for us next season as well, especially now with Arteta in charge. When you look at what Vardy does still at 32, but I agree that financially it could be a tricky situation.

How weird would it have been if we’d signed him back in 2016? Probably wouldn’t have Lacazette. Maybe not even Auba. Still can’t work out if we or him dodged the bullet there. I’m leaning towards him…!

I love Auba more even as a character – the positivity that he always transmits to everyone around him and how he always smiles.

I love the way he makes me feel about myself.

https://www.youtube.com/watch?v=lADzp3ji1ro That made me smile recently :d

According to the Metro we have submitted an offer to take Cavani from PSG
You couldn’t make it up… but they did!

Pepe is here
Reply to  Onenil

You would think that it’s law to have a report linking us Cavani every single transfer window. I swear we’ve been linked with him for years!

“We surely can’t just let him leave on a free.”

I know that there are risks involved in giving any player in his 30’s a big new contract, but Aubameyang is worth it imo.

More likely we were sell bc if player does not want to stay, it won’t happen.

And frankly, Auba has given a go but if we are playing europa or worse next season, it won’t be worth it for him to stay particularly if other more attractive clubs are willing to pay a higher salary in the twilight of his career.

Cash in and move on.

This guy is a first rate poacher, so even when he slows down he will still be dangerous around the box. We all like him, MA likes him, and he seems like he might want to stay given a decent contract. All that being said but knowing KSE, they will probably not want to pay him much more than what he is on now. Anybody have a spare kidney?

Martinelli will be pushed to step up if he leaves. Maybe Nketiah will be further assessed following potential loan spell to end of season.

Otherwise also likely to add from market but either a bargain or someone older likely a Cavanni as insurance for a season or so.

We have to clear 99m for non existent (this season) Saliba and erratic Pepe over next 5 summers plus address other areas without (likely) CL competition as bait.

Agree with HH. Yes Abu shd have chances to shine in the cl but has been
repeatedly let down by a porous defence.
Of course no one is indispensable.I f Arsenal do cash in on him they shd use
the funds to get a top quality defender,and not go for a bargain.

He hasn’t been entirely blameless either.

He scores a bunch but also conspires to miss sitters particularly when we need to establish some control on a game.

Plus until recently, he did not show for the ball as well and did not do enough tracking back (which has corresponding effects for us in defense and midfield). Also he is still non-competitive for the high balls albeit he is slightly better retaining the ball now but just.

I mean, we will likely be able to keep him till the summer but thereafter…its anyone’s guess. If we don’t sneak into CL and trophiless, another Europa season and an FA cup may not be enough for him. We will be (easy) prey to bigger clubs. Probably try and promote Martinelli up top, hope to keep Lacazette another season and add maybe someone from market. There was talk of maybe Cavanni if so likely for a season or two stop gap measure considering age. …not the worse scenario but certainly won’t make it easier with other gaps to fill and… Read more »

Yes keeping Abu will make Arsenal stronger.
I read with a Brazilian wonder kid who is 168 or 5ft 5/6 inches tall.
The EPL English Physical league is very tough and is no place for shorties.
Hopefully Arteta will get some imposing giant defenders

Tell that to aguero, santi, kante, hazard or arshavin.

We aren’t. Auba’s contract runs until the end of next season, which is why a decision needs to be made this summer.

Raul’s stated aim is to avoid anyone entering the final year of their contract to still be with the club. So, either he signs a new contract, or we sell him prior to the start of next season.