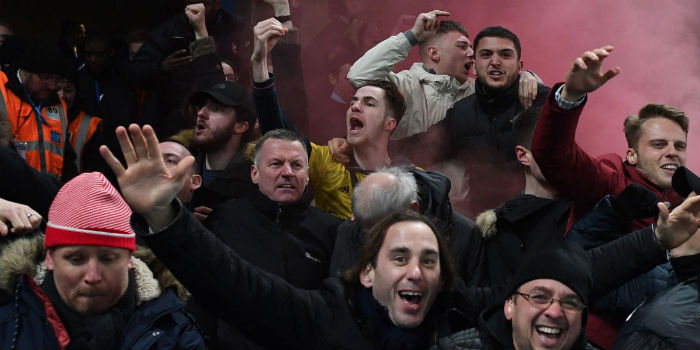 Mikel Arteta says he was overwhelmed by the support of Arsenal’s travelling fans during the 2-2 draw with Chelsea on Tuesday.

The Gooner contingent were loud and proud in their encouragement of the players throughout the 90 minutes playing a key role in inspiring the ten men to a battling point against the odds.

After the game, the club’s in-house photographers shared incredible pictures of the away end as supporters celebrated goals by Gabriel Martinelli and Hector Bellerin.

On his return to the club, Arteta said that it was important to restore the connection between the fans and the players and he thinks he’s made progress since December.

“When I was asked about the things that we’ve done in this month, I think that one of the important things is creating that connection again with the fans,” he told his weekly press conference.

“It’s a long time ago and these people have been here for a long time that we haven’t seen the fans react and support the team how they did against Chelsea.

“It was incredible and in some stages it was like we were playing at home.

“The amount of support they gave was incredible in difficult circumstances and I’m so proud that they’re feeling a little bit closer to the team now.”

It’s going to take a little longer to replicate the Stamford Bridge scenes at the Emirates, but a run of wins in the final stretch of this disappointing season would certainly go some way to restoring confidence and matchday enthusiasm.

Massive respect to our away fans.

T.A.
Reply to  A Gorilla

Absolutely. More important than who happens to own the club or the manager’s tactics or even whether Mustafi considers a back-pass in the dying moments of a match. Supporters are the life of a club.

Ordnance Dave
Reply to  A Gorilla

Our away support is a ravenous bunch of passionate kings.

I love that picture above. Particularly the young lad in the centre wearing the away kit top. Hilarious !

…that is exactly what my celebration would be if I was there !

They’ve been good lately but only because there is an out of proportion feeling that (for now) Arteta is some sort of messianic figure.

If results don’t start to pick up, we may have same toxic shit again.

But a welcome change and good to see them in full voice.

The Unai Bomber
Reply to  Santori

Do you always try to be an objectionable knob Santorum or does it come without effort. I was at Stamford Bridge and am proud to positively support our club home and away.

It’s optimism. You don’t need to believe that Arteta is the messiah to appreciate the change in effort and application which is visible in every game.

People will support a poor team which tries hard, the toxic atmosphere was because they will not tolerate a poor team which doesn’t try hard enough, run by a poor manager and execs who weren’t doing anything about it.

Link to these photographs would be appreciated

I watched the match on my way home from work on a bus full of depressed Palace fans. The support was 10/10. I watched the Arteta cam or whatever it’s called today, on my way to work and, I swear a tear came to my eye when Martinelli did his boss celebration in front of the fans. I would have loved to be there. My moment of the season.