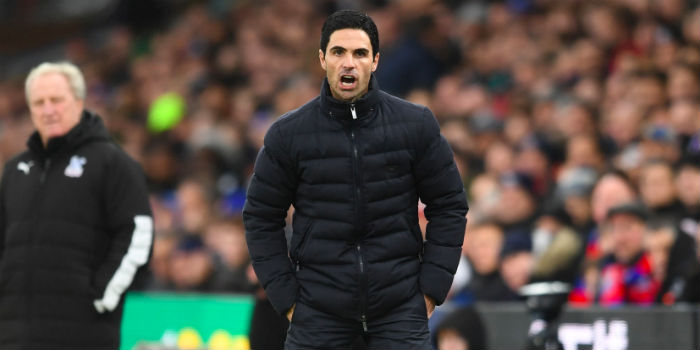 Mikel Arteta says Arsenal paid the price for giving away too many free kicks in dangerous areas against Crystal Palace but maintains that his players will learn to better manage games.

Roy Hodgson’s side took advantage of lax defending by the Gunners for their equaliser in Saturday’s 1-1 draw, working the ball to the right flank for a cross when the visitors had expected a ball to be lofted directly into the box.

That we made 22 fouls on the Eagles across the 90 minutes is something that Arteta thinks we need to work on, especially as so many were in areas that allowed the home side to send men forward.

For all that, the boss was pleased with the effort of his players to close down opponents quickly.

“I asked them to go 100 miles per hour to chase the ball, to be very aggressive when we didn’t have it, to win it back as quickly as possible and they tried to do that,” he told Arsenal.com.

“We need to know that there are certain areas we can do it. Against these kinds of teams, it’s dangerous because they bring the two centre backs up [at set pieces]. They put the ball in the box and you have to defend.

“Their goal was a consequence of a sequence of a number of things that happened afterwards. We have to know to play these situations a little bit better. In terms of effort and spirit that they showed – it was top.

“It’s game management, it’s game moments, and we’ll get better at it.

“We need to know that at this type of ground, that we don’t want to put ourselves on the back foot in set-piece situations because they are really good and work a lot on it.”

On the subject of discipline, there were a couple of erroneous reports that claimed that Alex Lacazette’s fifth booking of the season, picked up at Selhurst Park, would earn him a ban. That’s not true, the threshold for a suspension was raised to ten bookings on match-week 20.

Here’s how we look on the yellow card front.

GOod news on Laca, we need him (and Pepe) with Auba out.

Also I like the intelligence of Arteta’s approach, we heard little from Emery of this (or perhaps we and the players just didn’t understand what he was saying). Good move forward by Mikel.

Didnt AMN get a red card against Aston Villa?

He was sent off after getting two yellows.
But I think the list above shows on how many yellows the players are on their way to a suspension for receiving too many yellows throughout the season. AMN received 3 yellows rather recently against Bournemouth, Chelsea and Palace. The two yellows against Villa don’t count toward that, because he already served a ban for that, he missed our EFL cup game against Nottingham Forest.

So what are you trying to say ?

I know everybody has to defend blablabla, but Laca has to stop defending as if he were a real defender because he is not. Unable to do cynical fouls, provoking FK and getting yellow cards… I wouldn’t trust Luiz or Sokratis to goal and so let’s stop trusting Laca to defend: as a striker he simply has never had the training to do that.

Ridiculous. This has been an Arsenal issue for so long. Attackers switching off on defense (even the bloody midfield doing so). Laca’s defensive contributions are literally all that is keeping him on the pitch at the moment given his poor form in front of goal. I love Laca’s workrate and we need it more from others. If we could get consistent concerted team pressing out of this squad (like what we saw against United) we’d be a far better team. If it costs the odd yellow then so be it. Now could Arteta pull off the impossible and get Ozil… Read more »

I can’t stand Ozil, I think he’s lazy, and his attitude stinks. But in 2017, I knew our name was on the FA cup, when Ozil went in with a clean crunching tackle on Eden Hazard just before half time, it was a real collectors item, and an absolute thing of beauty. Hopefully over the next few weeks, Luis smashes one in from 40 yards Things start clicking into place for Pepe Martinelli adequately replaces Aubameyang through suspension Matty hits a 35 yard rocket with his left, straight in the top bin. Arteta starts dishing out good ebening’s, just for… Read more »

He is never going to go full Sokratis, or god help us Xhaka… but Ozil is for the first time out in years making a real effort to press and tackle.

I’ll give you press, tackle…hmmm nah. When he wants to (and lately he has wanted to more) his defensive positioning is actually good. But he still avoids the physical stuff like the plague even when he’s engaged. That costs us. If he got stuck in we’d get a lot more opportunity to break up their play and turn defense into attack. He is in the crucial part of the pitch for doing exactly that.

Yes, he will only go for a steal when he is behind a player. Don’t know how many times it looks like he could just swipe a foot in and nick the ball away. He seems to have something about his feet like a concert pianist has with their hands!

Yeah he has been good recently, but on Saturday unfortunately any time he breathed on one of their players they would fall to the ground and the ref would blow up

Granit must’ve conjured some strong magics to stay off that booking list ?

Good to know someone else thinks Xhaka is actually a witch, conjurer of strong magics. His powers are waxing too, now has to ability to control the mind of officials, unfortunately only against himself…for now! Once he manages to completely control them and bend them in our favour I promise I’ll be 100% on board the Xhaka-train. Well actually I don’t think I’ll be the determinant in that by then anyway as Xhaka will have also developed complete control over fan’s minds too.

Hmmm…got a little carried away there didn’t I!

Arteta is not only a clever but a calm manager who looks and decide things in the best interest of the team. Many supporters, including me wished a quick solution after the Hertha link and agent talk on Xhaka and send the midfielder packing… Instead of this emotionally motivated decision, Arteta reintegrated Xhaka to the team. He uses our resources quiet well.

Well, even we committed FK’s on the halfway line they’d send up their two FB’s, so it’s kind of difficult to avoid that situation. I think we dealt with their crosses and FK’s well throughout the game bar that one moment where we didn’t. Guess that kind of sums us up this season.

But I’m loving how much more aggressive we are under Arteta! The apathy towards the end of the Emery era was just horrible to watch.

Agree 100% and its the complete opposite of what we got from Emery.
Only thing i like to mention is the bit about set-pieces and how they’re very good at it because they practice a lot. Why does it appear as if its only the smaller/midtable teams that practice (a lot more) on it? It just comes across to me that we don’t really do that and it’s proven to be a very good weapon to have in the Arsenal.
But of course I might be wrong.

We have scored more goals from set pieces than any other team in the Premier League and Arteta practices them a lot.

Ok. I was wrong.
And to think I posted that having only recently read that we scored most from set-pieces. Also, i remember being schocked at the very fact haha so yeah my bad.

The first goal conceded against Chelsea was also a result of a dumb freekick given away by Laca. Their player was going nowhere and he needlessly went into the back of him. We need to cut that stuff out.

Thank god Mkhitaryan has only 1 booking!

I’m not even sure if its solely due to a sequence of events more so when we came out for second half (without Torreira), we should have expected a response from them but we failed to match them. This isn’t our first game of two halves. Nor was the old owl employing anything different second half for Palace. Sure Kolasinac could have got closer to his man, maybe we could have been a step closer on the block but really all our problems stemmed from start of second half. They were winning the 50-50s and some of our players were… Read more »

Glad to see Pepe has 3 bookings already!
Has to stand up for himself against bullies, cause the refs are shite.

A bit more informative than “we are trying to get back to our way”. Listening to an Arteta press conference is actually interesting.

Arteta speaks the truth! I have a lot of hope now that I’m hearing him speaking out on issues that Wenger didn’t. Let’s just forget Emery’s post-match guff. But how much can you coach game management?