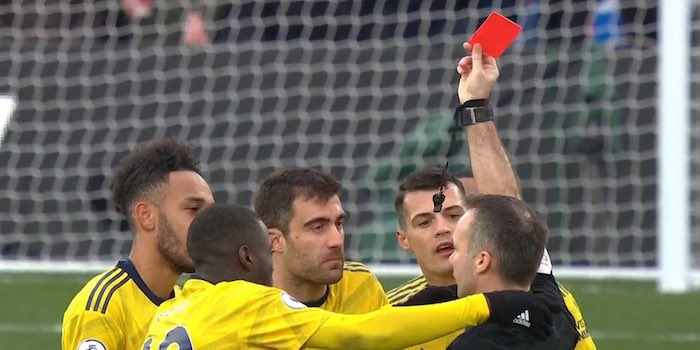 The reliance we have on Pierre-Emerick Aubameyang to score goals for us is obvious. The striker has 16 goals in all competitions this season, putting him far ahead of the next best, Gabriel Martinelli, who has 8.

Alexandre Lacazette is having a difficult time in front of goal, and has scored just 6 times this season, while Nicolas Pepe comes next on 5.

It’s a worry, and one that has been exacerbated by the skipper’s red card against Crystal Palace on Saturday – which means he’ll miss three games.

It’s a problem for Mikel Arteta, but he has challenged his players to take responsibility while Auba is suspended.

“Losing probably the most important player is never nice,” he said.

“We have other players that can play in that position. We will try to find a way and be as competitive as possible.

“They now have to make a step forward now he is not able to contribute to the team with goals.

“Someone else has to do it and I want to see that reaction too.”

I think Laca will step up.

You can see he has a moment of hesitation when he gets in the box because he feels he should look for the good-to-great pass. Then the next opportunity, it looks like he rushes the shot.

He’s a great striker, he’s due a run.

I think i know where Laca’s been shooting at. A good time for Gabi to stake a claim. This could all just turn out a huge positive for us.

The BBC do a ‘Team of the Week’, allowing us to choose the best players of the week. See https://www.bbc.co.uk/sport/football/51079426

Before clicking the link I wanted to ask you who from Arsenal you would have chosen to be in contention for a team of the week, as I didn’t see any really special performance on Saturday, but then I looked at the site and saw that they have plenty of Palace players to choose from, which in my opinion makes this whole thing a joke. I didn’t see many other PL games this weekend, so there might as well have been many better player performances in those games compared to our players, but Palace players were for sure not better… Read more »

That’s the point, we are doing better as a team under Arteta than as individuals. Hope that continues (though it would be nice to have some top individual performances too).

AMN put Zaha in his pocket. A fine performance.
How he was overlooked? Says more about the survey– than AMN.

but Garth is a spud

Yup. He and everything he writes/says is a dumpster fire.

With Gabi, Laca and Nico we’ll be fine. What is required is for our defence and midfield players to stay switched on for 95 minutes every match.

Indeed. I’m more worried about any injury to torreira than the suspension of Auba… cue a run of three 0-0 draws…

To be fair if we were scoring 3 or 4 goals during periods of dominance we’d be winning more games. All of them in fact.

Also there is the psychological effect of going 3 or 4 down. Other teams will give up.

I disagree and think it’s our attackers that need to be switched on. Since Arteta’s come in we have improved defensively but our attack is still bitterly disappointing. We’ve only managed to score more than one goal in 5 of the last 15 Premier League matches – it’s not good enough and I’m not sure how much longer we can excuse Lacazette’s poor run in front of goal. I’d be tempted to try Martinelli up top

Totally agree and I’m really not concerned that Auba is out. I think we’ll function better for longer periods without him rather than rely on his momentary impact. Martinelli is young but when I watch his game I see someone who is more secure on the ball. Is more intelligent in his decision making and his execution of passes is way better. He can dribble out of tight areas. He’s super quick and works incredibly hard defensively. Calm in front of goal and shoots accurately from distance. It’s hard to leave Auba out and he’s a proven quantity both in… Read more »

Lacazette has given some very physical performances lately. Also credit him with the second of two sublime passes to put Auba through on goal yesterday.

Laca will give as much as he gets from the physical CBs we’ve played lately. We don’t have anyone else like him– who are willing to mix it up– and come out on top. He’s actually been somewhat of an enforcer up front.

Ok, we need to strengthen the defence, however that more to do with tactics than change of personnel. We need to concentrate on getting the 2nd goal. V Chelsea, didn’t, we lost. V Manure we did, we won. V Palace, we didn’t we drew. We should not underestimate how much the 2nd goal affects the opposiition. They demoralised. They need to change tactics. If we 2 up we have a extremely good chance of winning. At 1 up … !

Spot on. We’re still playing scared so often when we get a lead. That second half against Chelsea was terrible. We went from a team that looked like a dominant European team that we should back to the meek set of scared, soft boys that we are. Same again against Palace who were bloody terrible in the first half, but we couldn’t get a second and went back to scared mode.

Is it just tactics though? I don’t think the players we have could play like, say, Liverpool, regardless of tactics. We don’t have the pace at the back or the legs in midfield. Tactics can improve us, but their effect will be limited to the players we have.

Martinelli playing wide in could be a blessing in disguise. As well as Auba has been playing there it’s not his best position.

Great opportunity for Martinelli to get game time.

I’m convinced Laca will step up and that Arteta will set up tactically to benefit him as a striker.

But I’d love to see him alongside Martinelli because we can’t rely on a single goal threat.

The worry is the lack of goals from midfield, apparent since departure of Ramsey really. Cause is players not confident enough to take shots instead of a pass on occasions.

Mind you, general lack of anyone getting a shot in is a concern. I think Martinelli will step into Auba role quite well.

Not enough goals coming from midfield though, Ozil isn’t a scorer, neither is Torreira, Guendouzi or Xhaka which is worrying. Didn’t we used to have a guy who scored goals from midfield? Oh yeh we let him go for free that’s right.

No serious team builds around a player like Aaron.
He simply can’t stay fit.
Always gets injured, usually when he hits form.

No serious team builds a team around one player (unless it’s Messi/Ronaldo and even then it’s questionable). Ramsey’s injury problems probably had a lot to do with our over reliance on him though, rushing him back when he wasn’t quite ready. It’s a squad game and at a team like City or Liverpool he’d be in a regular rotation.

And the point still stands that we’ve let him go for free, losing out on the funds that could have helped get a replacement. Good thing we’ve learned our lesson and stopped our top players running down their contracts…..

It wasn’t the injuries so much as the length of time after one that it took him to get back to his best. You can’t rely on a player who’s going to play like a spavined moose for a season after every knock.

Then takes a while to find form again. A shame.

I almost forget that ozil is someone who can contribute to scoring but in reality all he has to do is have a mind to get into goal scoring positions regularly. Pick the moment but at least have ambition to score. Opportunities should arise to be running into the box 3 or 4 times each game from that position. It’s not easy nowadays to work a ‘number 10’ into a well functioning side but defensively it now seems to be working. However i still think that to play there you need to significantly impact the game by absolutely dictating the… Read more »

Arteta needs a couple of transfers windows because I’m not convinced he can improve us much beyond the limitations of this team. We could only draw with Bournemouth and lowly Watford went there and blew them away. I think we still need to overhaul most of this team. I was pretty unimpressed with us at Palace, at 1-0 we should have hammered them, but we resorted to slowing it, being cautious and lacking ambition.

Agreed. We’re playing better but we’re ultimately limited by the players we have. I’m sure Arteta realises this, I’m just not sure the people above him do.

A lot of talk on here about Ramsey and that underlines how stupid it was to let him go for free. It also shows how crazy it is that he was able to score and create from deep, most CMs like him would play in a 3 or be the 10, not in a holding two. Cant think of another player in the prem that plays like that, which shows how hard he’d be to replace. If we can’t get a like for like the emphasis has to change, and that means more onus on getting goals from 10. Ozil… Read more »

It would’ve been far more stupid to pay the wages to a guy who plays so little football every season amd can’t be relied on. Not his fault but that’s reality. Building a team on players who are injury prone is something as a fan base we criticised for years

Ramsey is injury prone for sure but he still managed to rack up 40 appearances last season, even though Emery was reluctant to use him at first. For reference, that’s more than Ozil made in each of his last two seasons. In fact Ramsey hasn’t dropped below 30 appearances since 2010-11 and we all remember what happened back then. So we’re not talking Wilshere/Diaby levels and for his quality, you would definitely have him in the team, maybe in rotation with other midfielders.

The Voice of the Noise
Reply to  Alex

Might be to motivate the other players to step up and “be the best”. But you can’t really argue with the fact that, without Auba, we’re not as much as a threat – at least on paper. Let’s hope Arteta will work his magic and the other players will start getting more goals to their name.

tanned arse
Reply to  The Voice of the Noise

“Losing PROBABLY the most important player is never nice,”

It’s no coincidence he said probably. It’s an excellent choice of word and he’s 100 percent right!

I hope mustafi scores loads of goals in the opposition box?

I think we are missing something in midfield!!! Don’t get me wrong, I am enjoying the performances of Ozil and Xhaka but just feel like these guys need to chip in with goals – so getting such players in the summer would be great, perhaps even get one in January, would be a great and welcome surprise

I think Martinelli has goals in him. he’s look bright and enterprising. Would back him to start on the left. Laca needs to rediscover his knack for goals too. He performs a different and sole function for us holding the ball and fighting to keep it on apex. Auba can’t do this and we tend to struggle without. Whilst he scores plenty of goals, you need to feed him to feet and sometimes when against teams packed deep, you simply need a player like a Giroud or Laca to open space, bully Cbacks a little. Pepe came close last game,… Read more »