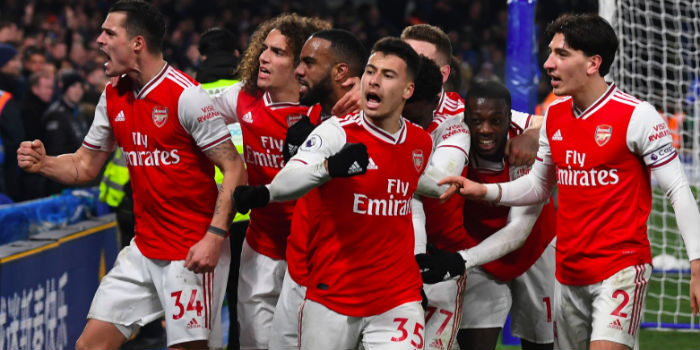 Mikel Arteta was quick to praise Gabriel Martinelli, Nicolas Pepe and Alex Lacazette for their hard work throughout last night’s 2-2 draw with Chelsea.

The Spaniard reserved special praise for the energy of the 18-year-old Brazilian who cancelled out the Blues’ opener with a stunning solo counter-attack.

The strike, his 10th of the season, means he’s the first teenager to hit double figures in a debut season for Arsenal since Nicolas Anelka. It bodes well for the future.

“To play in this stadium the way he’s done, and with 10 men, and to play against Azpilicueta who’s, in my opinion, one of the best defenders in the league…he was going against him every single time,” reflected Arteta.

“You need courage to do that. Then his energy…I wanted to take him off a few times because he looked knackered. He was cramping and the next minute he’s sprinting 60 yards again.”

Martinelli’s work rate was matched by Lacazette and Pepe who, while not getting on the scoresheet, grew into proceedings as the game grew stretched in the second period.

“Martinelli absolutely stepped up, but not just him,” added the boss. “I think Laca’s playing at a really good level and Nico [Pepe] as well.

“Everybody that’s coming in, they are fighting really hard in training to try to convince us to play them more.

“When they question some things, I tell them to speak on the pitch and this is them speaking on the pitch.”

Obviously, the next step is to get all three creating and scoring more chances. While last night was a particularly satisfying result given we were down to 10 men early on, the fact we only had two shots on target remains a concern. Luckily, after Monday night, we’ll have Aubameyang back from his suspension.

Proud of the team last night. Even after going 2-1 down, the I was impressed with the grit and determination. The character shown after that to get back into the game, given the circumstances was outstanding!

This man is going to the top as a manager. His hunger will drive him and his team to success. It helps that he had the wisdom of surrounding himself with experienced managers. I only hope the men in suit gives him the support he deserves.

I love the ‘ speak on the pitch’ approach (after working hard in training), makes loads of sense. As well as for the players to keep going hard all match, even when going a goal down in the last few minutes.

The prospect of Auba Pepe and Martinelli up top is quite interesting. Teams would be bricking it …

Guns Up
Reply to  Anonymarse

Rotation, and having a superb impact sub option on the bench. I would start those three and bring Laca in as sub FOR NOW, then reassess when his goal scoring form returns, which it undoubtedly will.

Billy Bob
Reply to  Guns Up

Could Laca drop into Ozil’s role against though tackling opponents? He links up play really well and works his butt off

Try Lacazette as a No10?

He’s good on the ball, presses from the front, continually sets the tone, plays on the front foot, I love him.

This has to be worth a go, particularly at home?

I actually agree with you Lacazette started out as a winger and no10 at Lyon and then that no 10 he would occasionally become a second striker before he was eventually a striker. After that he played as a striker or second striker and that’s how he got all his goals. He was killing it in ligue 1 because his goals and assist were really high because he was like a striker who also played a s a second striker or no10 and even on the wings. I think when he came to arsenal because he’s also a good finisher… Read more »

This type of performance isn’t new. We came back from two down with 10 men against Palace. We came back against Spurs with 10 men a couple of seasons back I think we generally have an honest group of players. We just have an unbalanced squad, lacking in quality in key areas, and directness and drive through the midfield. Hopefully Smith-Rowe plays 20 games, comes back ready to compete, saving us a fortune. Mustafi is uncoachable, I feel sorry for him, his face was pure anguish, but we’re probably stuck with him. Luiz is uncoachable, he’s 32, I like him,… Read more »

Yes, i totally remember that sequence of events. Saka getting on the ball and me screaming at Ozil to run into space but instead blocking Saka and then losing the ball and made a half-arse run and just stopped with the guy unopposed and causing an overload against our defenders

For a guy that has only won one game out of seven in the league, Arteta is getting a lot of praise.

Shows you where we’re coming from, doesn’t it?

This is a fair point, but he’s come into a difficult situation. The reality is some if not most of these players have struggled under 3 managers this season. Games like against Palace and Sheffield show the limitations of the squad and what Arteta has to work with. In that context, he’s doing a good job.

This sounds like something from the BBC comments section, Chelsea, Spurs, etc trolls playing down every bit of praise for Arteta or Arsenal. Do you remember how dire it was at the end of Emery’s time? We were going to get relegated under Emery. We were unmotivated, clueless, toothless, negative, conceding 20+ shots per game, players clashing with the fans, making every opposition team look like Barcelona, losing to anybody on any given day, a complete shambolic mess with results that hadn’t been as bad since the early 70’s. And Arteta walked directly into that house on fire knowing full… Read more »

Well said my friend.Emery is one of these coaches that tries to make football complicated when in reality it’s not.A fuckwit of a manager who I believe will never manage a major club again.

We are rebuilding, dude. There’s no hurry here. Patience is a virtue.

Some context pls. Out of those 7 games, 6 were PL games, 2 against Chelsea, 1 Utd, 1 CP and 1 Bladed, all above us in the table. Bournemouth is the only team that was below us in the table. Only one loss, against Chelsea, which we all thought was unlucky. Then Dean doing his thing again the other day. This setup is clearly much more solid and their is a clear structure and identity. Do you remember how bad the first few months Klopp and Pep had? They were then allowed to sign who ever they wanted to sign… Read more »

I can’t recall when was the last time Arsenal scored in this manner. One player making the counter attack count. It was simply beautiful.

“… Azpilicueta who’s, in my opinion, one of the best defenders in the league..” begrudgingly agree, but what a cunt he is. Worse still, I’d take him.

I didn’t think Pepe was all that good again. He had flashes of brilliance but he does not keep ball well enough for us still considering his potential.

Also when he feels he was fouled, he has this poor habit of flailing his arms complaining to the Ref or linesman instead of just getting on with it and chasing the ball back down.

Arteta really needs to get into his ear and tell him that.

When Auba returns, I’d much prefer to play Auba-Laca-Martinelli. I don’t think Pepe at the moment justifies a start.

OTOH, Laca and Martinelli were fantastic yesterday. Laca did not get his goal (offside from one of the few good Pepe moments) but he worked tirelessly for us and tried to create as much mayhem as possible up front. But he wasn’t left on his own because Martinelli was tireless. He was backing up Saka, who had a real task against the very impressive Hudson-Odoi (I mentioned last season was one to be wary of) Both teenagers did not disappoint the club. On the other flank Bellerin also provided output going forward like Saka even when we were shortfall of… Read more »

It’s great what Arteta is doing. He is involving ozil and giving him love. But when he isn’t in the team he shows that he has demands on the players to set a standard and anyone else will be left behind.

As much as ozil feels he is talented he also wants to feel party of the group.

Everyone is listening to Arteta and he tries and probably produced in training too.

Aside from that I think we will get there best out of him under Arteta. I think the balance is right to maximize his value and the needs of the team structure to be successful.

Imagine if we could get both Pepe and Laca to start scoring goals as well. We could become a very dangerous team (at least attackwise). I will be interesting to see who gets to start when Auba is back.

Also, it is truly wonderful to see the fighting spirit Arteta has instilled in this team again. It’s been a long time since it was as interesting/fun to watch Arsenal play, as it is now. Excited for the future