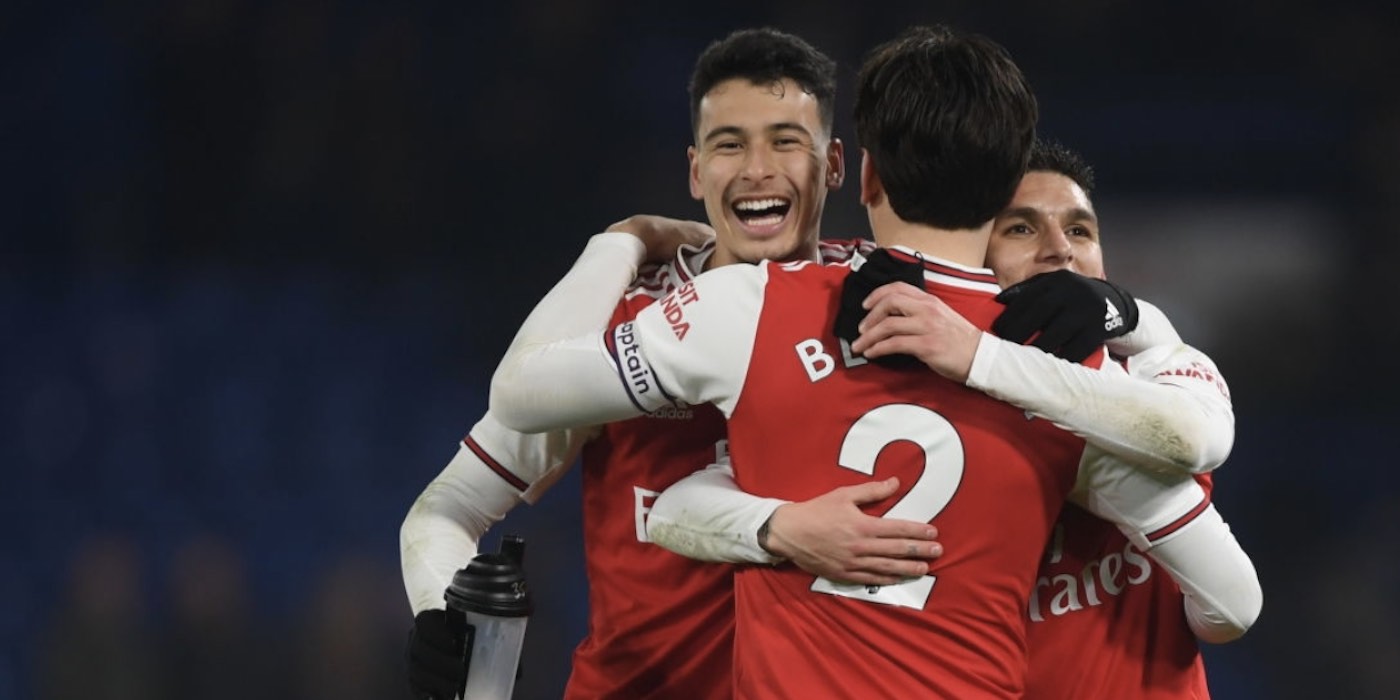 Hector Bellerin marked his return to first team action with a late equaliser to ear Arsenal a point in the 2-2 draw with Chelsea at Stamford Bridge.

Normally, a goal like that is the one which people remember most from a game, but with all due respect to the captain on the night, his strike was slightly overshadowed by that of Gabriel Martinelli.

The young Brazilian left Chelsea players for dust before slotting the ball home to make it 1-1 just after the hour mark, and his impact on the game was immense.

As well as scoring, he made 26 sprints – 15 more than the next highest on the Arsenal team, shared by Alex Lacazette and Bukayo Saka.

Afterwards, Bellerin was asked if there were any young players quite as impressive as Martinelli at the moment.

“To be fair there are not many,” he said. “A lot of people talk about his talent, but what people don’t see is that Gabi is a professional.

“He turns up early every day. He does all the stuff and everything anyone asks him to do. He is the first player to press and the last player to leave everything on the pitch.

“The goals are just a plus. He helps us in every single way and the thing that everyone needs to praise him for his attitude. That is what makes him a player.

“I think he is obviously really young in his career – so many things can happen – but if he keeps his head where it is right now, he is going to go really far for sure.”

The 18 year old has well and truly played himself into contention for a first team spot, and it’ll be very interesting to see what happens when Pierre-Emerick Aubameyang is back.

Also, let’s just take a moment to remember Man Utd had him on trial and passed up the chance to sign him.

For more on Martinelli and the Chelsea game, check out the brand new Arsecast Extra

18 and one of the best players in the greatest club ever!

Not doing badly and will get better!!

Forgot about the United thing. Hilarious

it probably did wonders for him as a professional. A sharp reminder that you need to keep working hard.

Guys like that make everyone around them better, that singular focus and motivation to be successful is what sets talented youngsters and superstars apart. At this point it is almost impossible to not hype him. Well it’s actually not hype it’s real, only thing left to see is how much better he’ll get.

Deserves a start in the next prem game whether it’s laca or Pepe that give way.

Love the young lad, immensely talented and hungry too… If he continues like this, he’ll be unstoppable and undroppable within a few months.

Extend his contract and put a 300 million release clause on it!!

That’s the key isn’t it? We must make sure to hold on to him. Everyone is talking about the young talent we have, and indeed it is exciting, but it won’t do us any good if they get their heads turned by some of the glamour clubs.

Given the rate of inflation in transfer fees, I’d be putting a billion pound release clause on it.

I’m in my late 40s and have become a fanboy again because of this lad. What a player! Best young player I’ve seen at Arsenal since Cesc/Anelka. A colleague at work (LiVARpool fan) said we’d probably got ‘the new Ronaldo’ (Brazilian one). He wasn’t joking either. So it’s not just us raving about him. I’m just a bit worried Klopp called him ‘the talent of the century’. Let’s hope his head isn’t turned. Stay with Arsenal Gabi and you might end up with your own statue. And Mikel, slap a 300 million quid buyout clause on his contract asap!

Neymar level talent but without the stinking attitude. Even celebrations are pure passion, no showing off, no dabbing or dancing. God’s finally rewarding us for what he put us through in last 15 odd years.

A united fan in the pub told me that fact, he said it in a way that if i were a true arsenal fan I’d either know or care about who he didn’t actually play for. and then kind of hinted he were some kind of reject, to which i said ok you keep your strikers i’m happy with your reject, he then insinuated there was something small minded and unambitious in this position but would you choose any of their strikers over him even at 18? i wouldn’t.

I am in love.What a player everything about him .can’t stop watching him on YouTube.

We have a real captain material in Bellerin. He’s grown up in the club and embodies it fully. Ditto also Xhaka who has never shirked from sticking his head out in a leadership position. Lacazette as well grafted for the team, did not get his goal but anyone who thinks he lacks motivation or work rate is clearly blind. He never stops trying to harry and bully the Cbacks for us, provide lay offs etc. Hopefully Sokratis recovers and enters the fray as well. he is another who should be given a leadership role IMO. ditto Leno who made some… Read more »

He could have such a big career ahead of him, and hopefully most of it is at arsenal, he’s one of those players that just remind you why you love football, everything he does on the pitch, his attitude, just raises everyone’s spirit, excluding anyone who has to defend against him of course

Which is why we need to guarantee him starts now! (Nothing to do with my FPL team of course).

After all those articles of great players that we didn’t sign over the years it’s nice to have someone that was passed up by a rival and is doing so well!!! Hope we can tie him up on a long contact.

It was big of Martinelli to take Man Utd on trial. But he made the right call in not signing them.

Can we all agree now that Martinelli is a special talent, has been brilliant this season and that he deserves our utmost respect and support for the future?

Because, as history has sadly shown, some of the same people here who are rightly singing his praises will be the same morons to hurl abuse at this kid if / when he hits a bad patch of form…