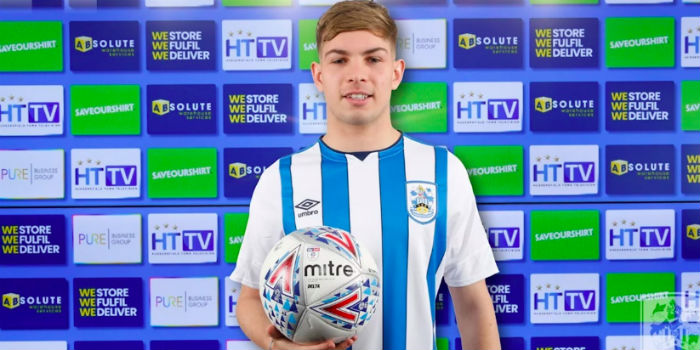 Arsenal have confirmed that Emile Smith Rowe has joined Championship side Huddersfield Town for the rest of the season.

This is the second January in succession that the England under-20 international has moved on loan in search of more senior football. Last year he undertook an exciting move to RB Leipzig but featured only three times after a groin injury kept him sidelined for several months.

Smith Rowe has made six appearances for the Gunners this campaign, including a first Premier League start against Everton under interim head coach Freddie Ljungberg.

Speaking about his new recruit, Huddersfield Town Manager Danny Cowley said: “We’re delighted to complete the loan move to bring Emile to the Club today, as it’s the culmination of an ongoing process that began in early November.

“Nicky [Cowley] and I spent a week at Arsenal in the summer and Emile is a player that we know well. We’ve got some good relationships with the Club and we’re very appreciative of them loaning us one of their very best young players.

“Emile will give us the creative link that we’ve been missing. He can play in a range of attacking positions and he can speed up our play. We’re really looking forward to working with him.”

Emile is the second player to leave on loan today. Tyreece John-Jules joined Cowley’s former club Lincoln City this afternoon. We wish them both the best of luck.

Smith Rowe: This team can do big things

Not a bad choice. Why not Leeds though? As long as Bielsa says he wants him…

They didn’t seem to have someone with his skillset, and it would have been good for him to learn how to better teams every three days.

Possibly because Biella had his opportunity with Nketiah and blew it?

Great move for ESR. 100% believe he will be a star for us. Good luck Emile, smash it!

Only an injury can stop his progress. Fingers crossed it works out well for him and for us.

Big prospect we should groom for Ozil’s eventual succession.

we have until then Cebellos to also compete with the German in that advance midfield role plus young Willock.

Smith-Rowe has tremendous potential and regular game time will see him improve.

I only wish Mavropanos was able to get a loan as well to accelerate his development. In some sense, if we get in another mid (say Emre Can on loan), I would not half mind Willock going out on loan either.

Well anything is pawsible at The Terriers. He might get a little hounded at first and be given a ruff time given his age but they’ll be barking up the wrong tree if they think he’s going to roll over and play dead. He’s great going furward and can be a golden retriever in terms of fetching the ball from opposition pawsession. He can also whippet in from wide positions and when unleashed can really raise the ruff, causing the opposition to have a howler.

I am Gooner
Reply to  HelderHughes

How…long did this take you to write?

Richie
Reply to  I am Gooner

Probably around 10 minutes. Or 70 minutes in dog years.

You don’t have a scooby mate if the terriers let him off the leash I’m sure he won’t come back to us with his tail between his legs, knew some team would collar him soon

He’s a good boy, can see him doing well.

I thought that was fucking hysterical. Who’s a good boy?

Smith-Rowe’s body type and athleticism remind me of De Bruyne. Not blazing speed, but quick enough, strong enough to ride a challenge, happy to go get the ball back. KDB’s decision-making around the box is sublime. I’m excited to see what Arteta can help ESM become.

I read that Harry Kanine is out until April with a hamstring injury. Oh and his manager Mourinho – what a b!tch!

Liverpoodle is gonna go for the jugular today then. Tear them to the bones. I don’t feel bad for them really. With that bitch in charge it’s even more deserved to have them running with their tail between their legs

Good luck to him hope he remain injury free, because Cowley brothers are good coaches, I remember when we played him at Lincoln City several season ago in the Fa Cup His football is very exciting.

And the way I know ESR he will get a chance and come as our own James Madison, or Todd Cantwell, they all got a chance to showcase their talents in the Championship.

All and all Good luck to him, coz it is always best when academy graduate actually Graduate to the first team

I agree. I like these Cowley guys. Thought they conducted themselves really well when we played Lincoln in the Cup a few years ago and that they have bright futures themselves. Hopefully they will be a good fit for ESR.

Huddersfield have bagged themselves a player here. They’d better fucking play him.

I hope our Loan Manager said exactly that to them before agreeing the move!

This is a great move. I think any youngster in our squad should have atleast 1 year of championship experience under their belt. This league is hard and it will turn kids into men.

Hope Emile stays fit and gets the game time to just push-on that step closer! Extremely talented but appears to recognise that talent alone is not enough. Keep up the hard work!

Have a great time there and hopefully return even stronger, Emile.

I’d make sure our young players got game time on loan. You want a talented Arsenal youngster on loan? Ok, here are the rules. 1. Don’t come to us with a PowerPoint. 2. Make sure you really need the player before requesting him on loan. 3. The player must instantly become a first team player. Not a squad member as back up for injuries. 4. If we see that the player is fully fit and just being used as a squad player (injury back up) and hasn’t started (injuries and suspensions permitting) at least 70% of any 10 league game… Read more »