Arsenal couldn’t make it 3 wins in a row but at least they managed to not lose after going down to 10 men, drawing 1-1 with Crystal Palace at Selhurst Park.

It wasn’t the best that we have seen Arsenal play, and there were again worrying signs that Arsenal couldn’t hold on to dominance beyond a half of play. Hopefully these things will come as Arteta is in charge longer.

It will be a tough ask now for Arsenal to be without Pierre-Emerick Aubameyang for three matches but with the team’s Premier League goals all but out of reach maybe its not as big of a deal as it could have been.

Crystal Palace 1-1 Arsenal: By the graphs 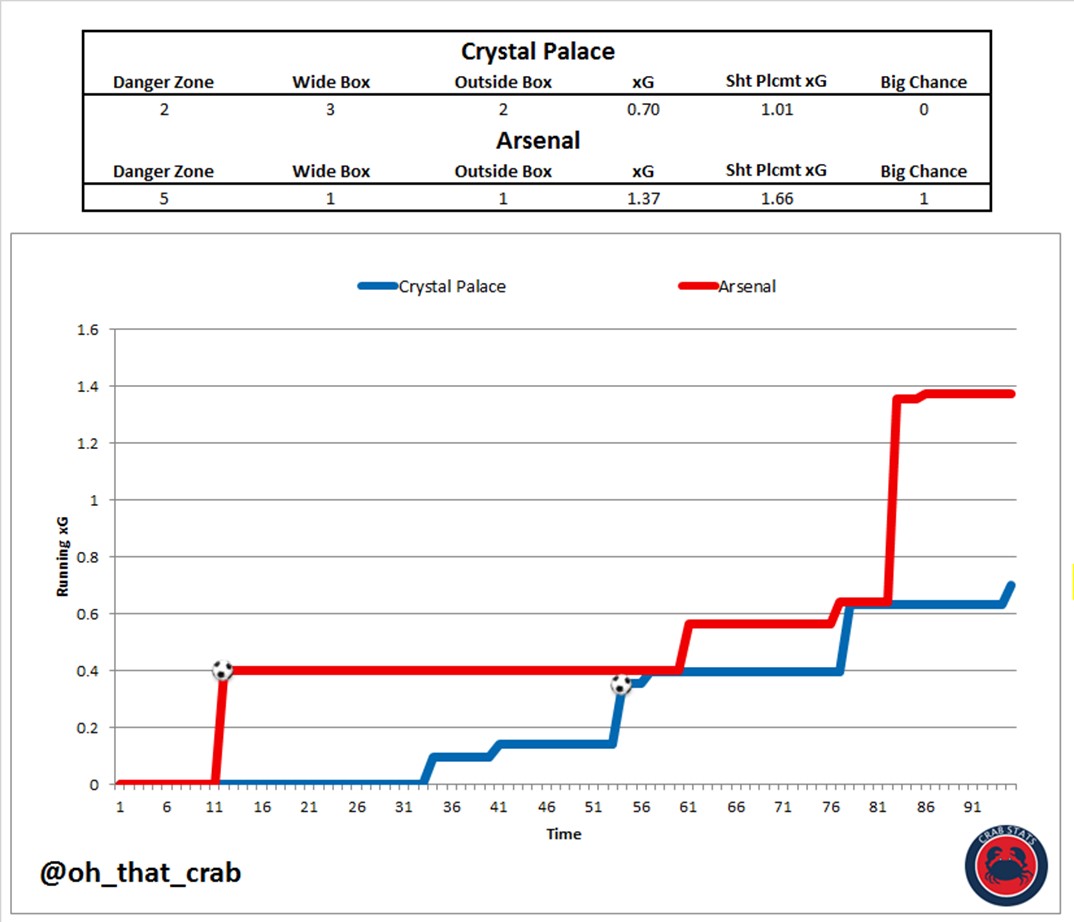 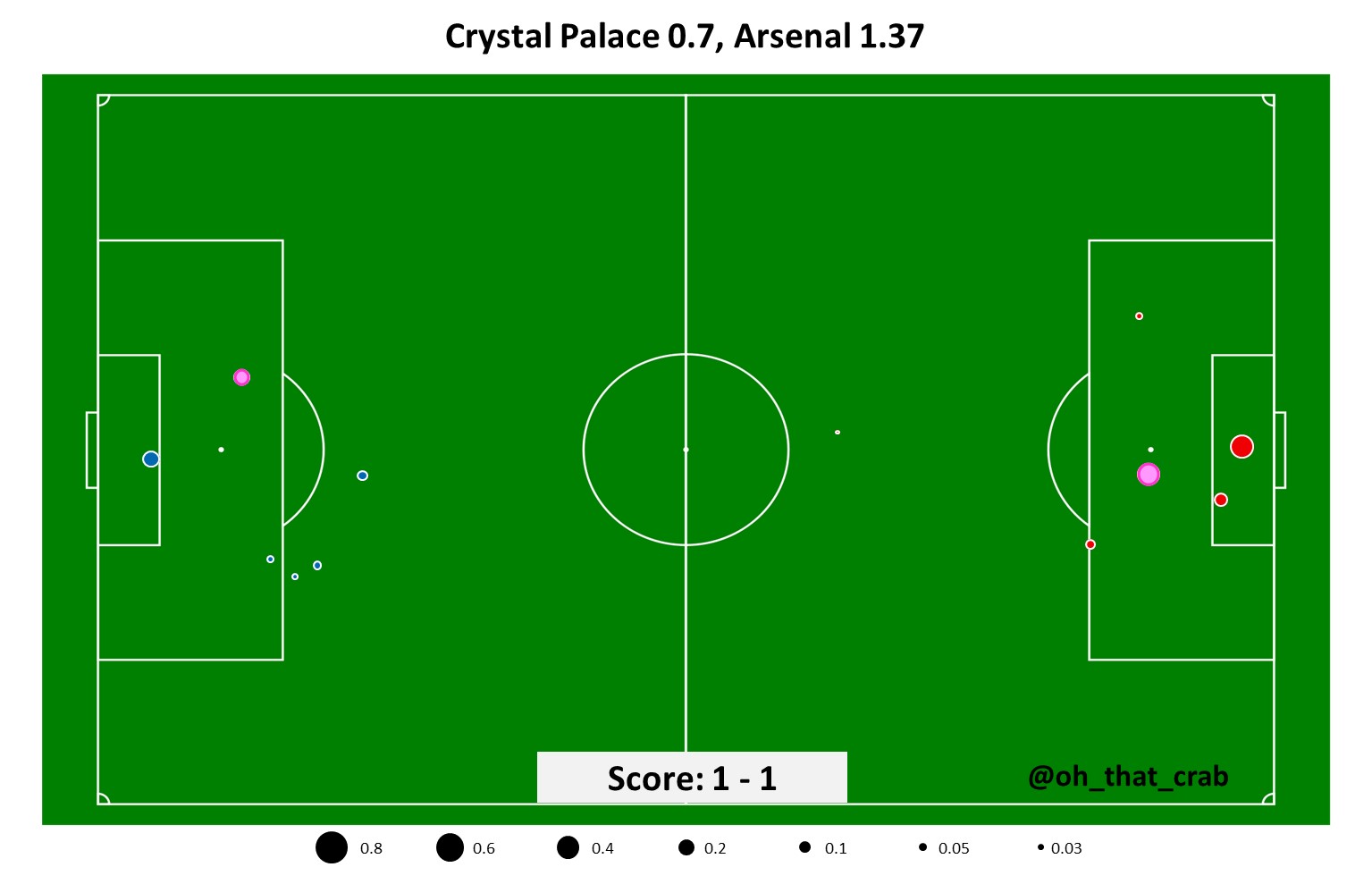 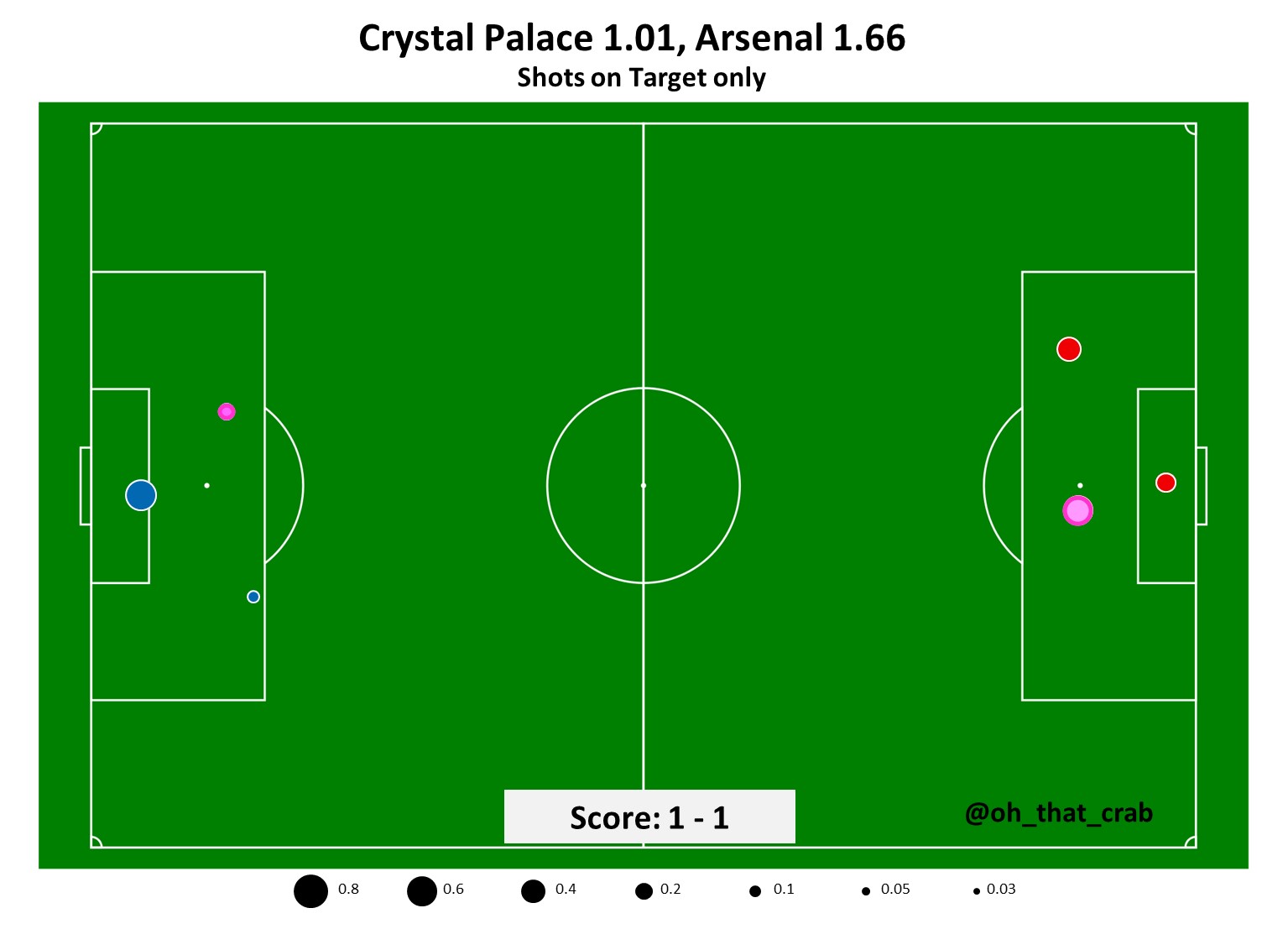 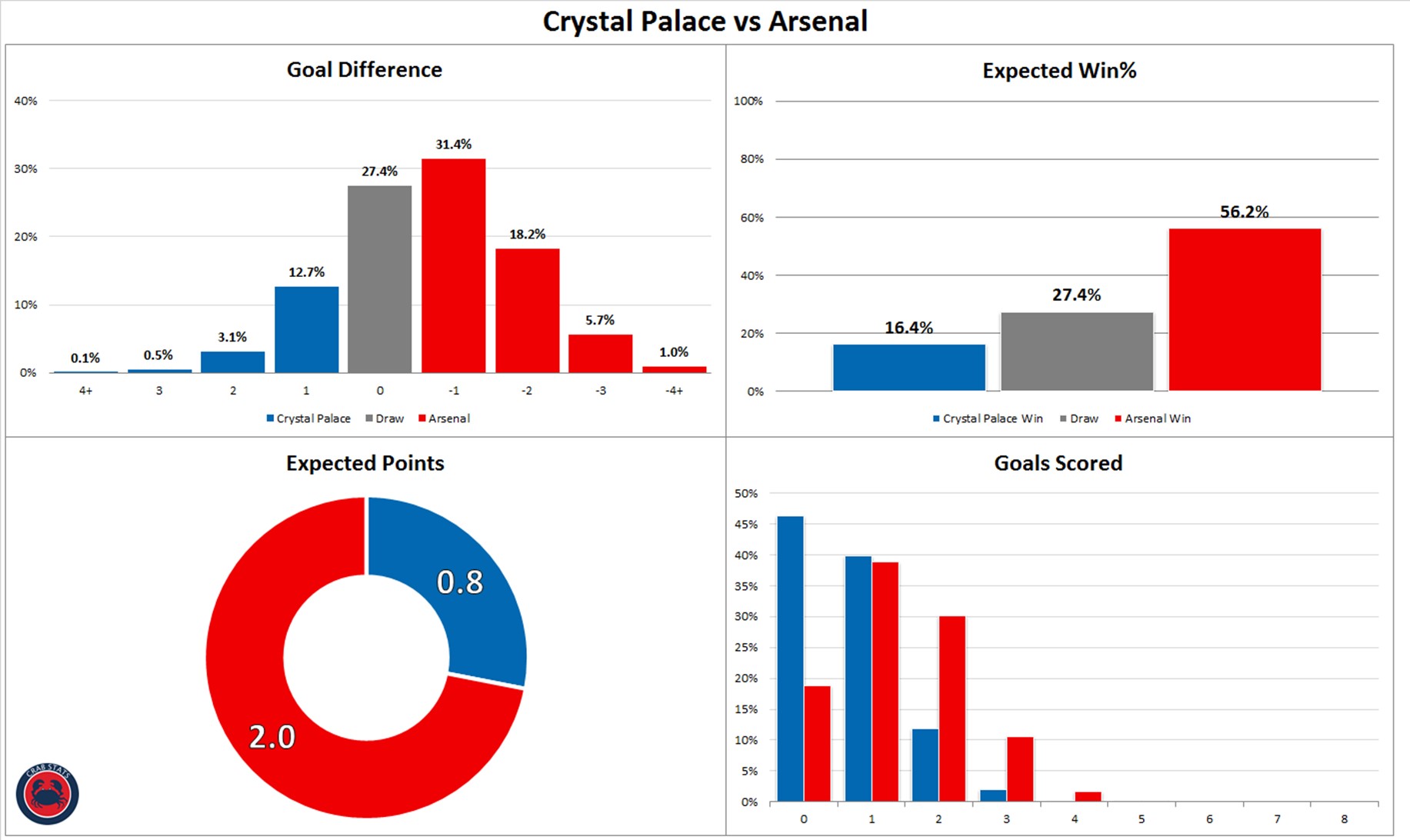 Crystal Palace 1-1 Arsenal: By the numbers

1 – Shot for Arsenal in the opening 25 minutes

Arsenal dominated the ball in the opening 25 minutes. They pinned Crystal Palace back and probed before finally opening up their defense with a well worked goal. The only issue was that this period of dominance didn’t lead to anything beyond the one shot which thankfully was converted. It was worrying again that Arsenal couldn’t sustain the control that they showed early.

The non-shot xG for the match really illustrates how poorly Arsenal did after the positive opening period of this match. 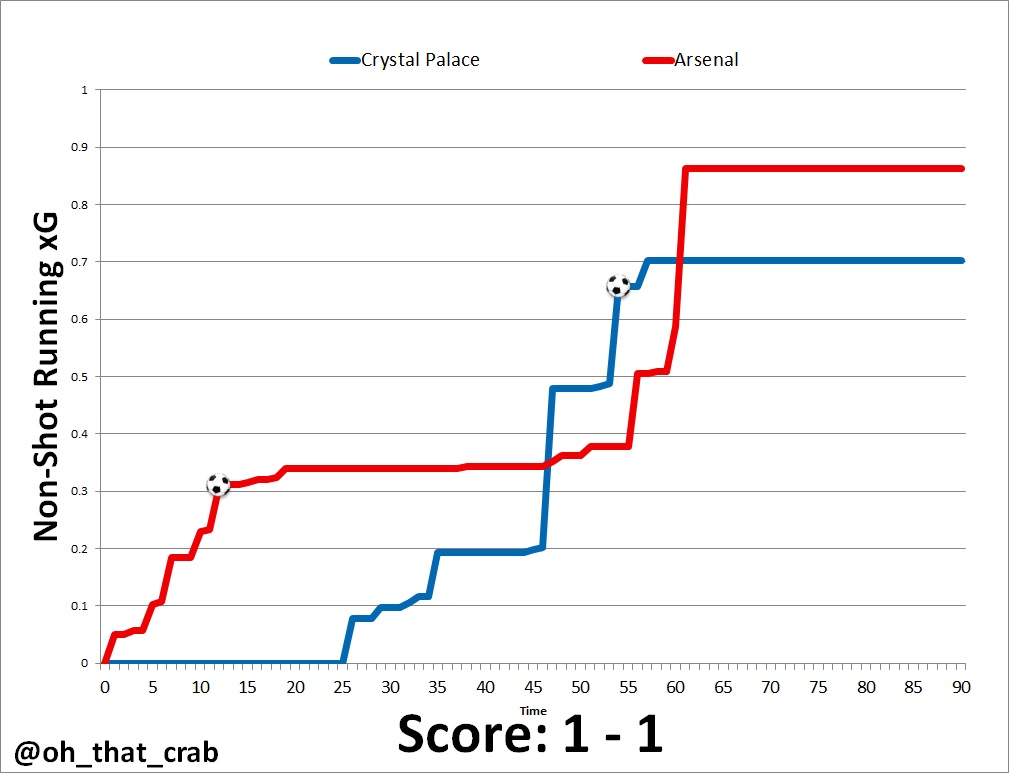 2 – Shots, tied for most on Arsenal (with David Luiz LOL)

5 – Times lost possession, tied for second most on Arsenal

3 – Tackles of 4 attempted, tied for most on Arsenal

Lacazette is going through a pretty bad finishing slump, he has gone 391 minutes since his last goal and with Aubameyang suspended more of the goal scoring burden will fall upon him. In this match we saw a bit of what he does good, with the link up play the led to the assist and a lot of the bad, his hold up play was not good when Arsenal needed an outlet to help get control of the match. I am not sure what the answer is to this but hopefully if he continues to play, he can get back into form.

1 – Pass into the box completed

David Luiz is a great passer, especially when he is given time and space to pick out a pass. He isn’t always the best defender (although he has generally been better since Arteta has taken over) and he really likes a speculative shot from distance. One of the nice things so far is that Arteta has put him in positions to maximize what he is doing well and minimize as much as possible what he struggles with.

Still variability in the performances, such as a good first half, poor second or vice versa.

If we can get that improved we will be very good.

Emery’s old habits of protecting a 1-0 lead will take time to wash off. On the positive note, our reaction to going 10 men exemplifies the newfound courage. We didn’t wilt or retreat defensively in fear. Onwards and upwards. The next 3 games will also show how much we need Auba to stay beyond this summer. This PL season is almost a writeoff, hopefully Arteta is able to imprint his ideas and have a good run in the Cups to lift spirits.

“One of the nice things so far is that Arteta has put him in positions to maximize what he is doing well and minimize as much as possible what he struggles with.”

And you can say the same about Xhaka, Torreira, Ozil, Maitland-Niles, Kolasinac. Not just positioning, but relationship to other players’ positions. A very promising start as a manager.

I feel like we’re working hard, learning structure and gaining confidence. I don’t feel like it’s “worrying” that we aren’t able to manage to dominate for the whole game because I think it’s to be expected.

Building a higher level of consistency will come in stages. Our plan is there but the opponent should be expected to suss us out and challenge us in periods of the game. Especially now. There’s a road ahead but I feel like we’re travelling down it positively

Mikel knows this is a results business, but I firmly believe results eventually match performance. We have consistently shown better performances so far with him in charge. Results will get better with time. Just have to keep plugging away at it and find more consistency.

Luiz should be banned from taking shots and free kicks.