THE LOWDOWN
Fresh from their Conti Cup semi-final showdown on Wednesday night, Arsenal and Manchester City square up again on Sunday in a top of the table WSL clash. The Gunners were 2-1 winners at Meadow Park on Wednesday evening but, in truth, they ought to have won more comfortably. Montemurro has the measure of City at Boreham Wood, having won all four of his games against Nick Cushing’s side there.

At the Academy Stadium, it’s a different story. A depleted Arsenal, with 17-year old Paige Bailey-Gayle on the wing, lost 2-0 in Manchester last season thanks to a pair of Georgia Stanway goals. The season before, Pedro Losa’s side were beaten 5-2 by City. Arsenal haven’t won at the Academy Stadium since Jordan Nobbs’ 35-yard free-kick gave them a 1-0 victory in the Spring Series in 2017.

Having lost twice to Chelsea, the equation is simple for Arsenal, they cannot lose. A defeat will make winning the league a very, very difficult task given the small margins for error between the Gunners, Chelsea and City. A draw makes Chelsea red-hot favourites for the title, but perhaps doesn’t quite bring down the final curtain on Arsenal’s defence.

There is a significant emotional factor for the home side too, Sunday represents Nick Cushing’s final game in charge of the club after a trophy-laden seven-year spell. His players would love nothing more than to send him off with a home win before he leaves to join New York City FC as assistant manager. Make no mistake, this game is a biggie.

TEAM NEWS
Kim Little will return for Arsenal after being rested on Wednesday evening, while Jordan Nobbs also ought to return to the starting line-up after a bruised ankle. Jordan was a stoppage time substitute on Wednesday evening. Jen Beattie’s calf injury has become a bit of a mystery, with Joe Montemurro suggesting she was close to fitness three weeks ago now, but she has still yet to return.

There is no specific timeline on Katrine Veje who is trying to shake of a foot injury. Danielle Carter [knee] is definitely unavailable. Caitlin Foord is unavailable, she is in Sydney with her national team ahead of their Olympic qualifiers. The U-21s don’t play again until Wednesday, so Ruby Grant, Mel Filis and Ruby Mace are all available.

LAST TIME OUT
Two goals on the counter-attack from Georgia Stanway gave City all three points when the teams met last December, as Arsenal negotiated an injury crisis. It was one of two defeats in the WSL for the league champions last season. Arsenal have won their last three matches against City, however, all three of those games were played at Meadow Park.

THE STATS
This fixture has never ended in a draw in the WSL, with both teams winning six games apiece.

Manchester City’s Steph Houghton and Ellen White have both won the WSL with Arsenal, while Arsenal centre-half Jen Beattie has won the WSL with both teams. Caroline Weir is also a former Gunner.

City have won their last four consecutive games in the WSL.

Pauline Bremer [1.54] and Vivianne Miedema [1.77] have the highest goal contribution average in the WSL. Bremer averages 8.38 shots and key passes per game, the highest in the WSL. Miedema is second with 6.03 [Statsbomb].

The two teams have three of the four most accurate passing centre-halves in the division. 1. Gemma Bonner [91%] and Jen Beattie [91%] and 4.Leah Williamson [88%]. Manchester United’s Millie Turner is third on 90% [Statsbomb]

PLAYER TO WATCH
Manu Zinsberger saved a second-half Ellen White penalty on Wednesday evening, only to find that Arsenal switched off for the resulting corner and conceded. Montemurro likes to rotate his goalkeepers, but the Austrian has become a clear favourite ahead of Pauline Peyraud-Magnin of late. Zinsberger has played 1440 minutes this season compared to PPM’s 810. 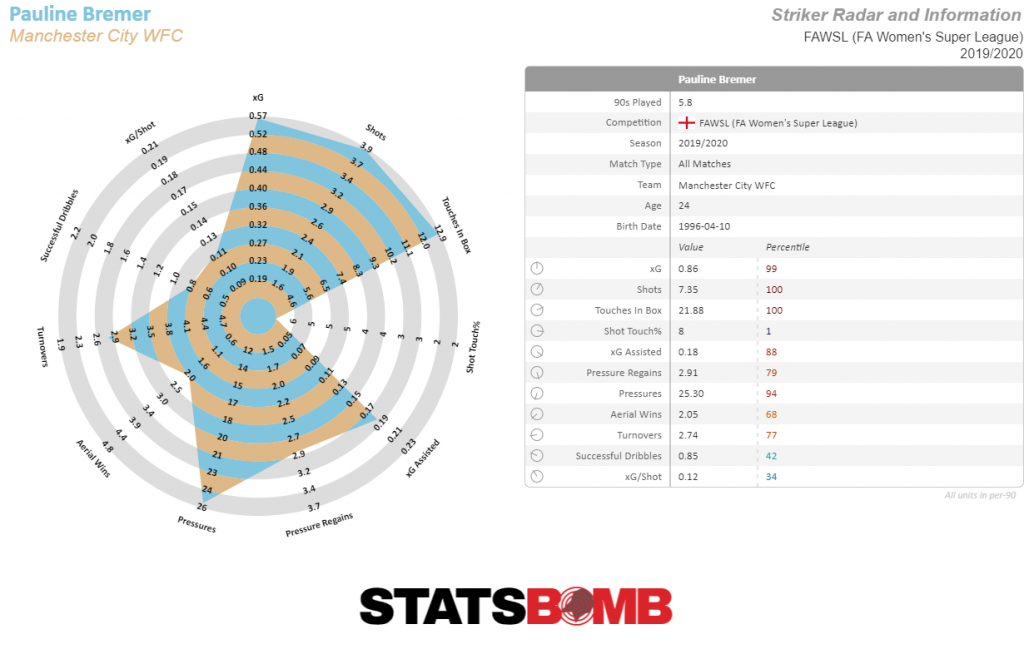 Manu is comfortable in the air, strong at claiming crosses and swift off her line. She does have a slight weakness for long-range shots, however, she is far more of a reflex goalkeeper. In Pauline Bremer and Ellen White, City have two of the highest volume shooters in the WSL. They shoot from inside the area often, especially at home. If the Gunners are to win, Zinsberger’s gloves will have to get dirty.

THE OPPOSITION
City are playing their final game under Nick Cushing and that emotion will superpower this encounter come Sunday. He is immensely popular with City fans with good reason, even if it does feel like the right time to hand over the reins and let another coach have a try with this group of players.

Recently, Cushing has trialled forwards Janine Beckie and Georgia Stanway at right-back. On Wednesday, Stanway looked out of her depth up against the likes of Beth Mead and Katie McCabe, it will be interesting to see whether Cushing perseveres with this experiment. Pauline Bremer was on the bench on Wednesday and I wonder if she might start this game.

HOW TO CATCH THE GAME
The game kicks off at 2pm on Sunday at Manchester City’s Academy Stadium. You can buy tickets £6.50 adults and £4.50 concessions. Otherwise, the game will be shown on the FA Player app, free of charge and not geoblocked. In Australia, the match will be showed on Optus Sports.

COMING UP
We’ll have exclusive player and manager reaction on the site on Sunday afternoon, as well as all the usual build-up and reaction to next weekend’s North London derby at Meadow Park. We’ll also have a bonus Arsenal Women Arsecast ahead of the Conti Cup Final later in February, details to follow!

I’d like to see Arsenal be a little more attack-minded when they win the ball in midfield. The team is very possession-oriented, and that’s a fine way to play, but I felt in the last game that they missed counter-attacking opportunities at times when winning the ball in midfield. Most often, after the ball was turned over around the halfway line, the Gunners would back pass and then try to build up. A lot of back passing for possession. It’s hard to score via buildup as the opponent has got back in numbers–and we saw that Arsenal really didn’t have… Read more »

Thanks, Tim.
Very highly charged atmosphere guaranteed, I would think.

I hate it when we play the same team two matches in a row, I always think we’ll lose one and win one.

Question for Tim – if Steph Cayley joins this summer, is that the end for Katrin Veje? Or are we just building up the squad?

Nah, it’ll be Mitch that will go. Though I’ve to confess I don’t know how long Kat’s contract is for.

Oh, of course. Feel so guilty for forgetting about Emma Mitchell! She has done well at Sp*rs, so perhaps she will stay there?

I believe I read/heard that Kat Veje signed for 30 months so she is contracted until the end of next season. So I guess (sadly) Mitch will go if a new Ozzie LB comes in.

You seem to have given up speculating on the if and when of Beat’s & Kat’s return Tim. With Kat the similarities to Jess Samuelson seem uncanny. No mention of any afteraffects suffered by Beth from the brutal battering against the hoardings she suffered on Wednesday? Tough woman is Beth and crucial to exploiting City’s weakness at RB. As is Viv pitted against Steph Houghton. I loved that quip from Wednesday “the City defender is still searching in the car park wondering where Viv disappeared to”. Magic.

Not sure there are any similarities with Jess and Kat. Kat has a niggling, stress fracture type injury that just needs rest and doesn’t have a definitive time frame. Jess snapped her metatarsal so badly that it crossed over to the next metatarsal and broke that too and tore a good chunk out of the ligaments in her foot at the same time. It was like she’d been in a car accident her foot was so bad. She couldn’t come back because her foot was basically mangled. Veje’s injury is just one of those that goes in its own time… Read more »

My similarities thing was more to do with both being Scandinavian, positional and longevity of injury rather than nature of injury, other both being
to foot!!

I hate it when our two senior teams are both playing at the same time! The Premier League team are playing in Burnley at exactly the same time (2pm Sunday) as the WSL match in Manchester. Which to watch?

Glad to see L’il Kim and Nobby back for this big game!