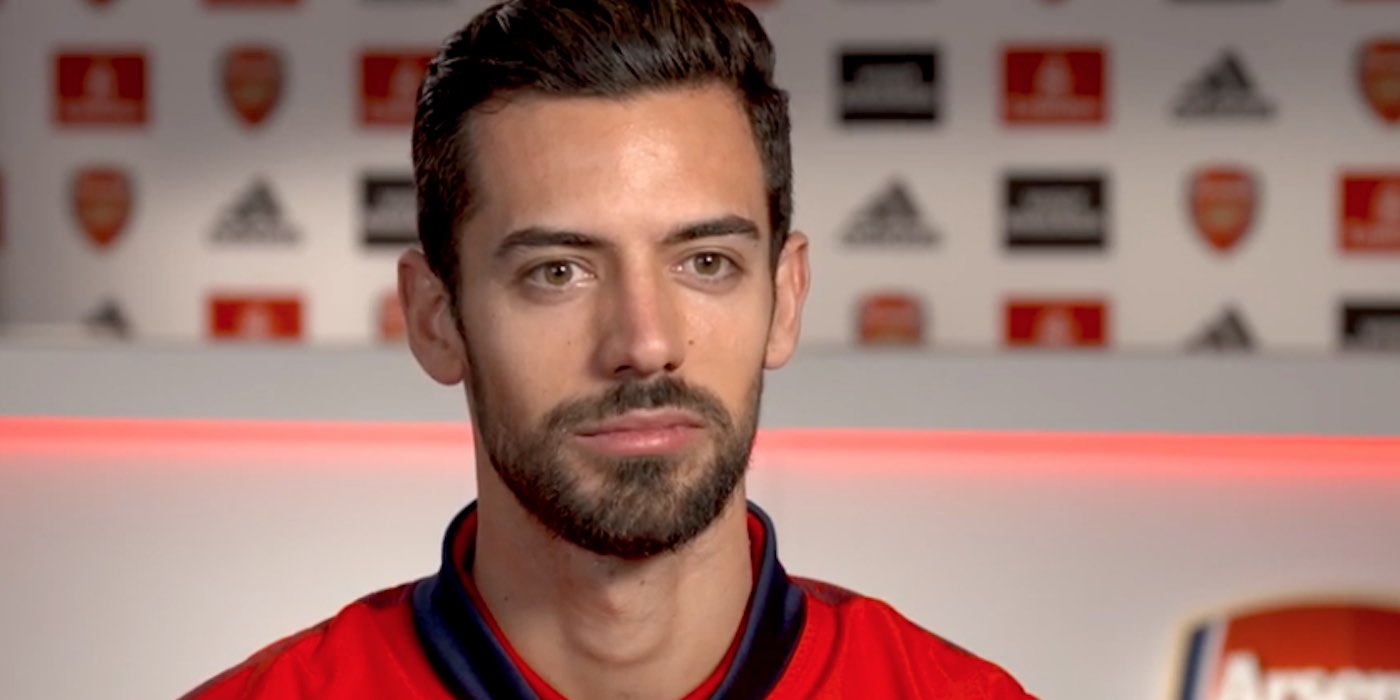 Arsenal’s new loan signing Pablo Mari says joining the club is a massive opportunity for him, and that he’ll work hard to make the most of it between now and the end of the season.

The 26 year old joined on loan today from Flamengo, and he revealed that initial talks about a move to North London began a couple of weeks ago after he caught the eye with the Brazilian champions.

“Arsenal told us that they were interested,” he said. “We’d just won everything with Flamengo.

“I won the league and the Copa Libertadores and was also named best centre-back in America, so that will have helped Arsenal notice me.”

This is Mari’s second spell with an English club having joined Man City from Gimnastic in 2006. He never played a game for them though, and spent time out on loan with the likes of NAC Breda and Deportivo la Coruna.

This move represents another chance in the Premier League for him, and it’s one he sounds determined to take.

“It’s a massive opportunity for me to come to England, which is the best league in the world right now,” he said.

“I’m a very professional player. I like working hard every day to achieve objectives.

“One thing I can control is working hard on a daily basis to help my team-mates to win football matches and repay the faith that Mikel and Arsenal have shown me by signing me to play here, so that’s my main objective.

“I want to take it one day at a time and achieve big things at Arsenal.”

For more on Pablo Mari as a player – check out this profile piece from Tim Stillman on Arseblog.

As we used to sing about Arteta, he’s the best looking Spaniard I know.

VAR will solve the problem
Reply to  Jack

I like the attitude. I would take “hard work” over “talent” any day. If Harry Mcguire is 90 mil, then u r a steal!

Anonymarse
Reply to  VAR will solve the problem

McGuire is a useless cunt

Seriously do we want someone who couldn’t break into the Man City side at the age of 12.

Yeah, I mean why not ignore what he’s done at Flamango recently and just make a snap judgment. Yes, yes … I’m sure that is the thing to do.

Do you know what year it is? Get back in the delorian and find the Doc.

The Voice of the Noise
Reply to  Homer

the man never even trained for the club he signed and went on loan. You people are always demanding expensive signings as though they’d be great and yet Martinelli came from a lower league than he was in and has both talent and hard work like this man. You people never learn, judging a player before he even kicks a ball.

I noticed that and had to double take! Cricket he must have been some prospect 😂

I hope he proves to be a shrewd signing.
Welcome to the best team in London

In the world.. You probably didn’t get the memo

There might be some team the world has never seen, that could be better than us. Hard to know, actually.

CB´s are often late bloomers. This could be a massive signing. Yes I like being more optimistic

CBs are the best whenever they bloom!

I may be biased…

A few years ago we also signed a Spanish defender no one had heard of in the January window. Hopefully this works out as well as that did!

It’s a body at least.

Was just about to ask where this leaves us with Mykola Matviyenko, then upon googling the spelling of his name, saw that the ornacle just announced that he is still likely to sign this window. Very very positive!

The Voice of the Noise
Reply to  Jim

Tasmanian God
Reply to  The Voice of the Noise

If it happens, witchcraft.

He sounds like he’s willing to do the hard work and often unexciting work required by a center half… so thats good. If nothing else, he’s cover for the position until the end of the season.

Are we still after the Ukrainian defender too, or is it just the one CB we wanted?

Was a regular starter for the best team in Brazil. Won the top domestic and continental titles as a starter. Voted the best defender in Latin America. What’s there not to like? Everyone keeps harping on about his failed stint with ManC, but defenders are indeed late bloomers and many a fine player had to endure difficult starts before coming into their own.

Considering Martineli couldn’t get in ahead of Lingardinho at yanited after his trials, I’m rather positive he’ll do well at the Arsenal

I just hope he smacks that little cunt Son in the derby. Then maybe act fucking shocked and cry.

It is indeed. He failed to move up at City, could not get a foot hold in the game in Spain. This represents a third bite of the cherry for him. At very least there is a motivation to perform and hopefully translated to a good hunger. The likes of Pepe by contrast IMO spoilt by too big a fee paid for. Sometimes, you pay that much for a player (see Pogba) and it douses the ambition and hunger. I don’t see good retention of the ball with Pepe or effectiveness plus he flails his arms at the officials every… Read more »

Man you get a lot of thumbs down. What have you done that gets everyone’s back up? I mean I’ve read what you right and while I might not always agree, it seems neither offensive or worth the hassle of voting down. Is it an in joke?

Nah it’s because he talks shit. That comment is case in point he was banging on how we should sign Pepe in the summer and is now throwing him under the bus.

I would not mind one more signing before window shuts.

Hope they are keeping a keen eye on Emre Can. We could also do with some midfield options.

Question will be on cost but again, if we can loan the German, it would be ideal.

Just defend well please. Dont make a ridiculous fuck up in your first 10 games (like overhead kicking it into our penalty box) and we’ll take it from there…

Dreaded YouTube highlight reels (I know…) look solid. Stand-up front-foot tackler, good in the air and likes to ping a Hollywood crossfield ball. Could be an absolute steal

I have a good feeling about this one

Amazing that some would be critical of the signing without ever seeing him play. He has won a couple of major trophies in Brazil after only 6 months service and played very well in a World Club Final v the Liverpool attack. We are getting him for a fee similar to Guendouzi and I suggest he will make a similar impression at the heart of the defence as the latter has in midfield. He was very impressive in the Club final in terms of his defending and distribution. He also has physical presence which is lacking in first 11, seemed… Read more »

I was with you there – right up until you argued the Emery was ‘rebuilding the squad in a very smart and efficient manner’…. and then the pink elephant that had been helping the trapped unicorn in my chimney, suddenly abandoned him to help my pig take off and fly over the roof and off down the street.

We’ve got a Big Fucking Brazilian!!!!

He is of spanish nationality…

Just saw this again. Made my day