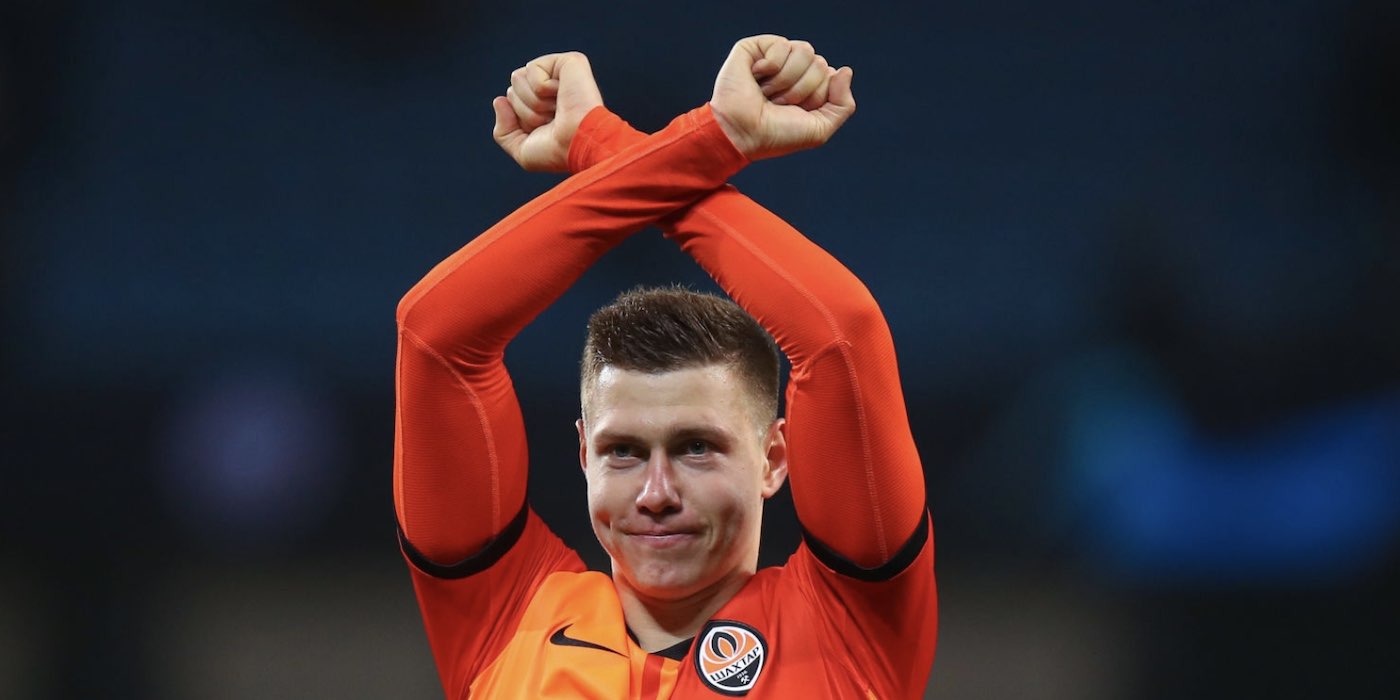 According to a report from Ukrainian outfit, Komanda, Arsenal and Shakhtar Donetsk have agreed a fee for defender Mykola Matviyenko.

The 23 year old was first linked last week, but it seemed as if the Gunners sights had turned towards Spaniard Pablo Mari. The Flamengo centre-half travelled to London with Technical Director Edu at the weekend, but despite undergoing a medical, returned to Brazil without signing for the club.

Discrepancies over the fee and the structure of the deal were cited, and it was hardly a positive sign that he went back to Rio less than two days after his arrival.

Matviyenko was reportedly a target for Man City, hence Mikel Arteta’s awareness of him, but if Arsenal are struggling to find a fee acceptable for Pablo Mari – a deal believed to be worth around €9m – it remains to be seen what they can work out with Shaktar.

Defensive reinforcements are already a must, but that issue was given greater significance following an injury last night to Shkodran Mustafi who was stretchered off in the 2-1 win over Bournemouth in the FA Cup.

Arteta insisted it wouldn’t impact the club’s plans before the end of the transfer window on Friday evening, but if Mustafi’s injury is long-term it would leave him with just three centre-halves, making the need for recruitment even more pressing.

Let’s see what Raul and Co come up with before 11pm on Friday. As for the latest update on Matviyenko, we can’t speak to the credibility of the source, but time till tell.

Is this a 2and choice to Mari or is this the 1st choice and the reason the Mari deal seems to have collapsed? ?

Even when it looks like 99% done, with us its never done until it’s done and even then it might not be done.

I feel you. But it´s done when it´s done that´s how it works

Everywhere in the world too

this funny as hell.

in 24 hours the club have bottled the mari transfer, hit a PR offensive about how Arteta will fix Mustafi, then seen Mustafi get injured (because fate) and now are scrambling to do another “buy now pay later” deal for this dude.

Bottled Mari? Or moved on to another option because they didn’t believe Flamengo’s valuation represented value for money. Walking away from clubs trying to squeeze us for every last penny represents good business sense. The irony is that the original Mustafi was a prime example of where we paid way over the odds because we were desperate and we didn’t have an alternative option in place. Hopefully a sign of a maturing approach.

If anyone’s a nonsensical and unfunny descriptor it’s you my friend.

No friend of mine (lol)

Make a DVD about it

Spuds fans and their inferiority complex. The only reason a Spud fan will come to an Arsenal blog to post comments is because you’re inferior. You’ve won nothing in 50 years because you’re crap and chronic bottlers

Well seeing as the price for any potential Centre Half jumped by about 10mil after last night, this is sure to be hilarious ?

Also blogs, note on the comment system (Don’t know if you’ll read this) but there seems to be any issue where the system is claiming I’ve already thumbed people that I haven’t?

Kentmonky, I just thumbed you.

I can vouch for the fact that I have never been thumbed, or even fingered, by Grymelock

Your support in these trying times is bring me to tears ? Though it could have something to do with all this thumbing…

I get the same, by the way.

That was VAR claiming you had thumbed.

I got that problem, too.

Just the tip of thumb?

Let’s hope his medical isn’t as expensive as Mari’s.

Despite what many may think of his performances, I was gutted to see the injury to Mustafi last night. He tries hard, gets work done, and it’s always terrible to see one of the boys go down hard. Get well soon Mustafi – all the best for a speedy recovery you glorious and slightly mad tank you 🙂

Matvi and Mavro, and perhaps still Mari, would be a fun sounding if not particularly impressive back three!

We seem to be targeting man city cast offs and rejects this transfer window. Needs must I guess….

Arteta memorised Man City’s player database before checking out.Saves the trouble of hacking into it like LiVARpool.

A bit short for CB. Not excited.

I really hope theres nothing to this rumour. He looks very average. A little bit better on the ball than regular defenders, but thats expected considering his smaller stature.

Who cares we have our own MSN – Martinelli – Saka – Nketiah !!

I loved his single “Get Out of Your Lazy Bed ” when he released it back in the 80s.

Another Paul
Reply to  rellends

Never in sight when you need it.

If its true that we are struggling to find 9 million for mari then when are in
Serious trouble going forward.

Some kind of skullduggery here?

Cancel the Dubai trip, save a couple of Million and spend it on a CB whilst doing some proper training at home. Everyone is a winner!

We will be getting paid to go to Dubai I would venture.

Because world class defenders want to play in the CL?

I know a lot of fans are frustrated. But I actually understand these January strategies. No big club is going to let their rivals know what they are doing, I believe we will sign a defender or maybe 2, and probably a midfielder permanently or on loan. We will know this by Thursday or Friday before the window shuts. There’s no way we going to continue without replacing Chambers and possibly Mustafi. And as for midfield we need mobile legs, someone who can play with Torreira This window is tricky, it’s not like the summer window were players need to… Read more »

Can’t wait for the drama of deadline day on Friday. Harry Redknapp in his car, Peter Odemwingie scaling the walls of other team’s training grounds that haven’t signed him, Sky Sports reporters getting sex toys inserted into their ears. The best day of the year.

It’s weird but I’m not as worried about the centre back issue as I was with Emery, but then that was kind of a collective issue. Given Arteta seems to be able to clearly get across what he wants from his players they all suddenly look a lot better and because of that we also look better defensively. While there’s still a long way to go we’re headed in the right direction and it’s great to see. Whoever comes in, if anyone, they’ll have a decent chance of integrating pretty quickly.

Is this guy even good? Does anyone know about his abilities or war he’d him play?

Smoke + Mirrors Cloaks + Daggers…. Greta Thunberg + ANTIFA are pulling the biggest trick since Keyser Soze Not to be outdone… Raul tries to buy some Ukrainian lad, Shaktar want too much money. So he uses his agent friend to stage a flight and medical for some Spanish lad, who’s a client of his agent mate. Even getting the guy from Goal to meet him at the airport. This then forces the hand of Shaktar to lower their price for Matviyinenko. So we can move quickly to then sign Upamecano from RB Leipzig, on a pre-contract for next summer.… Read more »

Kroenke keeps embarrassing us! Why this guy builds a 5 billion non soccer stadium while he sacrifices Arsenal growth baffles me. We cannot be scrapping for these cheap deals, it’s always a gamble. Arsenal shouldn’t be gripping in the obscure corners for a player! We’re not like some small club! Common Kroenkes enough!b

Some time cheap punts come off.
Price is what you pay, and values what you get.

An article on The Athletic mentioned a few weeks ago about the breakdown of transfers in the final stages.

It said how personal terms and fee structures are often propelled as the reason, but it’s usually something to do with a failed medical. The clubs avoid publicising this as it would damage the value of the player involved – wonder if this could have happened with Pablo Mari

I’d rather reinforce at CM/DM with Emre Can. We need cover there too. And Emre Can represents a rare opportunity on a PL proven player who can cover both Cback and DM. lets not forget Granit has done decent at Cback cover as well. So I’m not sure I share the view we have a shortfall at Cback in terms of numbers with Sokratis, Holding, the soon to return Luiz plus one of either Can or Xhaka. What we do lack at Cback is quality not quantity. Particularly as well with Saliba entering fray next season, Mavropanos will return to… Read more »

I think he has largely stumbled around in market, been more creative than Mslintat but some hits some misses.

Also come summer, we will likely need to buy a striker (with Auba likely poached and even if Martinelli and Nketiah are promoted) Also in need then potentially CM/winger with Pepe flattering to deceive at the moment leaving us potentially Nelson, certainly Saka on wings only. A Ziyech or Fekir could be very useful as they can also play through number 10 role and we need to move on from Ozil (Ceballos at the moment uncommitted) So if we can get Emre can to fill at DM to rotate with Granit or Torreira, allow Guendouzi room to grow still plus… Read more »

I don’t see an injury crisis at Cback. I see a concern and a watching brief. Sokratis is back. there is nothing wrong with Holding (aside from not tracking his man last match) Luiz will also shortly return from suspension. Mustafi is Mustafi and more likely than not he is made of strong material and will be back again to haunt those who want him out. Granit can also play at cback if need be. Its manageable and far from crisis. Certainly unwarranted to plunge into market for a cheap option at cback rather than await the summer and buy… Read more »

Plus as is – as if we have not brought in useless assets on the cheap which we have had massive difficulties getting off the books. Not talking about Park Chu Yong or even Debuchy, which were brought in to hedge against risk and ended up loner on books than need be to hardly any significant contribution… we have the likes of Mhkitaryan and Elneny still on the books when we needed to bring in better quality in both their intended roles. Jenkinson was probably the most useless signing of all, a player many prefer to wank off to because… Read more »

Either I have been thumbing in my sleep or the site has a glitch.

Could somebody tell Blogs his thumbs up/down system is acting up. The buttons seem to have a life of their own.

Shhh – they’re working on a breakthrough in AI thumbs. We’re all going to be replaced.

Once they add the predictive posts there will be no need for us.

I looked on YouTube and he seemed to be playing full back? Also he didn’t look great!

He’s played all across the back line and done pretty well in every position, which may be part of what’s attracting the club.

Debuchy was playing well until he got that terrible injury caused by that brute,Arnautović.