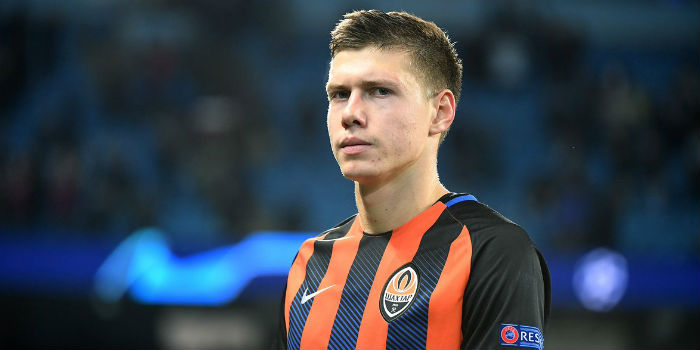 Arsenal’s hunt for defensive reinforcements has reached Ukraine with the agent of Shakhtar Donetsk’s Mykola Matviyenko claiming we’ve made contact about a possible January deal.

Matviyenko, 23, is a left-sided centre-back with 61 appearances under his belt for the Ukrainian champions and 26 caps for his country.

Speaking to Komanda 1, representative Yuri Danchenko said: “My colleagues and I have been constantly in contact with representatives of Arsenal and have held meetings. The Gunners have contacted Shakhtar and we’re hopeful negotiations will succeed.”

Football.London claims the player has been on Manchester City’s radar having featured four times against the Premier League champions during Shakhtar’s two most recent Champions League campaigns.

Since losing Calum Chambers to a season-ending injury, Arsenal have been linked with a number of defenders this month, including RB Leipzig’s Dayot Upamecano, Bayern Munich’s Jerome Boateng and PSG left-back Layvin Kurzawa.

We’re a little sceptical about the link, we have to say. As much as we’d love to sign Oleg Luzhny Jr, this could well be a case of an agent using Arsenal to generate a bit of buzz around a player who is either looking for a move or trying to negotiate a new contract.

Transfermarkt says his current deal with Shakhtar ends in the summer of 2021.

Well oh plays as well as Vermaelen did before his injury then he would be a good signing. I remain sceptical

I think loan move for a defender in January would be more sensible. We will have Saliba in the summer. Sokratis, Chambers, Holding, Saliba plus Luiz. We add another one in the summer, perhaps

We are in January…!

I also am sceptical, and I am also skeptical, as well as a bit skeptikal.

2 goals against Everton would be great ?

‘Shkodran, Ukraine is lovely this time of the year..’

Ukraine is awful this time of year…

Lots of nuke-rain I hear…

I know this will be unpopular but haven’t we done the slagging Mustafi stuff to death now? I feel like it’s just flogging a dead horse. We all know he’s not good enough and it’s now just unfortunate when he ends up in the team and that’s not really his fault anymore. He should have been moved on, wasn’t and that’s the executive committee’s fault for not recognising the issue when his stock was still relatively high. We missed our chance when Juventus wanted him a couple of seasons back. Since then his form fell even further off a cliff,… Read more »

The guy keeps making mistakes you wouldn’t expect from a pub team – what are we supposed to do – cheer him and applaud him? The fact that, match by match, he’s costing us more and more points clearly doesn’t bother you. What does seem to bother you, however, is those of us who have had it up to here with his mistakes and mediocrity having the audacity to voice an opinion on the matter. Sorry mate. Football fandom doesn’t work like that. As supporters, we are all entitled to our opinions and if they don’t match yours – well… Read more »

I agree with both your points but my final take is, ‘He doesn’t select himself’

but he decided (I actually do not know this) not to leave this summer.

Well, in an interview with a German newspaper that was actually posted here in parts, he said that his agents brougth interested clubs but those offers were not acceptable for the club. So it seems that we didn’t want to sell him at just any price, but expected a certain minimum fee to be paid. It is – of course – understandable that Arsenal want to cut their losses, but if the club is choosy, then it is not purely the fault of Mustafi that he is still here. Obviously I can’t tell you if that is the truth, but… Read more »

I never said it doesn’t bother me that he is costing us points. What bothers me is that the club didn’t move him on because now the whole situation is poisonous. I’m well past just having a go at him because in the end it’s doing no one any good.

If hes cheap. Worth a punt. We need bodies and hopefully hes better than some of the ones we have.

He’s young, played for the country and City is interested in him. All the signs that he is cheap are there, right?

So, like a Poundland version of Stones a few years ago then?

Dont get this if hes cheap stuff.
I couldnt care less if he costs 100 mil or 10 quid. If hes scouted and deemed good enough by Arteta then thats good enough for me.

Left sided center half who’s under 25 years of age? Worth it if the money is right (~20m).

Taxi for Mustafi. I’d even help him pack.

Ozil really didn’t do anything so not sure why Lampard was concerned with him other than maybe they should have had a player marking him if he drifted out wide. It was a great effort on our part – we actually played much better with 10 than 11, but Lampard is right that a Chelsea side up 1-0 playing virtually the whole game against 10 men should not have drawn that game.

My interpretation is that Lampard worked on tactics with his team to defend against Ozil drifting wide. When we went down to 10 men Ozil was much more central but Chelsea didn’t change and so weren’t able to capitalise as much as they could have.

Because regardless of current form, any manager / coach knows they ignore Ozil at their own peril. Despite so much time benched, he’s still in our top numbers for chance creation. Leaving him time and space is leaving the door open.

@mpls. He’s created zero big chances this season which loosely translates into increasingly the chances he creates require the shooter to do a lot of work – ie the expected goals from his chances are very low. He’s a big name but he hasn’t been consistently dangerous in several years now

He’s a dinosaur. Slows the game down and always passes backwards or sidewards. He’s the antithesis of the dynamic, pressing game we’re looking to play. Time to move him on.

The Spoon
Reply to  Mouise

He can have him, straight swap for Kante.

An opposition manager saying that Özil was our most dangerous player to them while our own fans moan about how ineffective and “useless” he was? Mesut Özil ever dividing opinions since 2013… I guess this saga will never end.

I’m with loose – I don’t think Lampard was calling Ozil our most dangerous player so much as complaining his side failed to adapt tactically to Arsenal going down to 10 and the resulting tactical shift from Arteta. Ozil contributed nothing before he was substituted

Looks decent. If theres one raw quality that I’ve always cried for in our defenders, which I feel we lost in part due to the loss(and advancement in age) of Koscielny, is pure pace. Playing a high line with slow and error prone centre backs is just Arsenal roulette. We can afford a not so speedy playmaker and box to box player but not in any of the other positions with our style of play.

Are we trying to flush out all the agents whose clients have contacts ending in 2021 to show their hand?

We had opportunity to go for Soyoncu 30m+ which Leicester bought and he’s been great for them. We decided to sink 27m instead into a relatively less tried (19 senior games only) Saliba who would be unavailable this critical season for Emery. Go figure. Now we have too many half cooked Cbacks. …granted Mustafi has his issues, clearly Arteta does not deem Holding that much less of a liability bc he could have started him yesterday. Luiz is a much older Mustafi. Chambers is OK but out injured also has made mistakes. Sokratis is perhaps the only reliable Cback but… Read more »

Only problem with your narrative is that Soyoncu was bought the summer of ‘18 not ‘19. So iiwii

What is with so many people’s need for validation on the internet? I HAVE BEEN ADVOCATING THIS FOR SEVERAL SEASONS. Jesus.

Is his name Mustafi? No? Okay then sign him up.

I’d take anyone over Mustafi. This guy has a good vibe around him, but I’m concerned about his height, only 1.81 m which is barely enough for a CB. Of course he could have a strong jump, etc. and Cannavaro for example was 1.77 only if I remember correctly, but still… 1.87 is the starting/ideal height for a CB for me, and still they could have enough pace, agility etc… Above 1.92 they are usually slower and technically weak, most of the time.

When David Ornstein says it, I’ll believe it.

Looks like Szczesny, but too short for a centre back.

Why? He used to pass you fags from the shower window?

This agent could have invented that Spartak Moscow, or something like that are interested in the player, but Arsenal?? Seems too weird to be made up, so maybe there is a grain of truth.

To be honest, I’d agree about any defender, only if we stay off that injury-prone French left back.

Where’s the poo meter when you need it?