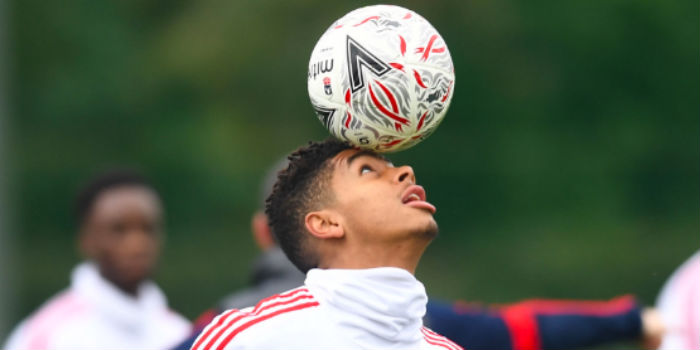 According to the Independent, Tyreece John-Jules will spend the second half of the season on loan with League One side Lincoln City.

The Academy striker, 18, was included in the squad that toured the US in pre-season and was on the bench for the 2-1 defeat to Chelsea a couple of weeks ago.

He had been pencilled in to make his senior debut in the League Cup earlier in the season but picked up an injury.

So far this season, he’s scored five goals and made two assists in 12 Premier League 2 games this season.

The report claims that assurances have been made that John-Jules will get game time at Sincil Bank. Lincoln, managed by Michael Appleton, are currently 16th in the table.

A number of youngsters are expected to agree loan deals before the month is out. Eddie Nketiah, recalled from Leeds, and Emile Smith Rowe are both in demand. Ben Sheaf has extended his spell at Doncaster Rovers, while Deyan Iliev and Jordi Osei-Tutu are in Macedonia and Germany until May.

any news on incoming loan players. methinks we need a cb, and a fullback at the very least

We’ll take care of your boy 🙂

I am Lincolnshire born and bred. As a kid I used to sell programmes outside Sincil Bank for a free ticket to watch The Imps, and while Arsenal will always be my first love, I still follow Lincoln’s results closely. This is a great move for John-Jules and for Lincoln. They’re a club on the up. The cup run a few years back (the year Arsenal knocked them out in the last 8 – a very special game for me) was a turning point and they’ve not looked back since. 2 promotions in 3 years and regularly selling out home… Read more »

Did anyone else give him a thumbs up after reading only half of the first paragraph? 😀

All this time I thought you were born in Liberia..

Arsenal’s academy has produced a number of good attacking players in the past few years but we never seem to produce defenders. And defense has always been a problem at Arsenal. It’s time for the board to invest in defense because we are well stocked with attacking players.

I can’t wait to see what name he will have in the Gentleman’s weekly. John-Jules is hard to improve on, quite frankly.
Enjoy your stay, Sir, and come back home. You’re a gooner. That’s for life.

Interesting move. I can’t say I know too much about Lincoln, but John-Jules is a lot more combative than most strikers we’ve produced and has always seemed inventive yet pragmatic for the U23s, so I expect he’ll adapt to the harsher aspects of League One better than some others might. Still, it won’t be easy and I’m looking forward to keeping an eye out for Lincoln games

Iliev plays in Slovakia, not in Macedonia, by the way.