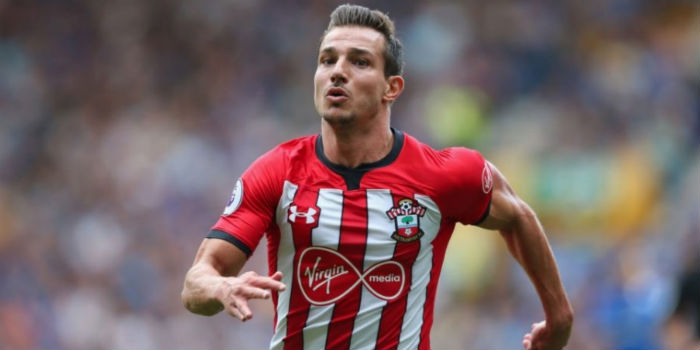 According to the Telegraph, Arsenal are still in the hunt for a right-back and have identified Southampton’s Cedric Soares as an option.

The 28-year-old will be out of contract in the summer and it’s said that the Saints would be open to a cut-price offer in the hope of recouping the £5 million fee they paid to Sporting Lisbon in 2015.

Hector Bellerin’s return to fitness and the recent promising performances of Ainsley Maitland-Niles, who has ably covered for the Spaniard in recent weeks, would suggest we’re better off spending our limited resources reinforcing other positions.

That said, with Calum Chambers out for the season and Shkodran Mustafi potentially facing a spell on the sidelines, perhaps we’re wary of being caught short.

Soares has plenty of experience. He was part of the Portugal side that won Euro 2016, he’s notched more than a century of games for the Saints and has European experience.

Even for a cut-price £6 million, we’re not wholly convinced.

I always thought he was a decent FB. For that little (relatively speaking), I wouldn’t mind too much…

It’d be a great signing. The next nacho Monreal.

We need a right back like we need a goalkeeper and an up and coming winger.

And besides, if AMN and Bellerin both get injured we can just play Saka there. That rule also applies to every position on the field.

Is he our 3rd or 4th choice keeper?

Why do you have him behind Martinez?!

Pure speculation here but while AMN has performed well, and has been more than willing to cover while needed, if he doesn’t see himself as a fullback then we need a permanent option to cover/put pressure on Hector going forward.

With all due respect to AMN, if he shuns the right back position then he probably needs to move on to get the kind of football he wants. I don’t think there’s a winger or a CM in him that’s good enough to play for Arsenal.

Not specific to this story – but what do we do if Barca’ come in with a big offer for Aubba ? Suggestion is they are seriously considering it. This won’t be popular. But if they did offer Big – £50 million plus, I’d take it. Bring in the Ukrainian and the Spaniard – maybe this guy and still be quids in. We have opted to keep EN – and with him and Martinelli and Lacazette, we could see the second half of the season through with those options. There’s obviously a counter argument. But we are a selling Club… Read more »

I wouldn’t let him go for less than 100m I’m January. They need to show us that Coutinho money!

You won’t get that for him at his age. Anything over £50 million would be serious money in this context. The counter argument is clear.

But at the same time we could seriously rejig our defence and let the other three – forwards – show what they can do.

We signed Auba for 56 million pounds two years ago and he’s shown no signs of regressing. In fact he’s flourished in his role despite playing out of his favored position and was a golden boot joint winner last season. He’s our captain and our talismanic striker and we are in the Europa trying to win it to get into the cash-cow called the Champions League. And your suggestion is to agree to a 50 million odd bid to Barca just because you are hopeful that Lacazette or Nketiah or Martinelli would score the shitload of goals that Auba has… Read more »

Yes, I get the counter argument, as I said. But precisely because they – Barca’ – have been caught before, means they won’t go over the £50/£60 million fee. What you’re suggesting is a fee, that a player five years younger might attract. Given the paucity of our budget, the point is we can rework our leaking defence and allow EN and Martinelli full reign. I suppose it comes down to whether you believe they could do it ? I actually think that they could. Although I accept others might not. It’s a gamble. But if Arteta is to succeed,… Read more »

It’s a gamble which we should not be taking in the current window especially when we have a excellent young manager who seems to be moving us in the right direction and we have a solid crack at the Europa league. Think about it for a minute, would you give us even a faint chance of us winning it without Auba and you will have the answer to the question you pose. Like it or not, top 4 isn’t too far considering the competition with Chelsea Spurs United and Vardy-less Leicester. But it is unlikely for sure after Unai screwed… Read more »

But as you say, a crazy offer would make us consider..50-60 mil is close to being half way at it.

Then no dice! We’ll keep him here then and hopefully his goals can fire us into the CL through the EL. There will be no shortage of suitors in the summer, if still wants to leave we can sell him then. But it would have to be a crazy offer for us to sell him now.

Couldn’t downvote you twice or let me try again.

Why waste £6m now when we could get him free in the summer if we really want him? There’s hardly a pressing need with AMN offering able back up to Hector.

Aren’t we equally as short at left back?

I’ve seen both previous saints bosses deploy him at left back at times especially when facing a team with a quality left footed right winger as is the modern way. To stop the cut in and shot threat. Plus he’s decent one on one and is good attacking from wide positions.
Probably just his agent trying to get him a new contract.

Bellerin has returned well and Maitland Niles has been good under Arteta. The 3rd choice RB slot should be for an U23 player. This seems like a bit of a waste.

If we are to sign a right back it should be for one who goes straight into the starting xi, not just a squad option

I think people here are maybe making the assumption that Arteta definitely sees AMN as a right back in the long term. Instead he might go on to be the midfielder/winger we expected when he first broke into the first team and obviously that would leave us with one specialist right back. It’s definitely not our biggest priority but I can see the logic.

The question to ask is, is Raul buddies with his agent?
If yes, better subtract a few poos.

I think our defence needs St Jude to salvage it.

We have Bellerin back. AMN IS in his natural position and doing decent too. He’s been playing Rback for 3 seasons now and he had a stint at Lback… wake up media pundits.

Saka has deputised well.Come next season he will be pushed into his NATURAL POSITIOn on the wings.

Kolasinac has been excellent plus we have Tierney.

You’re the gossip monger, A La Mahrez and Can zzzzzzzzz

Thank you. Always Shoving Mahrez and Can down our throats and a whole lot of other asinine commentaries, the latest being on how Pepe is not a good fit for us.

Whenever possible, based on our crappy budget, we should buy players who play in the premier league. They are already used to the tempo, style, and they adapted to life in England.

May need a Cback but it would be a desperation signing more than anythingelse. Mari is not ideal. Currently Sokratis is back, Luiz returns to fold in a couple of games, nothing wrong with Holding (aside from he needs to track his runners) Then there is Mustafi maybe out injured but he’s made of Neanderthal. More likely than not available. Next season there is also Saliba and Mavropanos to consider even if Mustafi and Luiz are (should be) moved on. So watching brief. Unless there is a further injury, I think it would be a bit of a panic buy… Read more »

What we should be doing is getting in a CM/DM. Even with Granit-Torreira vastly improved under Arteta, we are an injury or suspension away from problems. Guendouzi also will improve and we have Willock or cCeballos to consider. Looks like Joe is being groomed higher up the pitch. Ceballos is 50-50 on a stay. Ozil will be into last season (2021 expiry) so maybe moved if not we need to move on from him. he is a good asset to have but a 50-60 min player. In any case Ceballos not tried in deep midfield under Arteta may not have… Read more »

OMG.Emre Can.Will it ever stop.

Thanks for the poos Blogs.

He used to be a 6/10 player. Not the sort of player that will light the world on fire but the ”consistentish” defender that you know what you can expect from him. Use him as a backup? Sure as long as AMN wants to be used in midfield full time next season.

I hope this isn’t another stat dna originated brainfart again.

Buying players in positions with maximum hidden value etc etc. That is NOT how to build a squad.

Look at players who fit the system and balance of the squad first.

If he can cover LB too then I back it.