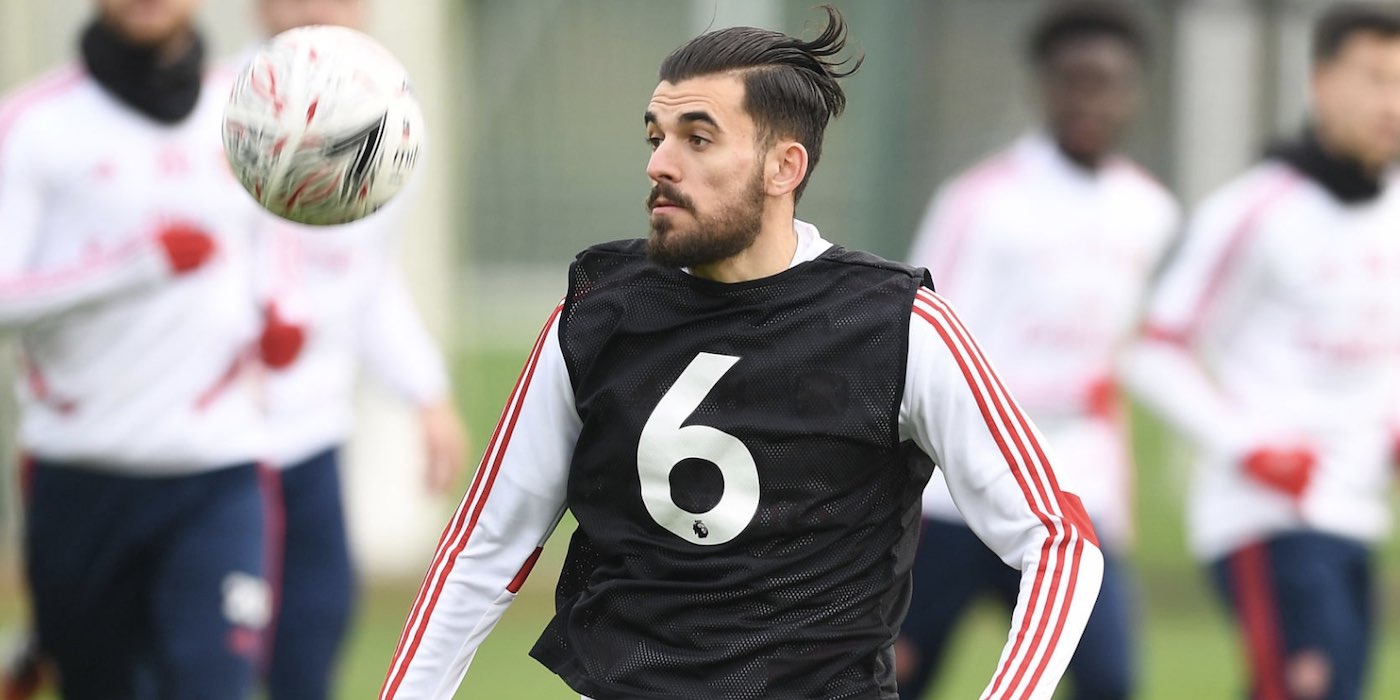 Arsenal take on Bournemouth in the FA Cup 4th round tomorrow, looking to make progress in a competition we’ve won a record number of times.

The latest training pictures show Sokratis involved, having missed the last two games through illness. His place was filled by Shkodran Mustafi, but his error against Chelsea led to the sending off of David Luiz.

Also in full training was Dani Ceballos, who was questioning his Arsenal future last week, amid reports he wanted to leave before the end of the transfer window to guarantee more playing time ahead of Euro 2020.

Gunners boss Mikel Arteta basically told the on-loan Real Madrid man to get his head down and work harder to compete for a place in the team.

Speaking on Friday, he said, “He needs to get back to fitness, fight for his place like in any other team.

“After that I’ll make the selection that I think is fair with what I see on the pitch.”

With the FA Cup not simply a trophy to fight for, but also a guarantee of a Europa League place for the winner, it’s a competition that Arteta is taking seriously.

Arsenal have plenty of Premier League points still to play for this season, but given how far we have to climb in the table, every avenue to European football next year has to be taken seriously.

It’s why there’s likely to be some rotation, but not quite as much as people might expect.

Arteta eager for FA Cup success as a manager

I think I got Mikel Arteta on the phone when I called Virgin media last week.

I rang up to cancel my contract and now I have a digital tv box in the post and I’ve recommended Virgin to my neighbours as part of their refer a friend offer.

I think the FA Cup is a distraction. We’re not good enough to fight on three fronts and think we should prioritise the league and the Europa League. When I say the league, I mean not to slide any further down and into a relegation dogfight. This season has been absolutely awful, 6 wins from 24. 18 points behind Leicester City. If we lose to Burnley next we could end up in 14th place. I know there are no easy games in the Premier League, but we’re proving to be a lower half team with a squad that should be… Read more »

Nah, the FA Cup is another route into Europe, we’re in no position to take that for granted.

What’s the problem? We had our last game almost a week ago, have a game tomorrow and then the next game on next Sunday. Why should it not be possible to fully focus on all of those games? There doesn’t even need to be rotation with this kind of schedule, at least not for general fitness reasons.

I would rather completely miss out on the Europa league than have to play in it again next year.

I would go full out for Europa league this year to get qualification for champions league.

Ideally, yes! But you know, life comes at you fast.
I believe a man like Arteta will be most serious with the Europa League. We all know winning that competition will do a lot for us. That said, you only play what’s in front first. Also, building momentum can’t be understated and the earlier we get into the habit of winning the better.

Ceballos, like to see him in action under Arteta. We will need rotation in the midfield either with Ozil who only last 50-60minutes or in deep end with Granit-Torreira.

Where Cebellos fits in will depend. Either of Guendouzi or Ceballos can be deployed higher up in lieu of Ozil or to rotate through the deep midfield duo.

Work in progress. If we don’t get anyone in and Ceballos can’t engineer a move, then may as well start to work on him. Could still be a very useful asset to end of season.

Santori is an Italian surname derived from Latin name Santorus (festum Omnium Sanctorum). It is loosely defined as ‘One who made saintly images’. Globally, Approximately 5,645 people bear this surname.

Off topic but I thought The Arsenal Gent’s post was excellent.

Green is not a good look?

Where have the thumbs gone!?
Did I miss a memo??

We can’t see your comments until you’ve logged in mate. It just says *Don Cazorleone is not logged in*

Can’t vote till you log in. No clue as to how that is achieved is my problem!

Where have all the thumbs gone? There’s not long left in the transfer window to get some in.

Thumb up for “where have the thumbs gone?”

Thumb down for “it’s ok my thumbs are working”?

Tomorrow’s game is actually very important for us. First, after the excellent performance at Stamford Bridge last week we need to keep the momentum going; and second, we should be taking the FA Cup very seriously because it’s a possible route back into Europe for next season. We are very much a mid-table team right now: we’re too good to go down but not good enough to finish in the top for or five. That’s why the FA Cup and Europa League competitions are the most interesting for the club right now. Back in the mid-1980s another former Arsenal player… Read more »

I think we can be top 4 next season.

Nobody is too good to go down. Not even Liverpool if it turns out that they’ve been doping.

Only other changes might be Ainsley at LB but like to see Saka and Gabi continue their Cole-Pires duo.
Put in Guendouzi just on back of how well he showed v chavs. I’d like to put Gabi up top but laca needs a goal and hopefully smash it tomo

Think AMN will play RB to rest Bellerin as he’s just back from injury. Could also see Ceballos in where you have Guendouzi?

Sokratis has got to start. If he doesn’t, we’re in danger of going out. I shouldn’t have to explain why, so I won’t. 😉

What’s up with this odd green colour??

Great to see Ceballos and Sokratis back in action.﻿

I’ll go with young Martinelli, thanks 🙂

I hope Cellabos starts tonight.
I love this new comment section. Keep it up, blogs.

There you go. I’ve started you off with a positive reaction.