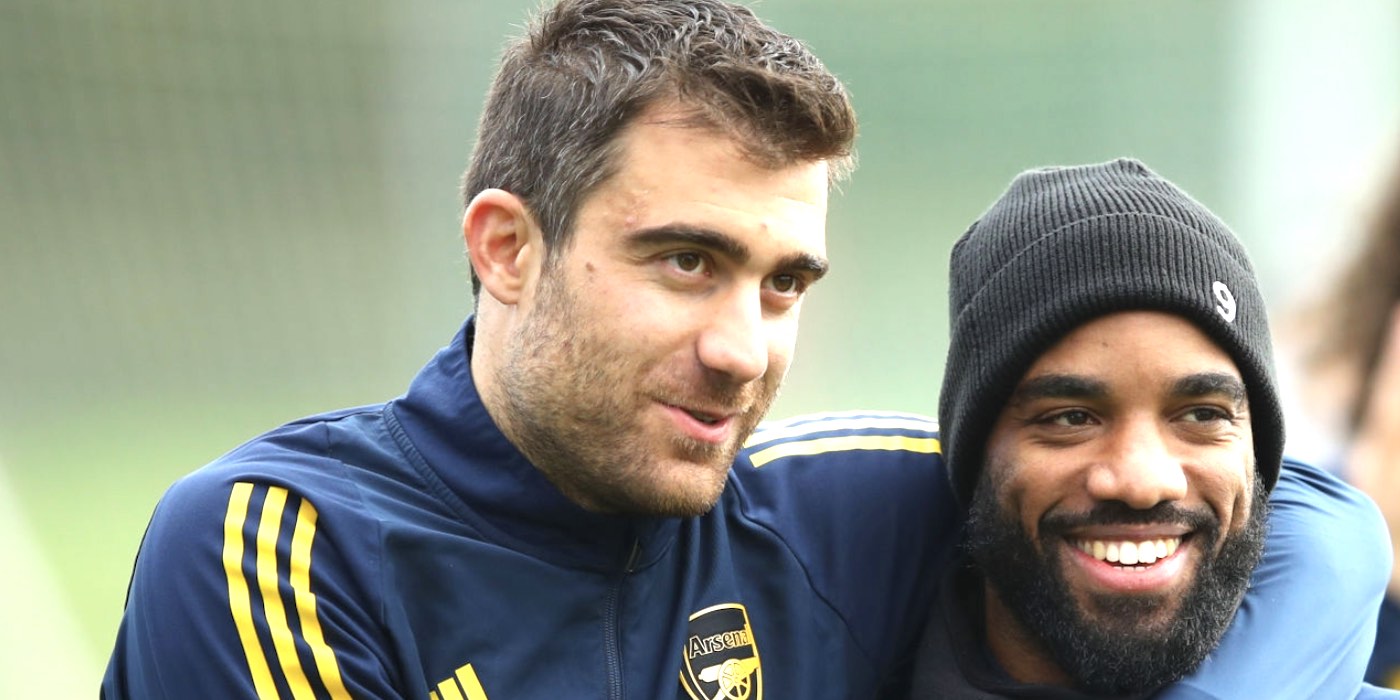 With Pierre-Emerick Aubameyang suspended for Arsenal’s next three games, the weight of goalscoring responsibility will fall on his mate Alexandre Lacazette.

Unfortunately, the Frenchman is struggling in front of goal right now, and hasn’t scored in the Premier League since December 5th when he bagged one against Brighton in a game we ended up losing.

It has led to worries about how we’ll cope without the captain and leading goalscorer, but Sokratis believes that Laca will come good and find his shooting boots again.

“In some games, from the outside, you can’t see what he can do. Or maybe he is a little bit struggling. But we have see also how is the game and which guy he has behind him.

“I think he is a very good player, we are with. Him every time, he is with us and we will show all together in the future a lot of things.

“I think Laca is coming better and better. He’s very important, a massively important player for us.

“Altogether we have to improve, to step up and to show that the year is not finished and that we have to fight for this.”

Let’s hope he’s right because we need him to start scoring again ASAP.

For more on Laca, Auba, and where the goals will come from, check out the brand new Arsecast Extra

I agree. Lately I feel his first touch is poor and he can’t get a proper shot in. Lack of confidence ? Don’t know but he’s not in form atm. Let’s hope it changes.

He has been in the past. Maybe we need to use him differently.

Had you followed him when he played for Lyon? There was a year where he only had Messi and Ronaldo above in terms of goal scoring, I think.

That was painful to read, or maybe it’s this tiredness scrambling my ability to read properly.
Anyway, I believe Laca will come good again. A winner at the bridge would be nice.

He scores some wicked goals when he’s on form. Hasn’t been for some time though.

Sorry, but for all Lacazette’s hard work, he’s not a prolific striker, certainly not the way this team plays. We’re not creating many chances in games, usually relying on either individual skill or set plays. In fact most games, Laca seems to tackle more than shoot and is defending more than attacking. Its admirable of him, but it’s the way we play now. I think I think it’s down to a lack of ambition from wide areas or midfield. They either shunt in backwards or side to side. Look at the way City and Liverpool play, they take risks, they’re… Read more »

Quick. Somebody stick 50p in the goal machine.

Just rumours but I read Athletico Madrid want to swap Lemar for Lacazette.
Lacazette works hard but I would rather have a striker score goals than simply to work hard.
And an endorsement from one half of the notorious “papabob” duo is probably not much good for his confidence….

Current incumbent player of the year, 19 goals last year (as second striker, Auba being first), a bit of bad form means he deserves no respect?

I’m not surprised, Lemar has been horrendous for them. I’d like to swap Mustafi for VvD but doesn’t mean a huge amount.

Just stick it in the back of the net Laca. You fucking beast.

He is not a goal machine at the moment bless him. I would play gabi alongside laca against Chelsea, he is young, energetic, has no fear and with some good crosses has a twathammer of a bullet header 😉

Ref was ridiculous. No consistency.

Ayew was kicking Torreira for fun. No card.

Aubameyang mistimed his tackle. It was a nasty one but no malice and the Ref could have let it go (had he been given lattitude to make his own decision with a replay…why can’t the PL afford 2 screens both halves on each side of the pitch? Ridiculous.

Meanwhile Tomkins slid in two footed uncontrolled on Martinelli and gets away with it.

and we are denied our top goal poacher. Absolutely shocking.

Laca has been strong for us. He’s the only player that can bully and jostle in that central area, make things happen in tight confines. With Auba, he gets more goals but you have to play him in with some space and to his feet. Laca can hold and control or fight for high balls which Auba can’t. Different players and BOTH needed. In absence of Auba, I’d pick Martinelli. he’s been bright and enterprising, has excellent control, has shown he has a nose for where the goal is. Off ball commitment also fantastic. I don’t agree with Edu coming… Read more »

Hope he calms his mind and finds his touch again!
Maybe Arsenal need to start doing yoga.
I know I need to after watching some games…

Wishing that we get some cohesion in the back line and continue to play with more grit! I think Arteta is making us tougher mentally. I’m happy he is in charge!