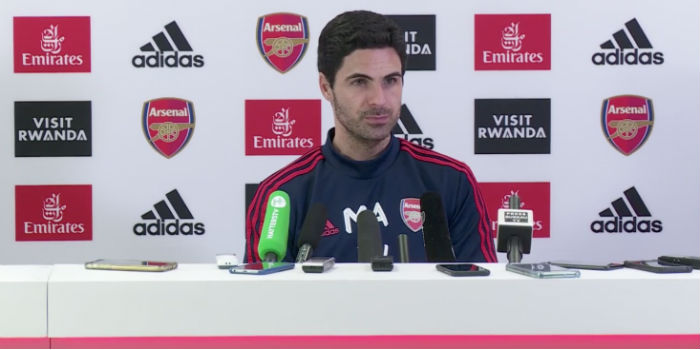 Mikel Arteta says Arsenal’s winter break in Dubai was akin to a pre-season getaway and included an audit the team’s progress in the last six weeks.

Most of the first team squad took the opportunity to spend a few days relaxing on the beach before the boss and his coaching staff talked them through new ideas and how they might be implemented in the coming weeks.

All in all, the chance to spend time under one roof without the hassle of actual matches, proved very fruitful.

Facing the media ahead of Sunday’s game with Newcastle, Arteta said: “It was like a mini pre-season for us in Dubai. We had time to work on a lot of our principles, how we want to set up against different formations, relevant things we need to work on both on and off the ball.

“Apart from that it was great to be a little bit together, spend some time together and get to know the players, not just them but also the coaching staff and backroom staff. It was a very productive trip.

Asked about team morale, he added: “We are taking it day by day. to be fair the input, work ethic, commitment in training and games has been really good.

“They know how crucial the next three to four weeks is for our aims until the end of the season. They are very aware of that and have a very good mindset towards that. I think they are highly motivated.”

Reflecting in more depth about the work the team undertook in the Middle East, Arteta said: “I wanted to give them a few days rest as they’ve been through a lot of things in the last few months.

“After that we reflected on what we’ve done together in the last five, six weeks since I joined; the things we improved – and they are very positive and we have to maintain – and the things we have to improve and develop.

“That worked really well, we agreed and set some targets and we started to work on them. Hopefully, we can see the outcome in the next few weeks.”

Still not sure they had to go to Dubai to achieve it, but let’s see if they can convert draws into wins. WIll be happy if so!

Incidentally, can we now use the Y word for Sp*rs fans? It is in the Oxford English Dictionary: https://www.bbc.co.uk/news/uk-51479810

Yeah, why leave the uk? Only storm Ciara, Dennis and subzero temperatures to contend with. If they wanted sand and sea they could’ve gone to Scarborough. Sissies.

To be honest, I only ever knew the word to mean Spurs fan, my best mate was one (a fan) at school and it’s only in the past couple of years I learned it meant anything else.

Yid is the Yiddish word for Jew and as such it should be in the dictionary, as are many other frequently used Yiddish words
in the English language. However it’s use by anti-semites has transformed its meaning and effect on Jewish people like myself. You shouldn’t use it to describe Spurs fans as you risk inadvertently causing offence to Jewish people. Now that you know that if you did use it then it wouldn’t be inadvertent, it’s just be racism.

Were a a big family, let’s act like it.

What this man said ?

I understand, it is very rude to link any group, whether religious, racial, winners etc to Sp*rs.

I hear it gets rather warm there.

Just like the first press conferance every word makes sense. I have so much belief in Mikel. Things just feels right. But the waiting time for draws to turn into wins seems long…I hope Dani Ceballos starts on Sunday and finds his way. He is the player in the squad I feel we are missing(Starts for Spain) and would love to see him blossom and a transfer fee will get fixed for the summer. But would Real want him back if he shines?!? Difficult one…but I really belive he is key from now and to the summer.

I just never think about him. If we knew he was going to become our player it would be so much different. I think Willock and Smith-Rowe ahead of Torreira could work. I really miss Aaron Ramsey’s runs from mid-field. Some random thoughts on Valentine’s day.

I worry that Arteta’s constructing rod for his own back. All these good news stories will essentially make it much harder to hide if results don’t start improving.

I know we can’t count on anything with this Arsenal team but our next 9 matches (2 in Europa) are very winnable which could put us in a decent fight for the CL spot.

Arsenal talk like they have actually won the league. The lads have gone on holiday and that’s all.
Lets see if this was a distraction or a success at the end of the season.
If we win our next 6 games then it was fruitful. Anything less than that and the boys were enjoying too much Shisha in Dubai.