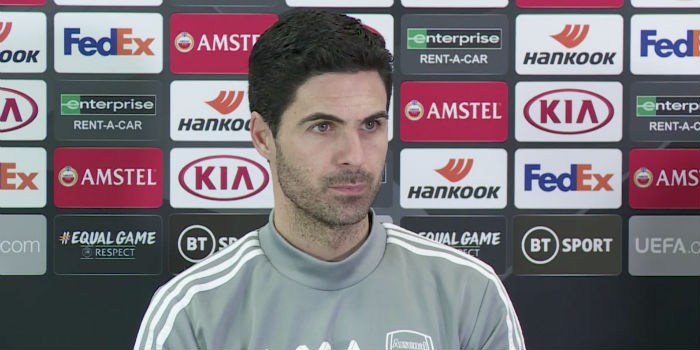 Mikel Arteta says Arsenal still have room for improvement but he’s pleased the energy around the club, including the support his players are receiving from the crowd.

Arsenal are unbeaten in 2020 and stretched their unbeaten run to 10 games on Sunday with a 3-2 win over Everton; a third consecutive victory inside seven days.

While we’re still languishing in ninth in the Premier League table, the gap on those above has closed and there is a growing belief that Champions League qualification is a possibility, whether it comes via domestic performances or a run in the Europa League.

“A lot of things have happened in two months, in many different areas of the club,” he told his pre-Olympiacos press conference.

“I think the team is progressing well, the club is looking in a better place, I think we’re getting much more unity in sections of the club and as well a great energy from the fans every time we play at the Emirates and away from the Emirates.

“There are a lot of positive things, but still a lot of things to do, to improve individually and collectively. We’re in that process at the moment.”

Arsenal are fighting for Champions League qualification on two fronts, via the Europa League and a top-four/five finish in the Premier League, and are also competing for silverware in the FA Cup.

With games coming thick and fast, team rotation will grow in importance. For the time being, Arteta is just trying to take things one game at a time.

Explaining his thinking, the boss said: “Team selection is based on what I see in training, the load of the players and what we want to do against the opponent.

“We have three different routes to qualify for Europe, we have to try to maximise the three of them. We go game by game. It’s the only thing we can do at the moment.

“We need to win a lot of games and to put a very consistent run together. We’ve just won two games [in a row in the league], but it’s not enough.”

The Gunners take on Olympiacos tomorrow night with a 1-0 advantage from the first-leg; a result built on a positive performance after a sticky opening period.

“I was very pleased with the performance in general, apart from the first 10 minutes when we had some issues to control things defensively in the final third some situations,” reflected Arteta.

“As well, when we gave the ball away in difficult areas when we could progress our play and become dangerous. Aside from that the team played with a lot of personality in a very difficult stadium against a good opponent with a great record in their own stadium and we managed to score and win the game.”

What’s the 3rd route to Europe?

i was thinking the same thing?

The winners of the FA cup qualify for Europa League

Wow, how did you find that out Martin? You must be so smart. Did you watch an Arsenal game this season?

I was there on Sundsy and the crowd were great. Even going behind so early.

I hope the stay-away fans start coming back to home games for the final 3 months of the season. Disappointing to see so many empty seats against Newcastle and Everton.

Was the Newcastle game not empty because of the storm?

Yeah watching from italy I was confused about that, thought there was trouble getting into the stadium at first

By my reckoning we have a minimum of 13 games or a maximum of 23 left to go (that’s league, Europa and FA cup). If we get a few kind draws in the cup competitions that’d help, but I am most keen on us getting the Europa League title – a cup and CL football in Arteta’s first season (or half a season) in charge would be awesome