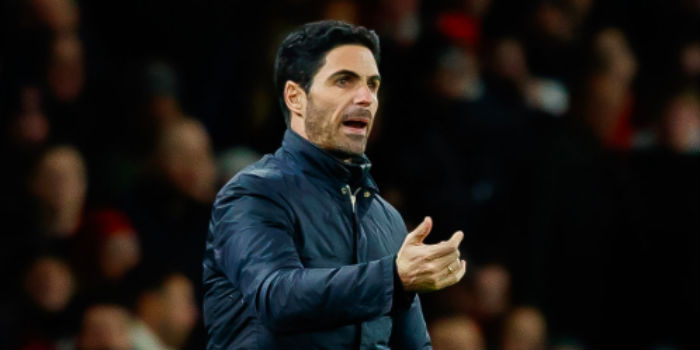 Mikel Arteta says his players are still down after Thursday’s shock Europa League exit to Olympiacos.

The Gunners were favourites to qualify for the last 16 having secured a 1-0 win in Athens but despite fielding a near full-strength side we flopped out as the Greeks snatched a late 2-1 to put us out on away goals.

Given the competition represented our best chance of getting back into the Champions League, the long-term ramifications of defeat will likely be serious.

In the short-term, Arteta needs to get his players focused on Monday’s FA Cup clash at Portsmouth.

“We are all very down, frustrated, disappointed, but my message to them was that I am right behind them,” he told his pre-game press conference.

“I thanked them for the effort they put into the game, for the attitude and the personality they played with and the way they reacted after we conceded the goal.

“We tried, tried and tried again and completely deserved to win the game but there were aspects of the game that we have to dominate better if we want to keep competing at that level.”

One element of Thursday’s performance that particularly stuck in the craw was our slow start to the game. Seemingly paralysed by our first-leg lead we seemed reluctant to go for the jugular when a proactive performance might have broken the spirit of the visitors.

“The first 15 minutes I wasn’t happy with the ball speed,” said Arteta, “everything was a little too safe, too slow.

“We played in the opposition’s half for 65 minutes or 70 minutes I think, but we found a way to score the goal and then the game management is another aspect we have to improve a lot. We have a lot of young players, but we have to learn quickly.”

Asked how he plans to lift the spirits of his players, he went on: “It is part of the profession. We can fall and have disappointments, it is about how we react individually and collectively.

“Then my job is to try to convince them that in the process in which we are at the moment, there are a lot of positive things and as well things we have to improve if we want to much better as a team. So, that is the way.”

Bitterly disappointing and utterly demoralizing. Gutted for the team and Arteta.

Absolutely. I do hope the fans away in Portsmouth and at home against West Ham can muster an incredible reception and ovation to lift the team up and remind them that when everything else is lost, we still have our pride and that badge for which to play.

﻿”looking forward to next season©”

Me too. If Man City win the League Cup tomorrow, that will open up another Premier League position to Europa League Qualification.

Still plenty to play for this season.

Finding it hilarious how everyone is getting on Lacazette’s back & asking for him to be sold & yet a player has been far worse is still protected by his social media fan base.

The sooner Mesut Ozil is out of our club the better. Can’t have passengers nowadays.

Actually both should be out the door

Finding it hilarious how everyone is excusing Laca and Pepe each time they fail to have an impact and to deserve their enormous transfer and wages. Andyet another player is still attacked by the same fanbase for all the sins of the team play. The sooner we get real fans, the better for the club and the players.

At Real, Ancelloti wanted Ozil gone because of his attitude. He came to Arsenal and said he was going to prove them wrong. Here we are discussing about his level of commitment again.

Well he did prove them wrong. Was the most creative player in the Premier League in his early years and helped us win 3 FA Cups. On recent form he is certainly not showing a lack of commitment

Did you watch the game Martin? When was the last time you watched any Arsenal games? Or highlights?

I certainly don’t defend Pepe, he has been poor for us so far, beggars belief that we could have had the better player Ziyech at half the price!!

a clear out is required, hopefully Arteta has the balls for it

Whats the point of getting on Lacazettes back? He’s in quite easily the worst form of his career and whatever is wrong with him I won’t pretend this is his “level”. He was our player of the season last campaign despite Auba taking the golden boot. It’s a lot like the Giroud scenario for me, I don’t necessarily want him gone, but it’s obvious we need another option who brings different qualities to the table. If if comes down to being one or the other then Probably it may be a good idea to sell him and reinvest the money… Read more »

On current form Ozil has been far more effective. Generally has been playing well but always the eternal scapegoat

Has been far more effective than what or when? 15MIL a year to turn up every now and then mainly when the game is already won.

When the game began. Auba linked up smoothly with Laca and we got a corner in 35 seconds. With full respect to Olympiakos because they played with heart and their fans were raucous, we could’ve buried the game in 10-15 minutes. I know Mikel will protect the players as they are frustrated at the loss but that was a strong lineup and I’m pretty sure they got the hairdryer for the complacency. Regardless of this we must try to ignore all outside comments, give a break to social media “we are a team”, “Arteta is the truth” from the players… Read more »

And blogs seriously, I try to post on an article every couple of days and I get “awaiting approval”… Been around here for a long time

Perhaps they should have tried harder. Its so easy to make excuses for it but the root cause of Arsenal’s problems is that they are simply not good enough. Their ambitions are unrealistic. They are good enough for a mid table finish and that is where they will finish. They need to completely rebuild the defence and midfield and by the time they have done half of that they will need to think about the forwards – well Aubameyang at least. While you have Luiz, Mustafi, Sokratis, Kolasinac, Chambers, Xhaka, Ozil, Elneny and Mkhitaryan you will never win anything. They… Read more »

Luther
Reply to  Me2

I think you’ll find those players you mentioned, have between them, won F.A. Cups, league titles, Champions’ League, Europa League, and the World Cup.
Is it really too much to ask for you to think BEFORE giving an opinion?!

Vonnie
Reply to  Me2

Which team do you support Me2? You always refer to them and their, never we or our, so who are your team and why are you on an Arsenal blog?

I think my dejection was more so to do with the way we lost as that we lost. After a few days of crying and yelling at clouds I feel I’ve compartmentalised it. We weren’t likely to win the competition this year, there’s a lot of good teams in it looking better than we are. It seems increasingly obvious to me that the issue was we had a lot of tired players who simply didn’t have that extra quality to get the result. If we can use the weeks rest we’ll have between games now effectively, we have every chance… Read more »

Problem is you just know with this team there will a more blips on the horizon & then Bellerin will come out & talk about the team character & how we need to focus on the next game.

I am going to try and be optimistic. Bear with me. I think we were always long shots for this tournament this year. There were 4 more rounds of increasing difficulty if we had got through. Example – Olympiakos are now facing Wolves. In a way its better to get knocked out now than to have the Thursday Sunday routine ruin our league performances as happened last year. As long as Man City are banned we have a better chance of making Champions League through 5th place. Partly because the teams around us are still in either Europa or Champions… Read more »

I like Arsenal fans for their optimism.
Even when the results and league table prove otherwise they still talk of Arsenal as a challenger and “huge” club.
May be after a few years of rebuilding and changing the mindset of the club that will hopefully be the case.
Arteta has made changes lets hope he gets the time and financial support that is needed…

This game, like a few others over the last 20 years, will stick with me for a long time. Here is another case of the Arsenal, by all accounts, being the better team but still losing. I thought we were out coached, and played right into the Greek’s hands by not vigorously going for another goal from the start of the game. We played right into their hands, as they played like a team that had nothing to lose, while we had heaviness on every touch. We did not make the necessary changes quickly enough to change the energy. We… Read more »

On the plus side, Invincibles still uncahallenged.

Arsenal need to erect a statue of Deeney’s big old bollocks at the stadium. Watford boys did the business today for us (wouldn’t trust us to do it ourselves)

Would have been THE real slap in the face if Liverpool had matched us. Zero confidence lads would do their illustrious predecessors justice.

We have 6 weeks of comparatively easier fixtures in the Premier League to regain confidence and sort ourselves out before we face Wolves, Leicester, Sp*rs and Liverpool one after the other at the end of the season. We need to take some momentum into that sequence as a team, not just Auba.

If Arteta wanted to put out a full strength team, he should have included Nketiah instead of Lacazette.
The faster Lacazette and Ozil get out of our club, the better

I dont know why you give an agley comment about mesut ozil he is still our best play maker he is tring to do his best in the pitch if you want to know arsenals major problem is in attacking side.