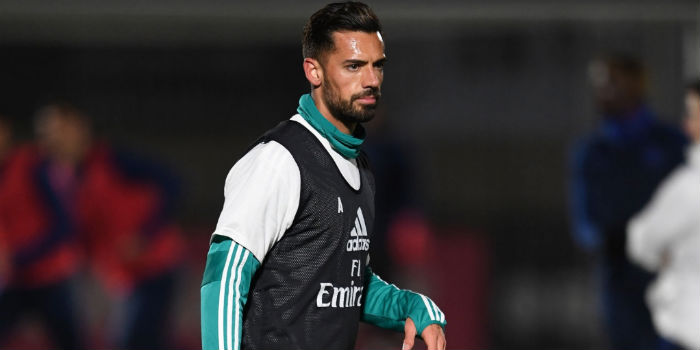 Steve Bould played up the chance to field Pablo Mari and Rob Holding alongside the club’s Academy stars as the defensive duo completed 45 minutes of Arsenal under-23’s 2-1 defeat to Chelsea at Meadow Lane.

For Pablo, the game represented a chance to build fitness following his loan move from Flamengo. Having fallen down the centre-back pecking order after his ACL injury, the minutes were also vital to Holding who is keen to re-establish himself under Mikel Arteta.

Bould believes the pair benefited from being up against a decent Blues outfit who are currently top of Premier League 2.

“It’s fabulous for the young players to play alongside them,” he told Arsenal.com.

“It’s a learning programme and we don’t very often get older boys and men playing with us, and that’s how I learned my game when I was a kid so it’s something we miss out on lots of times.

He added: “It was actually a very good game for them to come in to. I think Chelsea’s striker is a good player and they have good players all over the park so it was a good test for them and a good 45 minutes.

“I’m sure they will go on and use that for first team value.”

Folarin Balogun gave the Gunners the lead only for Armando Broja and Billy Gilmour to strike back before the break.

With so many youngsters used by the first team recently, Bould’s side have struggled at times thisd season, however, he was pleased with the performance last night.

“I thought the performance was really really good, especially in the second half,” he reflected.

“I think they edged the first half they had a bit more of the ball and we struggled a little bit to retain it.

“In the second half, the boys have done everything that we’ve asked of them and I couldn’t ask of any more from them apart from scoring another goal.

“It was very pleasing and I think the nice thing was that in the second half we had to take the two first-team boys off and it was a big ask for the two lads to replace them but we upped the game a little bit.”

The current generation of Nelson, Saka, Willock, Smith-Rowe, Nketiah, Niles, all have the potential to have big careers, either here, or generating us some funds and playing elsewhere.

Hopefully our conveyor belt doesn’t come to a halt, with the current prices of players, we’ll need to produce even more of our own players over the coming years.

They were em-Bouldened to play with the lads.

Have to wonder what’s going on with Holding’s progression. There’s no real injury issue. Also Sokratis. He’s been dropped in favour of Mustafi-Luiz for 3 matches now. We have way too many Cbacks as is and we will have to cull. Saliba likely to come in considering how much we spent on him. Calls into question Mavropanos who is already 23yrs. Then there is a Mari. Loan deal suggest we are just hedging our bets on injury but if he gets a chance and performs, maybe second thoughts otherwise just a temporary thing (Ditto Cedric ala Debuchy) The whole management… Read more »

No one on Saliba watch.

Since he isn’t Mustafi, some people prefer to stay mum.

We have been mucking around buying players.

72m for Pepe to me still a folly. BUT then 27m for Saliba. 99m committed with repercussions.