THE LOWDOWN
Arsenal play Chelsea in the Conti Cup Final on Saturday evening at Nottingham Forest’s City Ground in pursuit of their first silverware of the season and the trophy they have won five times already. In fact, since the League Cup was rebranded as the Conti Cup in 2011, Arsenal have appeared in all but one final.

Joe Montemurro’s side have not beaten Chelsea since a 5-0 drubbing at Kinsgsmeadow in October 2018, in fact, they have lost all four meetings since. Their last encounter, in January, proved to be a disaster as Chelsea ran out 4-1 winners with three goals in the opening 20 minutes killing the tie. Joe Montemurro dropped Lisa Evans and Beth Mead to the bench that day in an effort to flood the centre of the pitch, he flatly admitted that his game plan was wrong in the aftermath of the match.

With the Continental Tyres League Cup Final around the corner, let’s take a look at the road to the final with @JordanNobbs8 and @MagdaEricsson ??
#ContiCup @ContiUK pic.twitter.com/x150uHYlDK

It remains to be seen what Montemurro’s approach will be this time, but I would wager it won’t be such an unfamiliar one. In any case, the injury situation is such that there is little room for tweaking the personnel. Chelsea have yet to win the Conti Cup, the only domestic trophy that has evaded Emma Hayes as their manager, while the Gunners will be determined to prove that last month’s heavy defeat was a one-off.

Chelsea’s energetic counterpressing approach has proved to be a form of kryptonite for Arsenal’s possession style from the back. The match pits Matildas strike partnership Sam Kerr and Caitlin Foord against one another, it also showcases the WSL’s top goalscorers in the shape of Vivianne Miedema and Beth England. Don’t expect this one to be light on goalmouth action.

TEAM NEWS
Arsenal will be without Lia Wälti [hamstring], Beth Mead [knee] and Kim Little [foot] who have all been injured in February. They are added to an injury list that already includes Katrine Veje [foot] and Danielle Carter [knee]. If either Katie McCabe or Danielle van de Donk are booked, they will miss the North London derby against Spurs in the FA Cup on 15th March.

Working on that comeback ?️‍♀️

LAST TIME OUT
Emma Hayes’ side ran out 4-1 winners at Meadow Park in January, with goals in the opening 20 minutes from Beth England, Sam Kerr and Sophie Ingle. Guro Reiten added a fourth early in the second half before Beth Mead struck a late consolation. In October, Chelsea were 2-1 victors despite Danielle van de Donk giving Arsenal an early lead. Second half goals from Beth England and Maria Thorisdottir turned that game around.

The last time the teams met in a cup final Chelsea won 3-1. A double from Ramona Bachmann put the Blues in control, Vivianne Miedema got one back at Wembley before Fran Kirby restored the two goal cushion. Arsenal and Chelsea haven’t met in the Conti Cup since August 2015, the Gunners were 2-0 winners at Staines Town thanks to two goals from Marta Corredera.

STATS AND TRIVIA
Arsenal have won the Conti Cup a record five times since its rebranding in 2011. They have won the League Cup [in all of its forms] 15 times, which is also a record in England.

Chelsea defender Anita Asante won the League Cup with Arsenal three times. She was also a member of Arsenal’s quadruple winning squad in 2006-07.

In the WSL this season, Arsenal have averaged 15 shots per game compared to Arsenal’s 20.33 [Statsbomb]

Chelsea average 1.67 counter-attack shots per game in the WSL, compared to Arsenal’s 0.60 [Statsbomb].

Arsenal’s shots are of a slightly better quality at 0.13XG per shot on average, compared to Chelsea’s 0.12 [Statsbomb]

PLAYER TO WATCH
“You could see when Jen Beattie came on that the ball just moved a little quicker and we were able to find the angle for the passes. She’s been a big miss for us.” So Joe Montemurro told me after the recent 3-2 victory over Liverpool in the WSL when Beattie was a second-half substitute after 8 weeks out with a calf injury.

Beattie’s ability to pass the ball quickly through the lines will be key in this game, Chelsea have been able to unsettle Arsenal with a high pressing approach in recent games and Beattie was a notable absentee when the Gunners fell to a 4-1 defeat in January. If Arsenal can break Chelsea’s lines under pressure when playing the ball from the back, they could expose Hayes’ side. 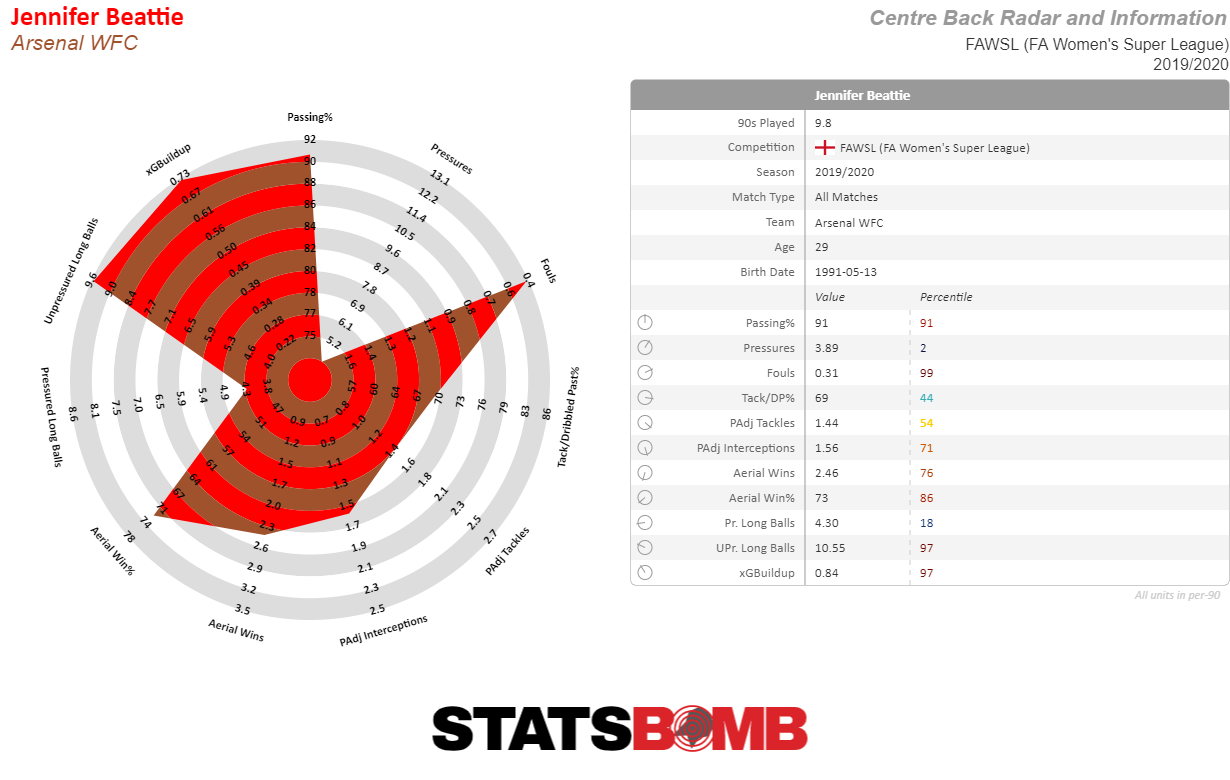 On the defensive front, how Beattie and her centre-back partner deal with the country’s in-form striker in Beth England and possibly Sam Kerr too will go a long way to determining whether Arsenal can win the tie. When Kerr and England play together, they are very adept at swapping positions, with one going outside to run the channels and the other dovetailing into the centre. Containing the movement of Chelsea’s frontline will be critical on Saturday.

THE OPPOSITION
Chelsea are one of the continent’s strongest teams, with attackers the calibre of Beth England, Sam Kerr and Guro Reiten and creative talent like Ji So Yun, one of the best defensive midfield players in the business in Sophie Ingle and a powerful defence, Chelsea are a dominant, powerful team with quality all over the pitch and on the substitutes’ bench.

‘This is unfinished business for us.’ @emmahayes1 with a special Q&A ahead of Saturday’s Conti Cup final against Arsenal! ?? pic.twitter.com/sT1cIpT6BR

Arsenal have found their counterpressing style difficult to cope with in recent encounters, with Chelsea winning the last four matches between these two sides. Throw in Arsenal’s injury woes, which will severely restrict their ability to alter the pattern of the game from the bench and Chelsea are favourites for this tie for a reason.

HOW TO CATCH THE GAME
The match kicks off at 5.30pm on Saturday at Nottingham Forest’s City Ground and will be shown live in the UK on BT Sport. Everywhere else, it will be available free of charge on the FA Player app.

COMING UP
On Friday night at 10.30pm UK, we will have an interview with manager Joe Montemurro and captain Jordan Nobbs looking ahead to this game. We will also have exclusive player reaction from the match on the site on Saturday evening. The next episode of the Arsenal Women Arsecast will go out in early March. Also, don’t forget to check out yesterday’s piece on Arsenal’s road to the Conti Cup Final.

Challenging yes, but why not?
COYG!

Tough challenge with the injuries–but absolutely doable! I’d like to see the
Gunners counter-attack more when they win the ball in midfield.