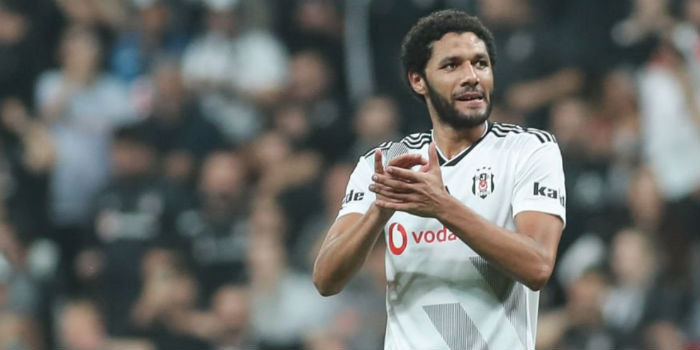 Mohamed Elneny says he’s open to a permanent move to Besiktas at the end of his current loan deal, however, the chances of that seem slim.

The Egypt international fell out of favour during Unai Emery’s tenure and was happy to make the move to Turkey when the Istanbul giants came calling in the summer.

After a red card on his debut, the midfielder has gone on to make 25 appearances this season for a Besiktas side that have underwhelmed both at home and in Europe.

They are currently seventh in the Super Lig table and were knocked out of the Europa League stages at the group stages. Along the way, they’ve also parted with a head coach and there were even reports that Elneny didn’t get paid for several months.

All the same, Elneny seems happy with his lot in Turkey.

“Before coming I thought there was going to be a huge difference [from the Premier League] but when I came I realized there’s not that big of a difference,” he told beIN SPORTS [translated by KingFut]

“There’s a lot of good players here, the league is quite tough and many teams compete for the title. All teams are strong and can beat one another.

“The atmosphere here is great, it’s an amazing feeling to play infront of our fans, their support doesn’t stop throughout the 90 minutes. I’m very happy to be part of the Besiktas family and who knows what the future holds.

“If the club is willing to pay my buyout clause I would be happy to stay if the situation allows it.”

We’re not sure what his buyout clause is, but we suspect it’s around the £15 million mark, which could be steep for a team that doesn’t have European football.

Partey out, Elneny back, Saka being assessed

Maybe it’s just me….. but don’t Elneny and Guendouzi seem like very similar players? Decent at a lot of things but not great at anything and run around a lot.

Elneny is better at shooting. His one touch passing is tidy.

Guendouzi’s composure is far much better.

With both I feel there is something better to be unlocked but guendouzi has more time in his hands.

Phil Dowd is a shit
Reply to  goonerrah

It’s just you. They are nothing alike

Diaminedave
Reply to  Phil Dowd is a shit

I’d say there is a roughly 99.4% genetic similarity!

Elneny is a ball recycler. Guendouzi rund a little more

I remember both bossing the midfield early days at arsenal under Unai. I think they’re both good passers of the ball Elneny has a shot on him. Guendouzi is yet to find his shooting boots and range. Elneny when given run of games can be irreplaceable at times I remember under Wenger he had a run of games where he was undropable. And he’s very mobile not that he has great speed but he has deceptive speed he’s faster than he looks just like ozil most people won’t categorize ozil as fast but he is one of our fastest midfielders.… Read more »

There are probably a host of clubs on the continent which could afford the reported 15m buyout clause for an international midfielder of his age. Sure, Elneny isn’t going to grab the headlines with his play, but he is a reliable performer and good at recycling possession.
He seems like a decent enough guy, so fair play to him if he ends up somewhere besides Arsenal after the season.

Decent enough player for us and it would have been interesting to see what Arteta could have gotten out of him. But 15 million quid ain’t bad either.

Well we got 10m for Coquelin and 10m for Bielek, so 15m for Elneny sounds right.

Coquelin is twice the player of Elneny

Even if that’s true, transfer fees are significantly higher now.

One of those guys who will never be a starter for us but was always a reliable enough squad player when called upon. While I’d probably take that £15m for him I certainly wouldn’t object to him returning to the club in the summer. Sidenote I didn’t realize he was only 25!

Whoops I read something wrong he’s 27.

Did it take 2 years to read the article or is that how ages work now?

For those wondering why he might be hard to sell can be also attributed to work permit issues. Unless some teams in europe wants him to take one of the Non-EU spot in their squad…

Why? He is French.

He’s Egyptian? Where did you get French from?

I wonder why I was down voted

15 Mil from him, 10 mil + for Miki’s 200k off the books, willock on loan, that would be my outgoings, that 200k can go towards AUB and LACA to sort them out. Elneny’s to sort Sakas contract and then personally it should have been the ajax guy gone to the scum but id like to see a number 10 to rival Ozil who i can imagine will be let go in 2021 when his contract is up and an athletic CM, tall powerful and aggressive with great energy and box to box ball player (look what Gueye is doing… Read more »

Noooo! Please no, have we not learned anything from Gnabry! Please don’t go

Oh what I would give for us to buy Houssem Aouar!

The true redemption arc would be Arteta bringing Elneny back from Turkey and moulding into an Arteta v2 midfield metronome.

Might be a stretch but heck these days who knows!

A Different George
Reply to  bob

I was thinking that too. Elneny’s limitations were that so many of his passes were safe, short, and/or sideways, and he tended to follow his pass (which is a very effective way of making sure the ball is not turned over). Very occasionally, seemingly on instruction, he played a much more progressive role–where he continued his run after passing. In those matches he was pretty effective, both more skillful and more intelligent (football intelligence, don’t know anything about him as a person) than I thought he was. So, there is the raw material there for something above a decent squad… Read more »

The Voice of the Noise
Reply to  Santori

Both galloping workhorses from the same stable, I get we are still looking to unearth a Vieira like stallion and I wouldn’t put these two down as horse shit but they are nieghh ver good enough for our club, how many times do we get saddled with also rans and show ponies..