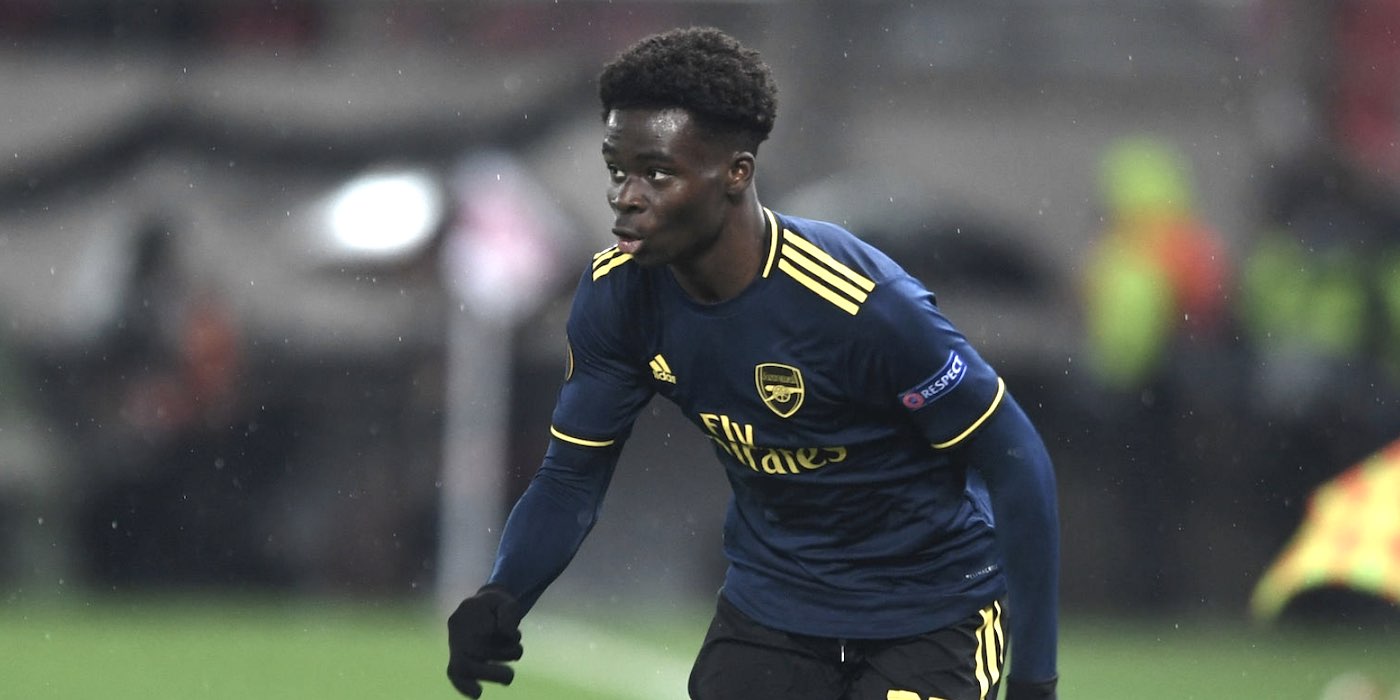 Bukayo Saka provided his 9th assist of the season last night, for Alexandre Lacazette’s match-wining goal in the 1-0 defeat of Olympiacos in the Europa League.

The 18 year old’s star is very much on the rise, after a breakthrough season in which he’s been one of our most impressive performers.

When a young player does what he’s been doing, questions about him are inevitable, and visions of the player he might become flash around in the minds of fans.

If we’re impressed, so too is Mikel Arteta, but not just because of what he’s producing on the pitch, but the way he’s handling himself off it too.

“He’s still as keen to meet with my assistant, willing to improve. He’s a great kid and he makes big decisions in the final third. He’s not someone who hides.

“He’s got the vision and the ability to execute when the spaces are really tight. That’s a gift.”

It will be interesting to see how we manage him as the season goes on, but for now let’s enjoy an Academy kid tearing it up for the Arsenal.

Such a prospect, lets hope he signs a new contract!

After Wilshere, this is the first academy graduate stirring hearts big time.
I sincerely hope that is where the comparison ends.

Such an exciting player. Can’t wait to see how he progresses in his preferred position.

Obviously Henry and Pires are the reason why everyone wants to play on the left side.

Or maybe they are just left footed lmao

Except Martinelli and Auba, of course.
Although they would probably prefer the center to be fair.

It is clear though that unless Nelson gets going we’re short on the right side behind Pepe. Martinelli and Auba just aren’t as strong there.

But then that’s a bit classic for Arsenal to have a strong bias to left sided attack.

Saka has got everything, losing him would be heartbreaking.

I used to look forward to going to games to watch Cazorla and Cesc, and loved watching Pires and Wright on the tv as a youngster.

Saka’s a player who’s got me excited for football again, we can’t lose him.

When he signs a new contract I’m getting his shirt!

It’s the Nigerian hunger in him. Our next bonding/winter break should be in Nigeria.

Amen; the most Nigerian thing?

Refusing to believe these stories from the media that contract discussions have stalled due to the prospect of no European football next season… No 18 year old making their name in the game should be that complacent and entitled to European football… He’s an incredible talent, very humble as described by Mikel and I hope we look after him and nurture his development, he will be a huge asset to us in the coming years. Sign that contract Bukayo and ignore the media tripe!

What I love about Arsenal and Arsenal fans is how much we want our homegrown lads to succeed. In an era of ever inflating prices, who doesn’t want to see a young Hale End graduate become one of our next superstars?

Best LB in the world.

Give him the no.7 and tie him down on a long term.

The most impressive thing about that assist is that it was quite clearly a pass, not just a low cross into a dangerous area (which wouldn’t have been bad). You can see him look up and see Lacazette’s run before he makes the pass. Last game, there was talk his assist was aimed for Mustafi, who was waiting in the box, and Pepe darted in front of Mustafi to take the shot (as he should, he’s a striker). But, when you watch closely, you can see that Saka sees Pepe’s run and gets his the ball at exactly the right… Read more »

the contract offer should include a Saka gold

We have several break out players this season which is pleasing. Saka definitely up there but also Martinelli and Willock in spurts has been decent too. The current defensive assignment born out of necessity for Saka actually a boon. It will improve his game considerably when eventually he is cycled into his natural position higher up (with kolasinac then Tierney returning) And we should be even stronger on left side thereafter with the two fullbacks returning. BUT as mentioned before, Gnabry learnt a valuable lesson going to Bayern and from Robbery/Ribben. They told him that they worked on their deficiencies… Read more »

No doubt he did surprise me with the speed of his improvement. Kudos Salary and keep improving for Arsenal.