THE LOWDOWN
Storm Ciara put paid to the entire WSL calendar at the weekend, but there isn’t much time to dwell for Joe Montemurro’s Gunners as they travel to Chester for an away match against struggling Liverpool. Indeed, this game was in some doubt until late last week when a pre-emptive move saw the fixture moved from Liverpool’s usual Prenton Park ground to Chester FC’s Deva Stadium.

Tranmere Rovers have played on the Prenton Park surface three times in seven days, so Liverpool took the decision to move this game before suffering a third home WSL postponement of the season. Their away match at Everton on Sunday, due to be played at Goodison Park, was also postponed.

Our @BarclaysFAWSL clash with Liverpool will now be played at the Deva Stadium, subject to broadcasting regulation approval ✅

The Reds are second bottom of the table with only goal difference keeping them out of the relegation place, but this is a trickier match for Arsenal than it sounds. Vicky Jepson’s side haven’t conceded more than one goal in a game since late October. The problem is that they haven’t scored more than once in a WSL game since last season. In 12 games, they have conceded only 13 and scored only four.

Arsenal need to get back on track following consecutive WSL defeats to Chelsea and Manchester City, defeats that have taken their title defence out of their hands. The extra time-off has allowed midfielders Kim Little and Lia Wälti a few more days to overcome injury niggles. Arsenal have underperformed on XG in five of their last 10 WSL games, they will need to be more clinical against a stubborn Liverpool side.

TEAM NEWS
Jill Roord misses out due to suspension after picking up her 5th booking of the season at Manchester City, Danielle van de Donk is one booking away from a suspension herself. Kim Little is out after undergoing surgery on a foot injury. Lia Wälti has not travelled with the squad after also missing the City game, so Leah Williamson is likely to come into midfield. Jennifer Beattie is fully fit again following two months out with a calf injury.

Katrine Veje [foot] and Danielle Carter [knee] are unavailable, as is Caitlin Foord who is on international duty with Australia. Arsenal’s U21s play on Wednesday, but Ruby Grant, Mel Filis and Ruby Mace are still expected to travel with the first team and be on the bench.

LAST TIME OUT
Arsenal were 1-0 winners at Meadow Park in November thanks to a first-half strike from Vivianne Miedema. In this fixture last season, the Gunners won more convincingly, a 5-1 away victory with goals from Kim Little, Beth Mead [2], Dominique Bloodworth and Vivianne Miedema.

Vivianne Miedema has not scored in her last four WSL games. She has never gone five league games without scoring.

Liverpool centre-half Sophie Bradley-Auckland averages 9.67 clearances per game, only Reading’s Sophie Howard [10.0] averages more in the WSL [Statsbomb]. Fellow defender Leighanne Robe has made more tackles [47] than any other player in the league [Statsbomb]

PLAYER TO WATCH
With Kim Little missing the last two games, Danielle van de Donk has returned to her favoured number 10 spot though, in truth, even when played from one of the wide-forward positions, she has total liberty to drift inside. Her attacking numbers are very good too- she is in the 98th percentile for shot value in the division. Daan is the player that triggers Arsenal’s press from the front, registering more ‘aggressive actions’ than any other player in the WSL. 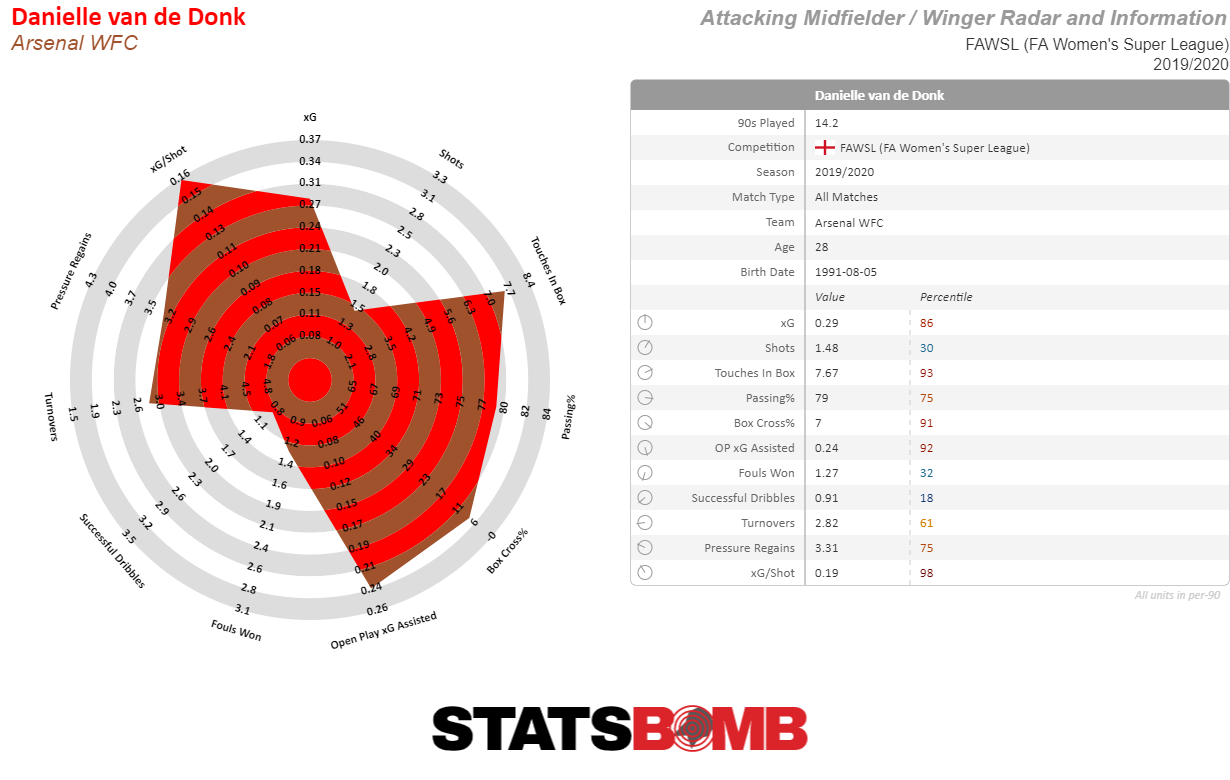 DvD has a good sense for when to play as a second striker to Miedema and, as her goal against City showed last week, she has a nose for close-range shots. Only Vivianne Miedema contributes more in terms of goals and assists. Van de Donk is also one booking away from a suspension and Thursday might be a good time for her to pick up a suspension with Championship side Lewes up next. Not that I am suggesting that Arsenal will deliberately game that situation, of course!

Take a l?k at @DanielleDonk's top ? #BarclaysFAWSL goals in an @ArsenalWFC shirt…

THE OPPOSITION
Liverpool are locked in a relegation battle with Bristol City, with both sides level on points at the foot of the WSL. The differences between the two clubs are reflected in the goal difference tallies, Bristol are on -29, with Liverpool on -9. 1-0 defeats have been the story of the season for Vicky Jepson’s side, who have undergone a fair amount of turmoil over the last 12 months.

Manager Neil Redfearn left after just one game last season, before caretaker manager Chris Kirkland said in an interview that he was buying furniture for the players before seeking reimbursement for the club. Liverpool do not train with their men’s team, instead using Tranmere Rovers’ Raby Vale. There are currently no public plans for Liverpool to share their new under renovation headquarters at Kirkby with the women’s team.

.@PeterMooreLFC has reassured fans the club is doing everything it can to alleviate the ongoing problems with the pitch at Prenton Park.https://t.co/9KAvs4GBrB

Having won the WSL in 2013 and 2014, Liverpool made the decision not to try to compete with Arsenal, Chelsea and Manchester City as the financial arms race between the top clubs continue and now, Vicky Jepson’s side fight relegation. They have some very experienced players in the likes of Niamh Fahey, Sophie Bradley Auckland, Melissa Lawley and Rachel Furness, who joined on loan in January.

The issues for Liverpool are simple, they defend in a deep block and frustrate their opposition, they have one of the most formidable defences in the division. Yet with only four goals in 12 league games, their attack simply has not been threatening enough, with Courtney Sweetman-Kirk and pacey wide forward Rinsola Babajide. However, they did beat their relegation rivals Bristol City [1-0, of course] last time out.

HOW TO CATCH THE GAME
The match kicks off at 7pm on Thursday evening at Chester FC’s Deva Stadium. The game will be shown live on BT Sport in the UK and free of charge on the FA Player app elsewhere in the world.

COMING UP
We will have exclusive post-match player reaction on the site on Thursday evening, as well as all the usual build-up and reaction for the FA Cup match against Lewes on Sunday. This month’s feature article will also focus on Danielle van de Donk.

To hang in with Chelski & the Manks 3 points needed tomorrow. Can’t see Brum or Bristol doing tonight what they did in same fixtures last year.

Need to breach that ‘Pool defence more than once also as goal difference is even more important after recent results and Chelski scoring for fun.