‘The More We Have The Ball, The More They Don’t Have It’ Joe Montemurro Previews Conti Cup Final

When Arsenal take on Chelsea in the Conti Cup Final on Saturday evening, the memory of last month’s chastening 4-1 home defeat against the same opposition will be fresh in their minds. On that occasion, Gunners boss Joe Montemurro had a plan to flood the middle of the pitch where Chelsea are very powerful.

The plan meant ceding wide areas and the Blues punished Arsenal for it by scoring two goals from crosses and killing the game inside the first twenty minutes. Montemurro was candid in his assessment of that game when I spoke to him after that game, “The thought was to press a little bit higher up the pitch and to stop them playing through the middle and create overloads in the middle of the park, it didn’t work and I take full responsibility.”

Arsenal have struggled with Chelsea’s counterpressing style in recent seasons, losing their last four fixtures against Emma Hayes’ side. When I press Joe on this on Monday, he admits that Chelsea’s physical power has proved difficult to deal with, “They are more direct, they are a team that obviously uses their power to go forward early and we just need to be smarter in the way we set ourselves up when we do lose the ball.”

However, the Australian thinks the best way to stop Chelsea is for Arsenal to concentrate on playing their own game- something they were perhaps guilty of not doing in the January defeat, “We don’t want to lose sight of what we try to do and the more we have the ball the more they don’t have it, and the more chances we’re going to create to go forward and score goals.”

Arsenal and Chelsea are familiar opponents by now, they have played one another in the last two FA Cup campaigns prior to this season and now face-off in a domestic final for the third time in four years. Montemurro says that familiarity can make preparing for these games more difficult, “I think it’s tricky, because sometimes the expectation and knowing the opposition, you might not approach it with the detail that you’d normally approach someone new.

“So it can become tricky, and I think it’s more difficult sometimes to play the same teams and the same scenarios over and over again. But we have to be prepared, we have to expect certain things and we have to make sure that we’re in the right mindset to play a team that we know well, we know who their players are, we know their strengths, we know their weaknesses, and we just have to make sure in that moment that we take care of the situation.”

The teams play in contrasting styles. Montemurro’s play is based on a probing, possession based game. They complete 84% of their passes on average in the WSL compared to Chelsea’s 79%. Arsenal also attempt two more dribbles (18.07) per game compared to Chelsea (16.07). However, Chelsea force turnovers and with Beth England upfront, will shoot on sight. They take five more shots (20.33) per game on average than the Gunners (15), but Arsenal have a slightly higher XG value (0.13) per shot than Hayes’ side (0.13). [These statistics were much further apart until recently, when Chelsea’s 8-0 win over West Ham skewed the figures somewhat]. 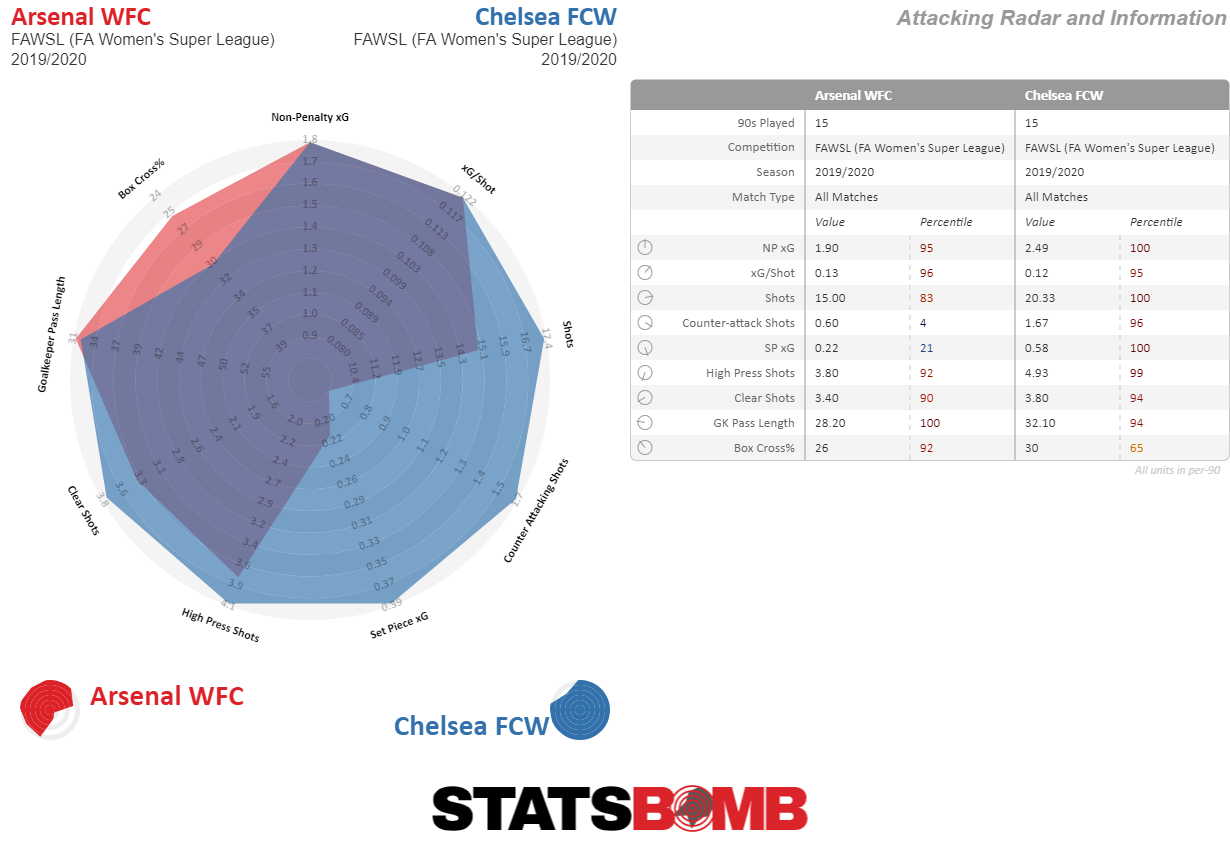 I ask Joe about Arsenal’s more considered, scalpel style of attacking, “I hate crosses for crossing’s sake. If it’s not on to cross and there’s no one in the box, then we start again and we try to probe and find the space. Look, sometimes is it important to get the ball in early because there might be an opportunity for a half-chance? Obviously, but we try to play the percentages, and the percentage of crossing the ball when there is a player in there to maybe put it in the back of the net is higher than crossing it when there’s no one there.”

The Gunners are wracked by injury again going into this game, with Kim Little, Beth Mead and Lia Walti joining long-term absentees Katrine Veje and Dan Carter on the sidelines. It was a similar situation in last year’s final against Manchester City when Vivianne Miedema was only fit enough to start from the bench and 17-year old Amelia Hazard played 60 of the 120 minutes.

Montemurro thinks Arsenal are in better shape this year, however, “We’re in a better state as regards the lead-up, we haven’t had as many games leading up to this game, so the reality is that we’ve probably managed it and prepared a little bit better in terms of load management, in terms of minutes, in terms of tactical and technical preparations. So a little bit different.

“Obviously, would I like more options off the bench? It wouldn’t be bad. But it is what it is and I’ve got 100% faith in the players that are out there and I’ll never say we’re not going to perform because x player’s out. That’s not right. The whole squad, the whole group that I’ve got here I trust them implicitly and believe in them.”

Arsenal will go into the game as slight underdogs on Saturday, the quality of the game plan and the execution of it will be absolutely critical if the Gunners are to break their recent hoodoo with Chelsea and bring the Conti Cup back home again.

With thanks to Molly Hudson from the Times.

Previous articleArsenal 1-2 Olympiacos: By the numbers
Next articleArteta: We’re down, frustrated and disappointed

Wait, so that’s how possession works?

For that picture, I thought you’d put Mustafi’s face onto Arteta’s body!

So Beattie has another knock/injury, apparently–not in the lineup and not on
the bench. Arsenal have two senior players on the bench today. I’ve never
seen a team with more injury problems over a two-year stretch. Absurd.