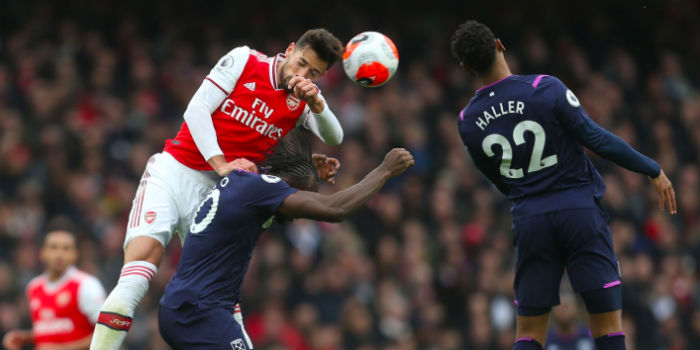 Mikel Arteta says he was impressed by Pablo Mari’s Premier League debut as the Spaniard collected a second clean sheet in quick succession to help Arsenal beat West Ham 1-0 at the Emirates.

The Spanish centre-back delivered a composed performance on Monday when we beat Portsmouth 2-0 in the FA Cup and was trusted with repeating the feat against the Hammers.

After a nervy start, he settled down nicely alongside David Luiz and was a noticeably vocal presence around his teammates.

Speaking to Arsenal.com, he said: “I think he was very good and in the first half he took a few moments to sort out what he needed to do.

“He’s brave, he’s willing, he’s impressive without the ball and he has a presence.

“He is very vocal around his team even if he’s only been two days here, but he has that ability and that character. I’m really pleased with him.”

Asked in his post-game press conference whether two clean sheets in a row means he’ll have to pick Pablo for Wednesday’s trip to Manchester City, Arteta joked:

“Good point, I have to take your advice there! If it is as simple as that, hopefully we do it again at Manchester City and see if we get a clean sheet!

“He is doing well, he’s adapted really well – it is not an easy league and a central defender, in my opinion, to play in the Premier League is one of the toughest positions to play for any foreign player.

“But he is very willing, he is learning and he has a good experience and understanding with his team-mates.”

I would have preferred our game against ManC to be later in the season rather than now when the title isn’t won yet. ManC don’t need these 3 points as much as we do. However, they would want to delay conceding the league title to Pool as much as possible.

Ofcourse, it would be tremendous if we manage the victory, it would be a huge confidence boost for the team, Arteta and staff.

Too Drunk To Be Offside
Reply to  Ayleym

This is totally off topic, but I would suggest that the arseblog site have a section for Arsenal’s upcoming fixtures list.

So far we have access to games already played, but not those upcoming.

A small section listing the fixtures would be a welcome addition to the site.

guitareth
Reply to  Too Drunk To Be Offside

That’s a really good suggestion. Yes, we can find the fixture list elsewhere, but it would be very handy to have them prominently placed on Arseblog.com to help us see what’s ahead of us.

Title not won yet?
Sorry, but even if the Citeh faithful were to pray to The Lord Bergkamp, He would not answer them.

Even if He were minded to repeat His miracle of the Overturning Of The Great Lead, it would still require that He also decree that the plague of corona be brought forth upon the house of the scousers that they may not pick up a few points and make it impossible.

There was a point in game when we were defending a set piece and Pablo literally pulled Sokratis by his shirt and organised the line! If he can do that to Papa I’m sure the young guns will hear from him

I remember that moment clearly, too, and I thought the same thing!

I think a pacey City is not ideal for Mari (for any defender, for that matter), but chances are we will be playing deep and organized, and hoping to spring the counter — thankfully, our three main centrebacks at the moment (Mari, Mustafi, Luiz, even Sokratis) all have a good boot.

Play like we did today and we’ll get hammered. West Ham missed 2 simple chances and on another they go in, we lose and the match report is bleak.

Lets hope the Manchester is a high-paced spectacle filed of red cards with Citeh the eventual winner but in need of licking wounds that way or extra 24h rest may count.

Kind of expect a hammering at city. If De Bruyne is still injured though, we could hope one of our shots deflects off 5 people and into the net.

I meant if De Bruyne is still injured, there’s more of a chance of us not being ripped apart and can snatch something….maybe

They have lost 6 games in the league this season. Same as us.

How many lower placed teams or just EPL teams city hammered recently? Their defence is very beatable and we will take them apart. We have the players that can do it and a coach that knows City than any other coach xcept Pep.

How many teams manage only 2 shots on target at home vs West Ham? Sorry but we don’t get enough shots off, let alone in target, to trouble Man City.

“not too shabby”: an understatement if I ever read one 😆

I think he slotted in well today. Minimum of fuss. There were a number of iffy moments including the one he commited to Antonio but slipped and the Hammers man went clear with only Luiz left only to square behind his mate. Also one of several corners he was too close to Luiz leaving space behind for(I believe again) Antonio to knock it just wide from about point blank. So yes very encouraging signs but still issues to resolve but its just his first match in the PL. Lets see how it continues. Certainly looks assured on the ball but… Read more »

I think for proper balance, we need AMN on the right. He is better adapted to right full back than Sokratis, so we can expect more end product offensively and defensively. And I think despite Pepe’s trickery, we should start either Nelson or Gabi on the right in the Man City game. They can use both feet and link up with Ozil much better than Pepe.

Bellerin will surely come back into the side for the City game.

Yes, him too. Though he is still trying to find form and fitness. Honestly, either of Bellerin or AMN is better than Sokratis in that position. Even in their current state of fitness, form and work rate.

And yet you only gave him a 6 Blogs? Harsh, my friend, very harsh.

I thought he had a good home debut and was impressed that he was passing using either foot. I think that makes playing out of defence much easier when the press is on and where other CBs have put us in trouble by having to get it onto their favoured foot.

Perhaps he can show others how it’s done!

City are going to batter us.

I wonder what this means for Holding.

Our forgotten left footed centre back

Since when was Holding left footed?