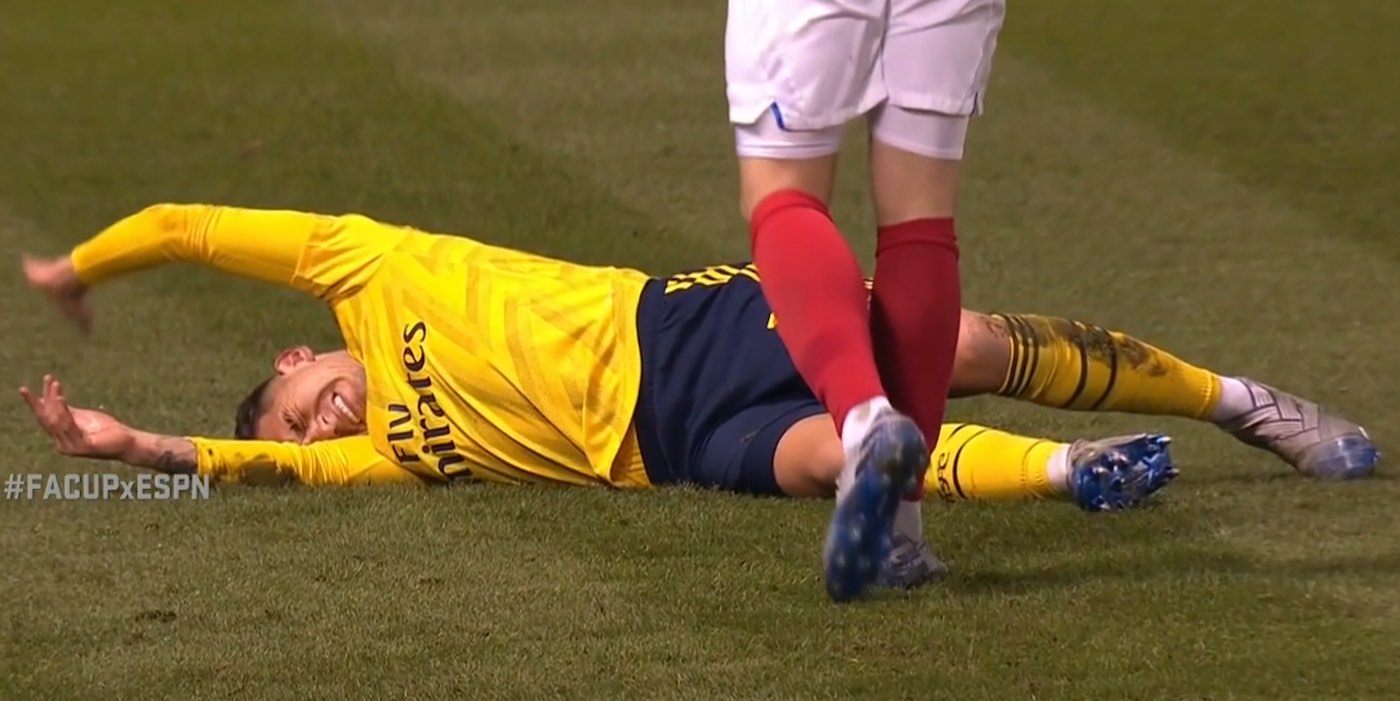 Arsenal have rather casually revealed that Lucas Torreira has suffered a fractured ankle, after a heavy challenge from Portsmouth’s James Bolton on Monday night.

At the very bottom of their latest team news update, the snippet on the Uruguayan says:

It more than likely means his season is over now, and it’s a blow Mikel Arteta as he prepares for the final part of this campaign.

Even though the load has been lightened by the Europa League exit, there’s still the FA Cup to play for, and lots of points on offer in the Premier League as we look to finish as high as possible.

Let’s hope that the fracture isn’t a complicated one, as can often be the case as it damages ligaments too.

Mikel Arteta will meet the press later today, so we might get a bit more info on the injury, but all we can do is wish Torreira a speedy and successful recovery.

Such bad news, hope he recovers as quickly as he can.

What a tw*t to have tackled him like that and Mike Dean to have let it go.

I might be in the minority here, but I thought the tackle was perfectly fine. Played the ball, foot wasn’t high, studs weren’t showing. Hard but ultimately fair challenge imo, just unfortunate that our man came off worse.

Ya Gooner
Reply to  AbsolutelyMarvellous

Last time I heard scissor tackles were straight reds regardless of winning the ball.

Dave M
Reply to  Ya Gooner

Mate you haven’t watched many arsenal games then. Pepe has had at least three of those on him and now torreira… No red cards yet… Saying that though… I thought it was too 😉

It “ appears” fair, but in the vast majority of these scissor tackles the only thing that saves players is their feet don’t get caught in the turf during the tackle, or in between the tackling player’s legs (which happened to Torreira). Continental referees don’t always let scissor tackles go without a booking if there’s excessive contact, even if the defender “wins” the ball.

These kind of injuries happen a lot in cup games because players from lower leagues overcompensate. Good referees should adjust accordingly – instead we get fools like Mike Dean and this is the result.

Fair comment. Tbh I find scissor tackles are always a weird one in terms of legality – is there any law that specifically forbids them, or is it all at the referee’s discretion?

Yeah scissor tackling is legal, but I think refs are supposed to card a tackling player if they slide in too early (because then they’re out of control when they make contact) or if the follow-through with takes out a player’s standing leg (excessive contact).

Two-footed tackles are illegal – and players like the Portsmouth defender use both legs to scissor tackle so it’s definitely a grey area.

Mike Dean is a cunt, who thinks he’s the star of the show.
Also, why the fuck does he have to be so animated when he awards a pen and points to the spot?? When little things like that aggravate you, it’s a sign of really disliking a person…just like my girlfriend

Sorry but that ‘robust’ tackle would have led to at least a yellow card if VAR had been in operation. And that moron Dean should have done something about it. There’s a fine line between robust and dangerous. I believe he crossed that line. Don’t tell me the fractured ankle was just unfortunate and somehow self inflicted.

I didn’t say it was self-inflicted.

Well blogs and James agree with you as explained on the arsecast. I chuckled when I listened as I thought that the tackle was not fair and if we had done it to them no doubt at least a yellow would be produced. I think it’s bs that people laugh when others say refs have it in for us! How much evidence do you honestly require. It seems refs conspire against us if you can’t see that then I think you are a wanker. Not you personally Absolutely marvellous

“Reckless” means that the player has acted with complete disregard of the danger to, or consequences for, his opponent:a player who plays in a reckless manner shall be cautioned (yellow card)

“Using excessive force” means that the player has får exceeded the necessary use of force and is in danger of injuring his opponent: a player who uses excessive force shall be sent off.

It was a full blooded tackle from Bolton that left much to be desired. Over zealous to say the least.
Wishing you a quick recovery our own Terrier.

Fuuuuck. What a thoroughly disappointing season for Lucas Torreira, the bloke must feel like it was barely worth getting out of bed for.

Torreira gets paid tens of thousands of pounds a week, seems like an exceptional reason to get out of bed to me.

The irony of being Rich — always harping about player salaries.

Some people are so bitter about the fact that players earn more than they do, so all their ‘analysis’ comes down to money

If you’re out of the team? your job is to convince the manager to pick you, with your work ethic and behaviour. If you’re injured? Your job is to remain professional, working your way back to fitness, and then try convince the manager to pick you. The clue is in the term “professional” footballer. I stand up for the money the players earn, its basic economics, supply and demand, and nobody should be able to put a limit on the amount that you can charge for your labour, certainly not the government, because if you don’t have the ability to… Read more »

yeah, I’m sure Lucas is happy as a clam laid up in bed playing with his piles of cash to keep him company as he is unable to run and play football. I’m sure he doesn’t care about the game anyway.

Yeah I thinking from a footballing point of view, but apparently that’s not what football is about now anyway.

And wasn’t even a yellow, ridiculous

Don’t think it was even a foul was it? (According to Mike Dean obvs)

Not even a foul

He looks to be a very, very good guy, but at the same time his body-structure doesn’t really seems to be well suited for british football

No he didn’t. Lets not overreact because one of our players got injured

Not sure what part is wrong. The guy clearly wiped Torreira out at full pelt. Studs were showing initially but the contact may have been in the scissor follow-through. The point was that any player could have been injured in that collision and “body-structure” (whatever that means) has nothing to do with it. .

He didn’t plough into his ankle as such, that makes it sound like he wanted to hurt him. If for example Torreira had got up and quickly took the throw in we wouldnt really have too much of a problem with the tackle. I understand because he’s now injured its frustrating but it wasnt a terrible tackle

But yeah, body structure has nothing todo with it

What, you mean because he’s not physically huge, but small in height? Come to think of it, you must be right, because Santi Cazorla was a giant of a man…!

You are right, buth Cazorla’s role was different. Maybe it was Torreira’s last game for the team and he goes back to Italy.

Cazorla’s role was different, true, but the original statement was about suitability for ‘British football’ in general, not specifically the defensive midfield position.

However, as has already been pointed out, there are other DMs we’d probably all agree are doing rather well in the Premier League, without being physical monsters.

You’re right, I wasn’t precise enough. But I still think that yes, he is both too small in high and not huge enough physically – especially: given his position.
Besides the players you’ve mentioned were all exceptional in given attributes:
Makelele was exceptionally strong
Kante has stamina comparable to nobody basically and…
Santi had unique technical abilities

…I think they were able to compensate their size, but Torreira (even if he is a very good player) is unable to do it and that’s why he is among (15th) the most fouled players in the league. To be fouled that much plus being 20 cm shorter than the avarage DMC’s – I think that almost naturally leads to injuries.

I suppose that if you accept that “British football” is supposed to have evil challenges by clodhopping neanderthals and useless, incompetent referees, you might have a point.

You’re right. From now on, Arsenal should only bid for wrestlers & rugby players & add a sumo wrestler in goal or CB

Colin McGregor is only 70 Kg. So he wouldnt be able to cope physically with English Football. But he could kick Mike Dean in the head.

This is an unpopular opinion if I’ve ever seen one

Mike Dean didn’t even consider it a foul and Jermaine Jenas thought it a good tackle. A full-on sliding tackle, studs up with scissor action to follow through?

I can imagine the uproar had it been Xhaka (and undoubtedly a red card) or PEA. Or had it been on Kane or Livarpool player.

I wonder whether this might give Maitland-Niles one last chance to grab a place in the midfield? 12-14 games is a quite a lot for Xhaka/Ceballos/Guendouzi to cope with and Willock doesn’t strike me as suited to the base of midfield.

Yesterday during Lyon – PSG, same action: a PSG player gets the package, ball and player. Result: yellow card. Precision: the Lyon player isn’t injured and finished the game on his feet.

Of course it’s broken. Why wouldn’t it be the worse case scenario?

Another Arsenal player with a broken bone and the ref thinks it’s ok.
It should have been a red card it because of the force used.

Bad luck and trouble… Hope it means he will stay next season…. Does this mean the manager using Guendouzee more often, or we he play AMN in midfield (the posiion he thinks he should play) MG shouldn’t be overplayed he still learning his trade…

I remember telling my mate that Torreira should have played against Olympiacos and be rested against Portsmouth. Get well soon Lucas the terrier!