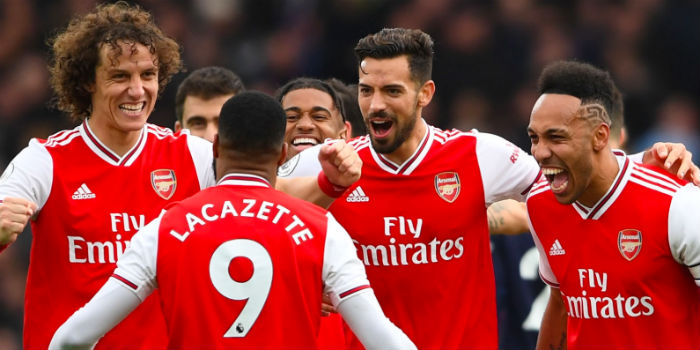 Mikel Arteta says the fact Eddie Nketiah and Alex Lacazette are both scoring is no bad thing even if it makes it difficult to decide who will start games.

Nketiah was given the nod to start the 1-0 win against West Ham, the third game in the last four he’s been picked ahead of the Frenchman, but it was Lacazette, who replaced him on 59 minutes, who bagged the all-important goal with 12 minutes remaining.

Both strikers have now netted three goals since Arteta took over and the Spaniard is pleased with the impact they’ve made.

“I have two strikers at the moment and they are making life difficult for me, but at the same time it is very good,” he told his post-game press conference.

“They are both scoring, both in a good moment. I decided to play Eddie today for the defenders they had and the gameplan we had, but knowing that Laca, if we needed a goal in the final moments, he was always ready to do that.

“I saw straight away, when I was talking to him and giving him instructions on the touchline, he was alert and focused and I could see he was really determined to go out there and score the goal that he did.”

Having also utilised Pierre-Emerick Aubameyang and Gabriel Martinelli as central strikers since he’s been in charge, it’s been notable that neither the Gabon international nor Brazilian have been given a sniff in that role in the last couple of weeks.

Asked if he still considers them capable of leading the line, Arteta responded: “Yes, they are but with the squad balance that we have at the moment for that position on the left, we don’t have five players because we are using one of them as a left back, who is not a left back.

“We are just trying to adapt to the situation we have today, try to put in the team the players to have a goal threat that can be successful for the team. That is part of managing the players we have.”

You have to wonder where we’d be had Arteta taken over earlier in the season when it was already clear that Emery wasn’t going to cut it. I think we would be comfortably in the top 4. Despite not always convincing the players seem to be on board with Arteta.

Agreed. But Emery has to be given a chance this season. I just think the board stuck with him a bit too long. It still won’t be smooth sailing for Arteta next year. I doubt we’ll be in the CL so the finds and draw of glamour football will be limited. We must give him time and I thinks the fans will.

It’s always ideal to have CL football to attract stars and get them to “buy in” to the team’s vision. Having said that, the player economy on this front seems to be evolving as well. The Premier League, besides having the most revenue and coverage, is also one of the most competitive, and that is definitely attractive to a lot of players. We can see this with multiple moves made by big money / good players going to potentially non-CL playing clubs (who of course have other qualities to attract players). I guess the difference is that if a we… Read more »

I hope having been dominated by struggling West Ham at home gives him a headache and brings out a reaction from the players. We can’t go playing every game being the underdog after 5 minutes.

Not sure why Arteta is so reluctant to use Martinelli?

Intrigued that Arteta doesn’t see Auba through the middle and Martinelli on the left as an option.

Nelson has played in the left too. Not sure why neither manager has wanted to play Auba through the middle more.

Maybe it’s because he struggled holding up the ball and couldn’t make the runs he does when played on the left. It’s not like he hasn’t played there for us. It’s just that he’s been more productive and efficient from that left side ghosting into the middle at the right moments.

Yes, he is very effective in the current setup with a super attacking LB (Saka) because he can be more attacking and make deep wide runs and play inside more too (with Saka wide) and get behind the lines. If we upped the tempo a bit more I think he and the whole system would be more threatening. I like that both Luiz and Mari try attacking balls from deep at times as it adds pace and variety to our attack, which is desperately needed. We are quite ineffective team when we play slowly out from the back as we… Read more »

Rotation. Play Martinelli today with Aubamayang in the middle and who plays against Man City? You could put them both in of course, but do that too often and you have knackered players and risk making our injuries worse. They shouldn’t be knackered, I know that, but injuries and the imbalances that places on the squad, and the fact they’re being expected to put more effort in during games than they were under Emery means tired players. Many are also youngsters, who shouldn’t be overplayed without a lot of caution. So I can see possible reasons. I’d be surprised if… Read more »

Lacazette give me a headache too!

No, that would be staying up too late to watch Arsenal play.

Lacazette and Ozil combining to score was like an aspirin and a glass of water today. Don’t you feel just a little bit better after that?

Martinelli on the left, Auba down the middle. There, you have your squad balance. Thank me after we’ve made top 4.

I was thinking we might see Auba lead the line against City with Martinelli on the left, but I’m not so sure after reading this. I don’t mind Auba on the left, as he still scores and works his buns off, but I really won’t if we’d be more impressive in attack with him playing where he really should be — but no criticism of Arteta here, as he doing well with what he has.

Arteta: l have 2 strikers.
Aubameyabg: am l a winger to you?

Auba should be playing centrally.

I don’t think we have a striker headache. Lacazette should start IMO. He is just that much more street wise particularly against this level of opposition. Nketiah today was industrious, made good runs but still a little delayed not to mention lacks the strength. Aubameyang should NOT start in the middle. He will lose way too many balls there for us. He is still better cutting in from left with ball played into space for him to run into, something he will have less chance of in the middle (unless its a better quality team who isn’t afraid to open… Read more »

I expected that sort of game. It’s always difficult at this time of the season, playing teams that are scraping at the bottom and fighting for their Premiership lives. I would much rather be playing a team that has nothing to fight for, than a Watford, West Ham or Bournemouth…

The order of the day today was nothing less than 3 points, however we got them.

It really frustrates me seeing Auba on the wing. But his control, track back is so good that he is a victim of his own perfection. But in the meantime, we are missing fire power upfront.