Arseblog News – the Arsenal news site
Home Staff Manager Arteta: Tierney and Saka have to challenge each other 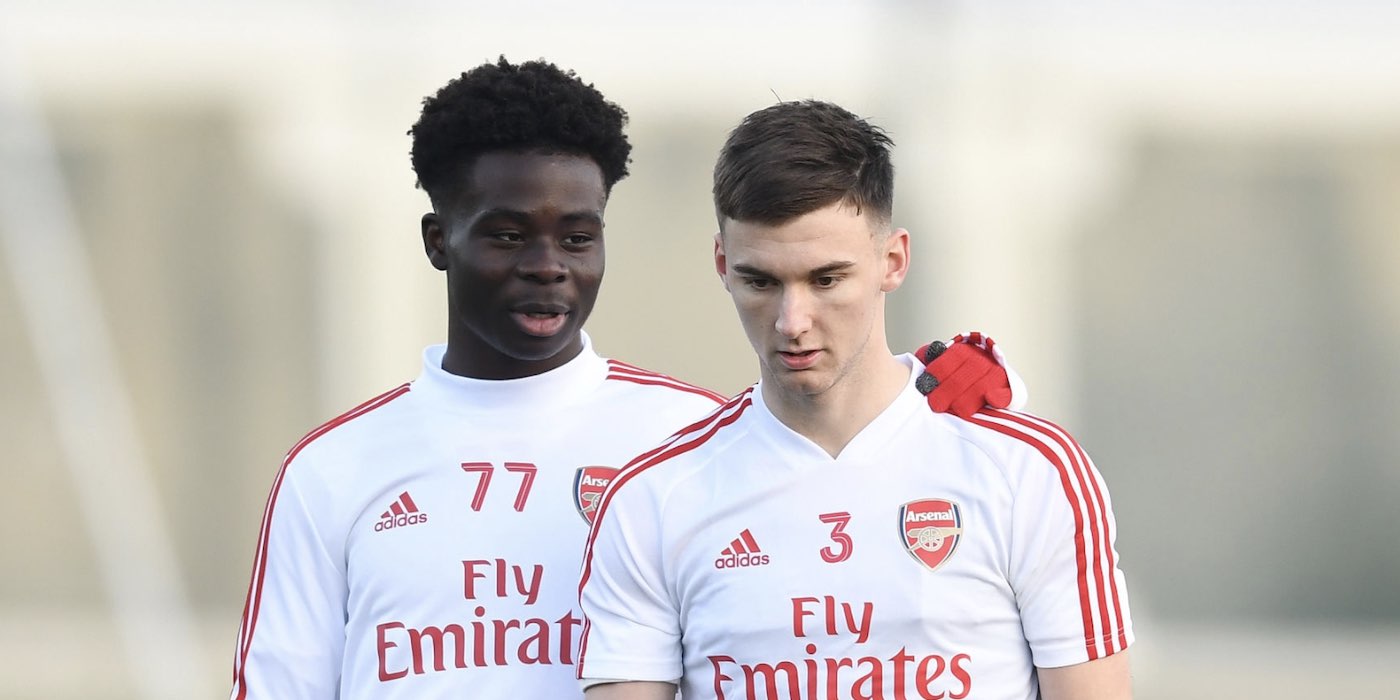 Having dislocated his shoulder back in December when Arsenal beat West Ham 3-1 at the London Stadium, Kieran Tierney is back in full training as the Gunners face the same opposition at the Emirates today.

It’s been a long-road back for the £25m summer signing, surgery and rehab have sidelined him since then, but he’s ready to stake a claim for a place in the side.

The issue he faces is the fantastic contribution Bukayo Saka has made since being thrust into the team on a regular basis because of injuries to Tierney and Sead Kolasinac.

The 18 year old is Arsenal’s most creative player this season with 10 assists to his name, and Mikel Arteta says the two have to bring out the best in each other as they battle for a place in the side.

“They have to compete,” said the manager. “They have to challenge each other and improve. Whoever is best will be in the position, which is a really good thing for the team.”

Saka played 90 minutes on Monday night against Portsmouth in the cup, but at 18 he’s got plenty left in the tank. It will be interesting to see if Tierney does get the nod today, with Wednesday’s trip to Manchester in the back of the manager’s mind.

There’s also a realistic scenario where these two aren’t necessarily in competition with each other, instead combining down the left hand side as a duo – but in the short-term it’s one or the other in the full-back position.

The Gunners face West Ham at the Emirates at 3pm today.

Saka & Smith Rowe in full training ahead of trip to Prague

Really want to see Tierney AND Saka in the team, Tierney is a proper full back & Saka, brilliant as he’s been, would be even better further forward with less defensive duties. Potentially devastating left side combination ?

I would add Martinelli to that list to make the left side brilliant.

Like Messi, Ronaldo, Henry, the duo we have atm and many others, they all started as wingers. Martinelli is made of goals, i think he will be moved upfront.

I’d really love to see Martinelli as a central frontman.

I think his directness will make space for others around him.

His mobility will cause defenders issues

Tbh I disagree that Saka would be better as a winger, and so apparently does Marcel Lucassen: “Bukayo Saka is the best example of where we want to go with Arsenal. He was a winger, but because he is not a Leroy Sané in small spaces, he will not get beyond top 30 best wingers. As a wingback, he can become top 3 in the world.. [& he can develop defensively w/good coaching.” (https://www.reddit.com/r/soccer/comments/fcza6t/marcel_lucassen_bukayo_saka_is_the_best_example/) If what Lucassen is saying is true, I’d much rather have a Lahm/Alves level wing back than like a Coman/Zaha level wing forward any day. Although… Read more »

100%.
Pirlo was an average CAM, became a legendary deep-lying playmaker.
Tierney has his hands full.
Best of luck to them both.

He was a World Cup, 2x CL, & 2x Serie A winning CAM! Far better than average! But tbf there was a reason a fading Milan team allowed him to move to a rival without much fuss aged 30

Limpar from the halfway line
Reply to  Public Elneny

Public Elneny
Reply to  Limpar from the halfway line

I’m not sure how his role differs from Mertesacker’s but he’s a pretty senior figure. I’d imagine his view on Saka is shared by other Arsenal coaches if he’s willing to air it publicly

Completely tangential point here, but the latest Arsecast isn’t appearing in Acast. Does anyone know why?

Tierney once again looking into the abyss in the photo…

That’s how most Scottish folk look.. ?

He does have Saka in his ear telling him “your place is mine, bitch”

Both are important for arsenal but i perefer saka cause he adapt quickly arteta’s playing style and he show as on the ground for tierney he needs more time.

Who would have thought…

Does such a thing even exist??

Yeah I like the idea of them combining on the left as the ideal scenario but, in the short term, it is gonna have to be one or the other at leftback

https://www.the42.ie/arsenals-irishmen-5036947-Mar2020/ off topic boys, but well worth a read. The reason so many of us Irish lass were drawn to the arsenal

This was an excellent read, thanks for sharing!

Huge Saka fan but don’t forget that Saka hasn’t been doing a lot of defending at LB because Xhaka has been filling in whenever he gets forward, which is always. With Saka further up the pitch and Tierney at LB Xhaka would be pulled out of position less often.

N, I disagree. These two are class and should be developed to play in the same team for another 10 years

Limpar from the halfway line
Reply to  gunnerpete

Yeah I don’t get it. Surely that’s the dream. We’re building for the future, why not start now?

Tierney has a fearsome cross. Saka can beat a man and looks up before firing into the box. In Martinelli and Auba we have natural born predators.

I don’t follow tactics like many do so maybe talking out of my arse, but I fail to see how we don’t win CLplave/fa cup/the league/World Cup/an Oscar/Eurovision with that combo

Is Saka giving Tierney a vulcan nerve pinch there to keep away any competition?