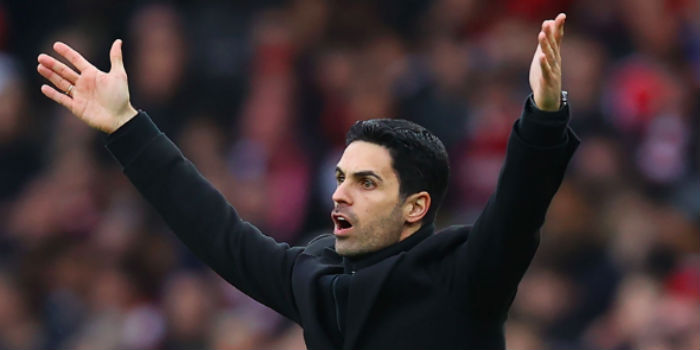 Mikel Arteta says Arsenal lacked aggression in the final third against West Ham and struggled to cope with the visitors ‘deep block’ on a tense afternoon at the Emirates.

The Gunners prevailed 1-0 thanks to a VAR-checked strike by substitute Alex Lacazette 12 minutes from time.

Despite having 60 percent possession we looked vulnerable on the break when we gave the ball away cheaply and were thankful for important saves by keeper Bernd Leno.

While the result continues an unbeaten Premier League run that stretches back to December last year, Arteta says there are areas that obviously need to improve.

In his post-game press conference, he said: “We had moments, obviously in the first half when teams are so compact and defend with that deep block – we gave a lot of simple balls away in dangerous areas, where we allowed the opposition to generate transition moments which they are good at.

While the stats suggest we’re riding our luck in certain games, one defeat in 12 games is an undeniable upturn in form from the tail-end of the Emery era.

Arteta says he has no intention of getting carried away. “It’s only turning a corner in terms of results,” he noted.

“A little bit in terms of the things I want to see from my team, but they were telling me now that ‘I’ve turned the ship around’, that ship still has to turn a few times more to see what we want to see.

“It’s part of the process, it doesn’t happen overnight, we are positive that we can keep going on this from the eight or nine weeks that we’ve been here.

“It will be down to the performances that we put in and it will be related to the results.”

Sell Aubameyang and Lacazette. Go and sign Richarlison, he’s a player on the rise,Very quick, aggressive, brilliant in the air, doesn’t stop running, only 22, and PL ready. With wingers like Saka, Pepe, Nelson, Martinelli, who’ll all continue to get much better, we need a focal point. Tierney also crosses really well. Auba + Lacazette will be 31 + 29 this summer, £100 mill+ for the pair is good money. We have good players in the forward positions, but the balance is just wrong. The PL is all about pace, power, aggression and stamina, Arteta seems to have given up… Read more »

The balance of our current attack clearly doesn’t work. When Liverpool signed Mane from Southampton, I remember plenty of fans and pundits rolling their eyes, and neither of Firmino or Salah caught anyone’s imagination originally. But all three are high energy, high intensity, aggressive forwards. To play high intensity, high energy pressing football, where you pin other teams in their own half, you need players with the right characteristics to play that way. Right now we don’t, Martinelli has potential, and Arteta has said that he likes Nkrtiah’s ability to press, but both are raw. We need a Giroud, but… Read more »

a giroud with pace?

id like you to show me who that is, because a giroud with pace is worth 100’s of millions.
his hold up play, touch, creativity and finishing are all top class.
his lack of pace keeps him out of peoples minds when they talk about world class strikers.

Giroud was brilliant for us, and is arguably Chelsea’s most effective striker. i think Aubameyang at 31 is going to dip physically, and if we can get back what we paid? Then we should do it, I don’t think his holdup play, or levels of aggression are good enough to lead the line. Lacazette is 29 this summer, this will be our last chance to get back the majority of our outlay, his value is just going to decrease from here, any bids around £40-£45million, we should jump at. We’ve seen with Pepe, he’s struggled, even though I think he’ll… Read more »

Please stop trying to encourage the club to sell Aubameyang. He’s our best player, and our captain, and if we can convince him to stay then we’ll have a guaranteed 20-25 goals from him next season, and that allows Arteta the chance to focus on building a coherent attack around him rather than starting from scratch. Did you see the goal Auba scored against Olympiakos? Have you seen a few of the other goals he’s scored for us this season? Please don’t denigrate his abilities as some kind of lack of aggression — that’s numpty talk. Zaha is doing absolutely… Read more »

Don’t worry I’m not advising Arsenal football club, and I have serious doubts they’re reading Arseblog’s comment sections looking for advice about which players to buy and sell…. Gary Neville was saying recently that Van Nistelrooy was a brilliant striker, but he felt United were a much better team with a different type of striker, because he unbalanced the team Ive been getting a load of stick on here for 18 months saying Auba + Laca aren’t suited to playing with each other, and it unbalances the team. I said that Pepe would take 6-12months to settle, and he wasn’t… Read more »

What is perhaps a good sign is that teams are coming to the Emirates and playing the deep block again: i.e., they are becoming afraid of us again and know that, while not consistently, the threat is there. Well done, Arteta.

Liverpool don’t seem to be struggling with a deep block too badly, they’re the champions of Europe, are on walking the PL title, having dropped 5 points all season, and we’re in March.

They get past the deep block by forcing turnovers, getting the ball Into wide areas, and attacking the penalty box.

Teams aren’t afraid of us, they just know we’re not great at breaking teams down, and we’re susceptible to a counter attack.

We’re the least dynamic, and least aggressive team in the league.

Are you richarlison’s agent?

I suspect richarlison poster in room with glued on auba jersey

I am not a fan of Richarlison but be people need to see that this Auba at the wing Laca at the center DOES NOT WORK. Auba cant play in the wing he cant even dribble. Yeah I know playing in the left he cut into the right into scoring position etc but how is is working so far? We were horrible yesterday aand have been for some time. We need to reconstruct our attack and midfield completely this summer or it will be the same movie

Doesn’t Auba have 17 goals or something this season? Seems to be working at least some of the time.

But yes, Arteta is clearly going to work on the midfield and a better balance to our attack this summer. Let’s not forget that he’s working with what he has here, and doing a good job.

Tell us why Richarlison would choose us over any other team that might want him. If he wants a change and is as good as you preach then he’ll be aiming higher than us with our ppossible lack of European football.

It’s about being ahead of the curve, Richarlison is 23 this summer, he’s only going to get better.

If we wait another 12 months? I suspect your right, he’ll go to a club on a much better trajectory than Arsenal.

We can pay substantially higher wages than Everton, and if we sell Auba and Laca? we could potentially make a Everton an offer they can’t afford to turn down as well.

Laca and Auba’s values from here on are just going to nosedive, where I suspect Richarlison’s is going to do the exact opposite.

Got to love his clarity and honesty! We can’t get complacent if we want to get our club back to where we belong. Hopefully we can keep improving and the club gets Arteta the support he deserves!

Sadly, the way life and football works is that we belong precisely wherever we happen to be at the end of the season. Otherwise you’ve hit the nail right on the head. I would love to see us back where we used to belong.

Auba will be sold if the right deal comes, and it all depends on us getting CL.
As much as we would miss Auba, it is understandable.
Laca will stay i think.

Eddie and Pepe looked a bit lightweight against giant defenders and we still can’t get midfielders shooting to help out.

Auba wide is often a waste and he needs to get around the box more. Martinelli underused?

As mentioned, Ceballos paired well with Granit. BOTH had some loose passes (particularly the Swiss) but also some very succinct ones. They generally tackled and harried well together and blocked and kept the Hammers at bay till last 10 minutes or so. Going forward, I still think we lack dynamism going up the vertical (perhaps something Guendouzi can bring) 3 times at least, Granit picked the wrong option preferring to splay the ball wide rather than find a way through the middle when things opened up there. BUT Ceballos as well, needs to find the space between the front men… Read more »

You know who has aggression. That 18 year old kid on the Bench.

Don’t really understand sokratis playing ahead of maitland niles at right back. We look so lopsided without a proper full back there.

Auba + Torreira + Mustafi must be sold