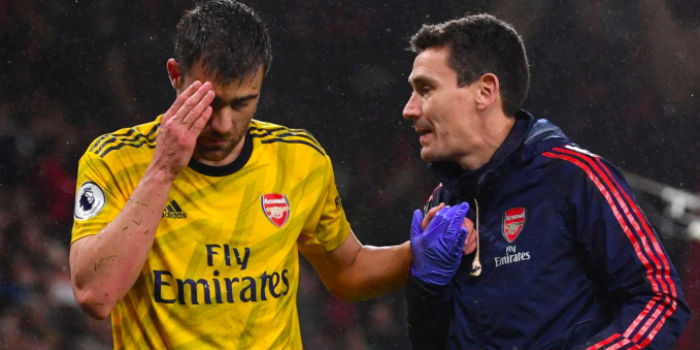 According to The Athletic’s David Ornstein, Garry O’Driscoll, Head of Medical Services at Arsenal, is set to stay at the Emirates after turning down the chance to join Liverpool.

The same publication reported in January that a deal for the Irishman to replace Andrew Massey, his counterpart at Anfield, was close to being completed. The Gunners even posted a job description on the website.

While it’s hard to say for sure why O’Driscoll, who joined the Gunners in 2009, has had a change of heart, it’s said that Mikel Arteta and Edu were both desperate to keep him.

Maybe the impressive start made by Arteta, who took over as Arsenal head coach in December, has played a part?

Ornstein also mentions that O’Driscoll has earned praise for the way he has handled the club’s response to the threat of coronavirus. While Mikel Arteta did test positive, there have been no reports of further players or staff contracting the virus.

The position requires a certain personality, not just medical knowledge. It is good to see we are able to keep people whom we value and think suit the job best.

If it’s true, fantastic news and congratulations to dr O’Driscoll for staying at the best club the world has ever seen!

*probably more dollars offered. Been a while since I’ve worried about the etiquette required here. My apologies. World is going crazy right now.

Whatever reasonable price it takes. There are some qualities and personalities that are highly difficult to replace and so should be reasonably appreciated for better motivation.

I wouldn’t worry about it too much anyway, world is indeed crazy.

I honestly, for the life of me, can’t understand why this got 11 down votes and zero up votes. Okay, the guy used a dollar sign and didn’t write “dollars” “, but it’s just weird to me to comprehend the fact that 11 fellow arsenal fans found it criminal enough to down vote a fan expressing his personal opinion, while those 11 probably didn’t even comment. We should encourage discourse, not discourage it, because the next time Goontang might think a hundred times before posting a comment, and maybe some time far away, the 11 of you might not have… Read more »

He shouldn’t be like that. Spew whatever the heck you wanna here bro. Keep it within/on the border of the law

Nah… We are just gargantuan

Could also be that he’s now a fan, having spent 11 years at the classiest club in the world and 9 of them were with the classiest man in football. People would even change their religion for much less..

I wonder how much the back room staff actually care about winning trophies. Like when the catering staff retire are they like “I had a pretty good career at Arsenal. Won two doubles and went invincible in ‘04. Most caterers can only dream of a career like like. Pauline has been down the road for over a decade and she hasn’t won shit.”

But she’s at shit. Surely, she has won it?

Most people would probably prefer a career in an organization, which is successful, has values you identify with and which do good things for its community to employment somewhere, where that is not the case. Does on-field success matter to them? I would definitely think so.

One thing that Sunderland documentary showed was how connected people working for a football club are to the faith of the club. How much they want it to suceed. I am sure the same holds for those earning a living at the Arsenal.

Pauline cooks a mean lasagna though.

As a young medical student 10yrs back, i was awed by his professional demeanor and would often dream of being a part of Arsenal medical team, dashing out on the pitch with him! Med kit in hand, running with cleats on, canon on chest – an inspirational figure for me!

Sorry to harp back to this but I think he would’ve been off had Emery still been with us….

Really good news he’s staying in more ways than one.

Nobody likes nor can thrive in a toxic/ failed-communication environment

I wonder of the humility of the players, too? They seem an arrogant lot and in many circumstances, those mentalities are quite demanding. I’d rather be with a humble group of people, making my own history as opposed to walking into someone else’s.

Often these decisions are also influenced by wife and family

It Is What It Is
Reply to  HelderHughes

I am glad he is staying with us, but if you look at how much more extra work he has to to in Liverpool, he made a smart move. Most likely next season we won’t be in Europe, so less traveling and more time with his family. If he goes to liverpool then he will have to cover over 65-70 games.

But if he had gone there, he would still have to live in Liverpool, rather than London. So he made the smart choice.

They failed to pay 40m pounds+1