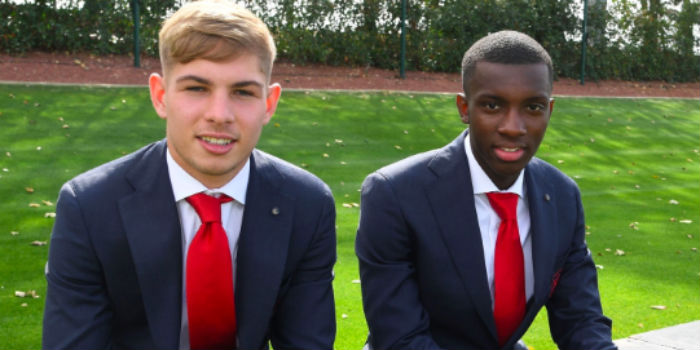 Emile Smith Rowe says he was surprised at Eddie Nketiah’s lack of game time at Leeds United but is happy to see his close pal thriving back at Arsenal.

The England under-21 international scored his third Gunners goal of the season on Monday night as Mikel Arteta’s side eased past Portsmouth to secure a place in the FA Cup quarter-finals.

Having scored five goals for Leeds before Christmas, Eddie now has eight for the season. That’s maths, that’s how it works. You add one to the other and get a total figure.

Anyway, we digress. Smith Rowe, who is currently having a whale of a time in landlocked Huddersfield, never had any doubts that Eddie would come good.

“Eddie’s been scoring a lot, to be fair,” he told Football League World. “He’s a striker and he’s always scoring goals.

“I’m close to him so I messaged him saying well done and stuff so hopefully he can carry on doing it for Arsenal.”

Like many onlookers, Emile was surprised that Eddie didn’t play much under Marcelo Bielsa. He was so surprised, he basically said the same as above in a slightly different way.

“I was pretty surprised to see that he wasn’t starting as many games as he wanted to.

“Everyone knows how good Eddie is and even when he wasn’t starting he was coming on, scoring, and showing what he can do.

“I’m happy that he’s come back to Arsenal and he’s scoring goals.”

Nketiah: We fought and battled well

ESR on no.10 next season and Joe Willock on loan please!

Thank God you are not our manager

Bro Nkeitah is solid should be starting week in week out

Don’t worry, the great news today is that Phil Collins is coming back with Genesis on tour. Arseblog will be so excited!

Lets all chip in for tickets, perhaps even a backstage pass?

Emile gives the most generic interviews I’ve ever seen -.-

Definitely the next Ramsey!

He speaks ever so well – Ramsey probably

His laugh also seems so fake. Just like Auba’s
I don’t mean that in a bad way, I fake laugh all the time as well, but not as much as Auba

Lovely stuff!…i particularly enjoy it when our players say nice things about each other. Fantastic, well done lads and well spotted blogs.congrats all around guys

ESR will be our next Ramsey!

Next up: Sokratis verbally slams the shite out of Ozil! News at 11! (fade to black, cue commercial for Depends undergarments…)

Smith-Rowe worth assessing end of loan.

We need to prepare for post Ozil next season even if he is sticking around to see out end of contract.

he’s a great asset to have but we should realise his limitations and be prepared to rotate him out at 50-60 minute mark.

Wenger knew this. And it should be explained to Ozil this is not a diss rather he needs to see performance as impactful over duration he is on. Its not abut how long you play, its how effective.

Do you have to wank over Özil in every post though? It’s boring and monotonous. Get over it.