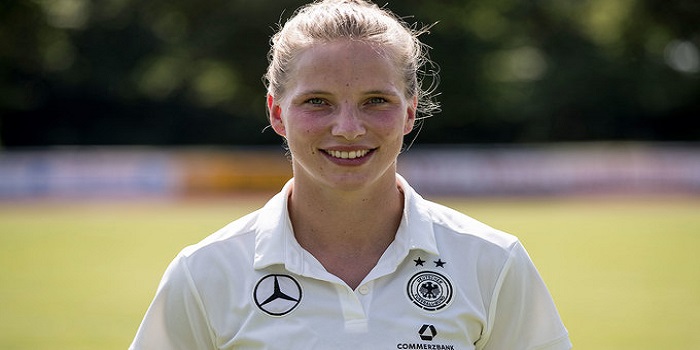 Former Arsenal Women player Tabea Kemme has reflected on her injury hit spell with the club in an interview with the German FA’s website. Kemme agreed to sign for Arsenal in the spring of 2018, but soon after agreeing to join the club, she badly damaged her knee cartilage.

Kemme was only able to amass a handful of brief substitute appearances for the club before retiring at the age of 28. Tabea says that Arsenal treated her with the utmost professionalism, but she said it became clear that her body would never allow her to compete in professional sports again.

“Unfortunately, because of my injury, I could hardly step on the pitch for Arsenal. It has always been my wish that I make the step abroad through football. I was able to fulfill this dream. In terms of sport, it was complicated for me because I couldn’t help the club. But personally, I took a lot with me – linguistically, culturally and also athletically.

“I got to know a completely different training philosophy there. I can judge things much better now because I have a frame of comparison. It is a pity that I was rarely able to participate in team training.” Kemme was on a two-year leave of absence from the police service in Potsdam to play for Arsenal, which was due to expire this autumn. Kemme says she hasn’t returned to the force yet because her knee has not sufficiently recovered.

“I still have to get to the point that I can make movements without thinking, without being directly in pain. When I have control over my body, everything is fine. But when something unexpected happens, for example when I step into a hole or change direction too quickly, I still have problems. I am no longer able to play at the highest load. I can no longer brake extremely from a full sprint.”

There is a curse when you join this club. The chances of getting an injury goes up by 250%. If you play left back or right back then it gets even worse.

That’s gota suck. When one thinks of the all the players who could have been but were robbed of the opportunity to be something @ Arsenal. Shiiiiiit. Widh you the best of what life brings after that but can take pride in knowing Arsenal deem you worthwhile and offered you a chance to play for the red and white.

I don’t play for Arsena, I am just a fan.

Gutted for the girl!
Might possibly not heal sufficiently for police work beyond a desk job never mind professional football.
What might have been, eh?

Good luck Tabea. By all accounts, although you never had the chance to play for Arsenal, you became a valued and inspirational team mate of the Champions.