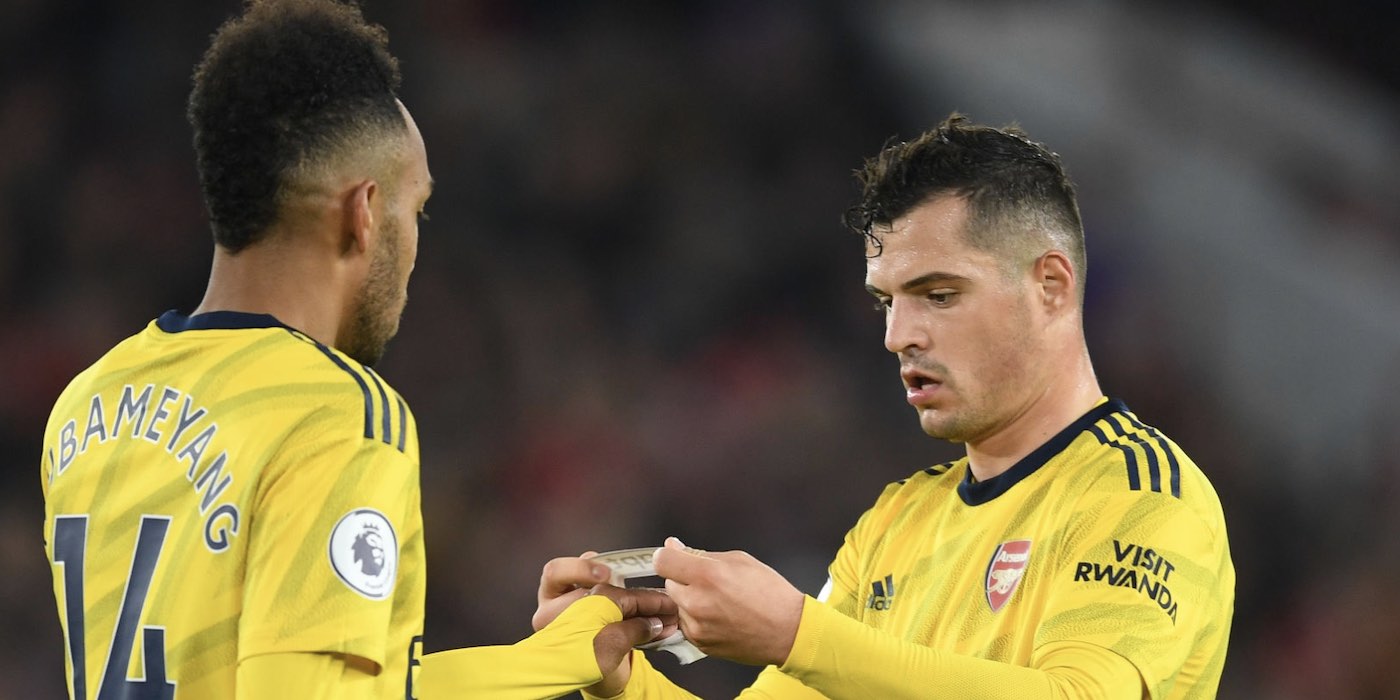 In comments that won’t knock the Earth of its axis, Granit Xhaka says losing Pierre-Emerick Aubameyang would be a ‘great loss’ for Arsenal.

The Gunners hierarchy have a tough decision to make regarding the 30-year-old’s future.

They can either cash in their star man when the transfer window opens in a couple of months time or they allow him to enter the final year of his contract knowing full well that his market value will drop considerably by January and that he could leave on a free in June 2021.

On the one hand, we’d free up some money to spend on a replacement. On the other, there’s no guarantee we could replace his goals, which to date stand at 61 in 97 appearances.

It was reported that the Gabon international had a number of suitors earlier in the year with Inter Milan and Barcelona both circling as negotiations over a new deal at the Emirates stalled.

While the financial fallout of the coronavirus pandemic remains to be seen, Xhaka thinks replacing his teammate will be very tough.

“If that [Auba leaving] were to happen, it would, of course, be a great loss for the team and the club,” he told SportBild.

“Auba is always dangerous and always good for a goal, and as a guy, he’s also really great. He is always positive, optimistic, helpful and very professional.”

Xhaka experience at the turn of the year is proof that things can change very quickly in football. In the space of a few weeks, he went from being Arsenal captain to agreeing a move to Hertha Berlin, from having played his final game for the club to being the lynchpin of Mikel Arteta’s midfield.
After a roller coaster ride, it sounds like he’s settled in for the long-term at the Emirates. He puts that down to the new coach’s influence.

“He [Arteta] convinced me of his ideas and his philosophy for the number six position and showed me a lot of appreciation,” said the Swiss.

“I’m glad that I could pay him back for this trust and I hope for the future that we can still make it into the Champions League and finally play in the international top league again.”

Lose Auba, Keep Xhaka…what a depressing time to be an Arsenal fan…

Leave Xhaka be, he just needs some love

Lack of Perspective
Reply to  Ben

Xhaka has been quite reliable under arteta. Minus the odd blunder but even Viera canned it sometimes. Keep that number in check, as i doubt it would be removed and xhaka is a good player for us.

loose_cannon
Reply to  Lack of Perspective

Ironically, mentioning Vieira puts Xhaka (and the rest of our midfield options) into perspective, just not in the way you intended. Xhaka has improved under Arteta but I don’t think he’s improved enough to be part of a title winning side yet.

That’s the crux of the matter really; we don’t have nearly enough players at that WC level. And while that’s the case we’ll continue to not challenge for titles and the players we do have at that level (or who have the potential to get there) will keep looking for moves elsewhere or holding us ransom.

Had you made this comment 10 years ago you wouldn’t need to comment for another decade because it was all truth then as it is now. The worst part is the latter, that when the group is not convincing, then the one or two that are good enough WILL leave!

Abhi
Reply to  Lack of Perspective

If Xhaka is useless then so is a good 60-70% of our squad, including all of our midfielders

Question you should ask yourself are you useful at all . How dare you look at somebody’s father ,brother ,husband ,son and say is useless. Just go and kill yourself u idiot

goonero
Reply to  Lack of Perspective

Lack of Perspective is a fitting name for you.

The difference between Xhaka and Vieira is “the odd blunder”? Like I get being positive but this is overdoing it.

Dress it up however you like but keeping Xhaka and losing Auba is fucking terrible news for this club and its prospects of any European football.

Cheer up, we were going for Kante but we got Xhaka. We will probably give Abu to Man utd, just like we gave Van Persie and Sanchez, and dont be shocked if we buy Andy Carol.

Looking at how stupid our board is maybe they will exchange auba for alexis with man u. Or maybe exchange micky for alexis.

To be fair Sanchez was done by then. We took the best of him, then took the second best of him, and swapped him as he lacked the power to be Sanchez anymore and took miki who brossia Dortmund did the same thing to.

I’m not sure the club has any choice but to cash in on Auba, and I fear we’ll get no more than around 30 million for him. 10 million for Mhki, 10 million for Elneny, gives us a bit of cash to some business, but I dont think it’ll be used on a striker. We need a creative midfielder urgently and one that will also chip in with goals. We also need to sort out Saka’s contract, if we lose him to Liverpool it will be a disaster because that boy is going to be a star.

I feel like after every time a good player runs down a contract and leaves (or negotiates an insane extension), we resolve to sell before they lose all their value. But every single time an exception is made due to their current importance to the team (after Van Persie, Walcott, then Alexis and Ozil, then Ramsey, now Auba and Saka). Of those that have left, only Van Persie had a good final season, and neither Walcott or Ozil were worth their exorbitant extensions Can we please learn our lesson and prioritise long-term over short-term for once? If Auba doesn’t agree… Read more »

At some point Aubameyang is going to dip physically, giving a 31yr old a three year mega deal is risky It’s whether we trust the club to replace him adequately or not. Ive been slated for this before, but I still stand by it, I’d sell both Lacazette and Aubameyang, and punt the lot on Richarlison, then have Nketiah and Martinelli competing with him, it’s inexperienced, but we’re very much a team in transition. Richarlison is a player on the up, he’s two footed, brilliant in the air, aggressive, great stamina, PL experience, only 22, he’s a real handful, and… Read more »

How much do you think Richarlison will cost?

£50-£70 million maybe? But he’d be cheaper in wages than both Lacazette and Aubameyang. Signing a 23yr old on the way up, and selling a 31yr old who’s only going to lose value, makes sense. Our attack doesn’t function, Lacazette, Aubameyang, Ozil, Pepe, sounds great, but it doesn’t work. We’ve gone from Ozil, Iwobi, Mkhitaryan in the wide areas, who all like to drop into pockets, and have the game played in front of them. Onto Saka, Martinelli, Nelson, Pepe, proper wingers who are direct, and play on the front foot, and have good delivery. We need a physical No9,… Read more »

Feels like the rvp situation all over again.
Our top goal scorer and captain.

I agree about the RVP comparison, but Auba was made captain with roughly18 months on his contract and no intention to sign a new one, so if the club wanted to avoid the situation that the captain leaves, they should have made someone else captain.

It will be very interesting to see the pandemic’s impact on market values and transfer fees. Perhaps just the reboot button the professional game needed.

While this might be an unpopular opinion, I believe that Xhaka can be a member of our title winning squad. He’s not your MF general but he does a job on the left side of the MF. He will excel playing on the left side of a MF with a MF general like Partey or Ndidi at the base and someone like Cebellos on the right. He has limitations but he has also been a victim of a poor setup and an unbalanced squad.

Abhi
Reply to  Me from Here

, I believe that Xhaka can be a member of our title winning squad. He’s not your MF general but he does a job on the left side of the MF……..
﻿Title wining squad…sorry… I just don’t get where you’re coming from…

Finds the one with red with white sleeves

How much do we get if we qualify for CL? That’s the amount we should sell auba for. Or we sell auba and get a rock solid CB + get a powerful CM. Either partey for laca straight swap and arteta buys a striker of his choice, or we buy a CM and keep laca.

How easily can we integrate someone else into his position?

We also have Freddie and Mikel who understand what is required to excel in that left forward position.

If he does leave our other players may reconsider their contracts.

We have these players out of contract 2021 season:
Saka
Auba
Ozil
Sokratis
Luiz
Mustafi

And these out of contract the following season and also need renewing now if we don’t want to end up in the same position:
Laca
Guendouzi
Kola
Chambers
Nketiah
Martinez

Seems to me that one of the strikers goes, the other will have a new contract.

Probably the same for defenders.

I certainly hope that Özil would reconsider his contract in such a case.

It seems we are well behind on the renewing schedule. With the wage cut, would more players also reconsider if we don’t make the European places and it will cost them 12.5% next season?

Saving us money in short term, affecting us in the long term. The story of the Kroenkes.

I don’t get what the fuzz is about. Of course he is our best player and sure he is leaving at his prime. Should be prone bout that. Honestly Arsenal Fans gotta have neurotic disorders/fears bout to be left.
No…u sound like a defiant kid!
Coquelin, Gibbs, Sagna, Jack, Frimpong, Titi, Cesc, Kos, Clichy, Flamini(milan)….Can’t think of any strikers tho

I think we should sell Auba for 15million GBP, but not buy anyone during this transfer season. Let’s ride out this summer transfer window until the recession is over, so we can pay higher money for someone who would currently cost us less.

There is no doubt in my mind that Xhaka has improved immeasurably under Arteta. Is he still good enough to be the linchpin in Arsenals midfield, that’s still open to debate.
In terms of Aubameyang, if he won’t sign a new deal, sell him. As much as i would hate to see him leave, Arsenal is not just 1 player, especially one who want’s to be somewhere else. There is always another player out there who can score goals….

Auba is such an important player for us. Hopehe stays. Cant wait for the season to begin again.