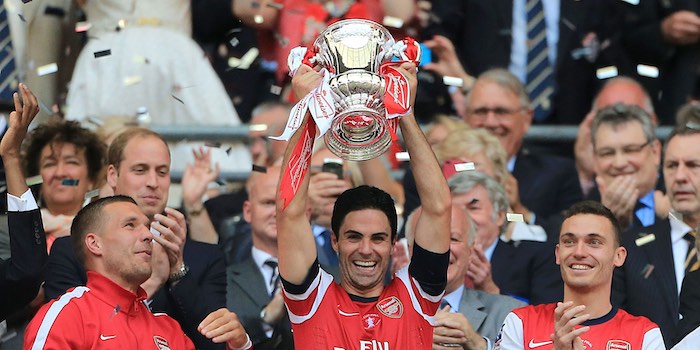 The FA have confirmed a provisional timetable for the resumption and completion of this season’s FA Cup with Arsenal set to play their quarter-final tie with Sheffield United behind-closed-doors at Bramall Lane on the weekend of June 27 and 28.

Mikel Arteta’s squad had been due to face the Blades back in March before the boss’ positive coronavirus diagnosis brought a shuddering halt to top-level football in England.

The semi-finals will take place across the weekend of Saturday 11 July and Sunday 12 July, with the Emirates FA Cup Final to be played on Saturday 1 August. It’s expected Wembley will get the nod to host the latter stages of the competition although venues and kick-off times haven’t yet been confirmed.

News of the FA Cup’s return comes hot off the heels of yesterday’s confirmation that the Premier League will return on 17 June with all 92 outstanding matches set to be televised in the UK.

“The competition has been an integral part of the English football calendar for nearly 150 years, and we’d like to thank the Premier League executive and clubs for their support in scheduling the remaining matches during this unprecedented time.

“This has been a difficult period for many people and, while this is a positive step, the restart date is dependent on all safety measures being met. The health and wellbeing of players, staff and supporters remains our priority.”

It remains to be seen what format the FA Cup returns in next season. Usually, qualifiers for non-league sides would start in August, however, with no date set for the resumption of amateur team sports, it seems hard to believe they’ll be able to take part. If feels like a streamlined competition is an inevitability, especially with so many smaller sides struggling financially.

Arsenal 2-0 Man City: By the numbers

Wow. The final in an empty Wembley. How depressing….and pointless.

Ya Gooner
Reply to  DrabWilly

No football – the sensible option.

Why don’t they wait and see who is in the final to minimise any travel required.

Actually they should be maximizing the travel required to keep fans away from congregating outside the stadium. An Arsenal v Chelsea final at Wembley – in August when restrictions have been lifted – spells trouble; they could move it to the Millennium Stadium in Cardiff (I don’t want us winning the FA Cup final at another Premier League stadium!).

Fair point. But it’s the same argument .. wait and see. Arsenal v Chelsea in Carlisle would tick the box.

Other than the new Sp*rs stadium 🙂

Seriously though, Playing Chelsea in Cardiff without fans having
to risk public transport, might exorcise the nightmare from travelling in 2007

I think they should cancel it and just hand it out to the team whove won it most in the last 5 years. Safest and fairest option…

Tiny
Reply to  The Spoon

That would be unfair. Give it to the team that has won it the most times in the competitions history instead.

It would be Arsenal in both cases ?

I’m happy Arsenal are still in this competition, but with this added fixture and the Man City game, I fear the squad will be pushed to, and maybe beyond, its breaking point fitness-wise soon after the restart. Arteta is likely going to have to be very willing to rotate and use young players in some of those early games.

If you believe the stories of the experienced player exodus this summer and next then the young lads will need to step up and take the club forwards so we may as well throw them into the action now while the other league teams are also in disarray following the lay off.
Let’s face it there is no money available to replace Auba, etc.

Richie
Reply to  Timorous Me

There will be five subs allowed per game to ease the burden.

With restrictions on their use.

Imagine, holding the cup up to an empty Wembley. Pointless and depressing.

But in history 2020 will be the year of the Gunners 14th FA Cup victory and no one will remember that none of us saw it happen.
How can a trophy in the cabinet be “pointless”?

They haven’t even got a cabinet, have they?! ?

It won’t be pointless or depressing because there will be millions around the world watching on TV.

It could be our chance to win a silverware this season who know! And it will be memorable a cup won during corona-virus pandemic.