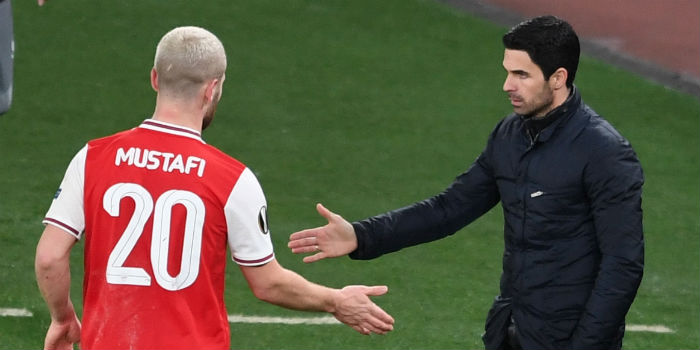 Told by the club that he was surplus to requirements last summer, he was left out in the cold by Unai Emery when he failed to secure a move and looked set for a campaign on the bench. He looked pretty disconsolate about the situation and spoke openly about the abuse he’d had from supporters.

Game time in Europe and the League Cup helped him build some much-needed momentum and when injuries struck the squad he was on hand to take his chance.

Mikel Arteta seemed to look at Mustafi as a project, admitting after the 2-2 draw at Chelsea in which the German had caused the situation that led to David Luiz being sent off, that it was his job to improve players so they don’t make individual mistakes.

That forgiving attitude has gone down well with the former Valencia defender who admits his new coach has been a breath of fresh air.

“Each one of us has benefitted from this arrival,” Mustafi told Arsenal Player.

“He has brought a very clear identity and a very clear idea of how he wants to play football, but at the same time he gives you space to make your own decisions because you are on the pitch and you know exactly what the coach wants from you.

“I think as well he has been listening into the changing room and listening to the players to find out why things were not working out before. Sometimes we don’t realise how difficult it is to be a coach because you have so many people that you have to make follow your idea.

“Sometimes players are happy, sometimes players that don’t play are not so happy, so it is not easy to have all on board and all agreeing with your ideas and philosophy. But he has managed to do that and in this short period it has been something very difficult to do, but he has done it. That is why we created a bit of momentum and we are heading in the right direction.

“I have benefitted from his arrival and his coaching. When you are 28 years old, you think you have heard everything and then a coach comes in and you still learn and hear things that you you have never heard before.

“He has been incredible since his arrival. He has shown his aura and his personality just shows that he is so convinced of the way he thinks football should be and how he wants his team to play, and it you just agree with it and soak in all the information.”

It’ll be interesting to see what Arteta does with Mustafi when the campaign ends. The German, like a number of others, will be heading into the final year of his contract and unless we’re planning on handing him an extension – almost unthinkable a few months ago – he could well be sold.

The vast majority of what Mustafi does is very good, it’s just the regularity of his brain farts. He’s had a few already under Arteta, the short ball back against Chelsea, that led to the equally erratic Luiz to be sent off, but after that early mistake, Mustafi went on to play a blinder, and was probably our best player, which pretty much sums him up….. Something got to give at centre half, Sokratis, Mustafi, Luiz all with just 12 months remaining, and with Chambers, Holding, Saliba, Mavropanos giving us 7 senior centre halfs, the very real possibility of no… Read more »

Yep, we lack quality and Mustafi is a key reason why.

“Hopefully the Kroenke’s realise there’s never been a better time to invest”. Sorry mate but Kroenkes never “invest”. At least not in Arsenal Football Club. They will continue to suck the soul and blood out of OUR club. I am certain of it.

i’m certainly no fan of the KSE, but we have invested since 2013, we’ve just invested really badly.

Now they’re majority owners, maybe they’ll recognise this as an opportunity, and not a stumbling block.

Arteta has not done anything amazing (like winning a trophy or playing great footbal or be in the job for even 6 months), yet, the good feeling he has managed to create within the club and with fans is refreshing. I truly hope once football comes back Arteta goes on to have a good career with Arsenal.Always liked him as a player too.

It’s a shame Mustafi is.. well, a little crap. On his ggood days he can he very good and he seems a smart guy, always enjoy his interviews. Lot more to be done to convince me he’s worth keeping around though.

I know that for many Mustafi is a figure of fun. An emblem for an Arsenal they want to leave behind, and who can blame them? The mistakes were just too frequent to ignore. It’s funny how football can provide redemption and it does feel as if people are prepared to give him another chance. It reminds me of when I was just a school kid and we had a lad in class who was a bit slow, as they used to say back then. Poor old Benny Smith was terrified every time the teacher asked him a question because… Read more »

Praise the lawd, Pete’s back!

Your heart is always in the right place.

He is not a top defender, partly the reason why we cannot offload him. He is distinctly average along with most of our defence for the last decade or so. Koscielny was probably the best we’ve had since signing Sol Campbell up back in the day. That says a lot, but even Koscielny wasnt world class, just good. The issue was with Wenger’s style and judgement on defenders and it been our Achilles heel ever since. Hopefully this becomes an era under Arteta where this improves, but it starts with shipping out most of what we’ve got currently.

If you could stamp out the regularity of his mistakes? You’d be looking at a really top centre half.

He has the attention span of a goldfish, and at 28, unfortunately I don’t see him losing the mistakes from his game.

He has a lot of qualities, but lacks the necessary concentration, which makes him a liability we can’t afford to keep carrying.

Any type of offer which ensures we don’t record an operating loss, and we should sent him on his way.

Theres obviously a very good player in there somewhere and if arteta can somehow find it then I sont see anything wrong with an extension. Plus we may get a fee for him in a year or 2s time.

Was expecting to find Santori in the comments.. hope he’s ok I haven’t seen him here in a while

I miss him too.

Mustafi, Popa, Luiz – Let’s say you can only keep one.

Do we keep Mustafi because of his age as a depth player or Luiz for his leadership in the room?

Personally, I’d keep Papa. Because he is the best from that trio.

hes literally the worst of the trio, Luiz is old, Musti is the best of the 3 on his day.

Well I remember, when Emeri arrived, Mustafi saying something like “I feel rejuvenated, it is so great when the coach tells you exactly what you need to improve”, hinting that he didn’t get enough clarity from Wenger.

I can’t remember him saying that, but I’d be wary of such a fellow. Feels like one who is keen to say the “right” words just to get ahead.
Are most players not like that though?

Can’t wait for the premier league to kick off again!

Mustafi is back, versatile, handsome Captain Redbird.
i admire the man based on his awesome ability , to recover from a horror show and become mr reliable………..